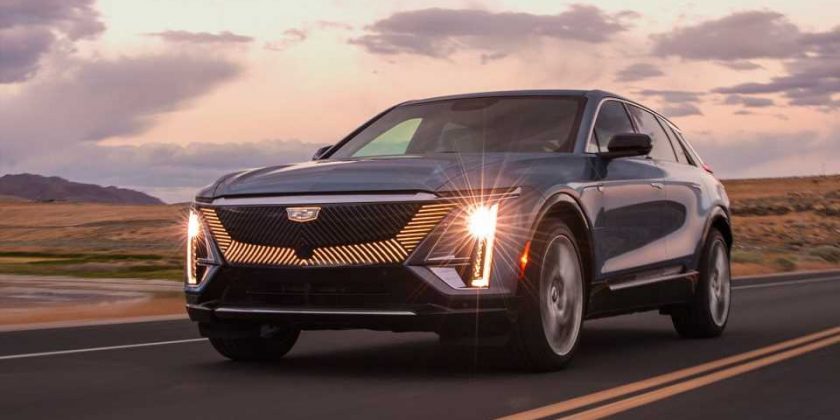 On the eve of Cadillac’s pivot to full electrification—the 2023 Cadillac Lyriq electric SUV reviewed here is the first step—we note how the brand came to be defined by the vehicles at its lineup’s margins: the now iconic Escalade SUV and a bunch of V-series supersedans. Stuff like the XT4, XT5, CT6, XLR, and XTS came and went, instantly forgotten seemingly even by Cadillac. Those that still hang around today do so as uncompetitive placeholders that wait to be supplanted by an EV.

But where might Cadillac be today had it not poured resources into chasing the ghost of BMW’s 1990s Ultimate Driving Machine glory? What if it had passed on building thrilling sport sedans that luxury customers had already begun shunning, instead leveraging the Escalade’s cachet on an expertly executed supporting cast of smaller, more mainstream SUVs? We think we may have found an answer: The Lyriq EV just might be the stunning, surprisingly excellent confluence of the true and alternate Cadillac timelines.

That’s because the Lyriq is the brand’s first mainstream product in generations to so obviously enjoy the sort of engineering attention lavished on its halo products. A total reset for the brand, Cadillac’s first-ever EV reveals a willingness to grow from the middle out, not top down. The Lyriq therefore arrives as a midsize luxury SUV, thus occupying one of the hottest market segments. It’s as pragmatic as it is groundbreaking: When the fully electrified lineup it portends comes to light, the Lyriq will be just another volume seller equivalent to today’s XT5 or XT6, only you’ll remember this one.

The Lyriq looks nearly identical to the concept version. This is the first production model wearing Cadillac’s long-evolving Art and Science design theme to actually place its headlights in the corner-mounted vertical strips, which house running lamps in every other vehicle. (The horizontal “eyes” at the leading edge of the hood are turn signals.) A long hood, tapered roofline, and huge wheels give it show-car looks, and all the exterior lighting can be animated and choreographed, including the backlit pinstriping on the gloss-black “grille.”

EV development increasingly involves a “top hat” (or body) mounted on a skateboard-style platform with flexible dimensions; in this case, the Lyriq’s distinctive top hat sits on GM’s Ultium electric vehicle architecture. (The Ultium hardware will support nearly every new electric Chevrolet, Buick, and GMC, too.) The Lyriq features a structural, floor-mounted battery and provisions for front and rear electric drive motors, though the examples we drove in Park City, Utah, were rear-wheel-drive, rear-motor examples. GM pulled the Lyriq’s launch forward by several months, and the rear motor unit shared with the GMC Hummer EV was ready to go. The front drive motor on the coming AWD models is new and specific to the Cadillac and needs more development time—its arrival coincides with the Lyriq’s original launch timing.

Against anything from Tesla or Lucid or even conventional luxury SUVs such as the BMW X5 or Mercedes-Benz GLE-Class, the Lyriq’s specs are average. Its single rear motor produces 340 hp and 325 lb-ft of torque and motivates nearly three tons of Lyriq. The lithium-ion battery is made up of 12 modules and has a Tesla-like 102 kWh of capacity to deliver an EPA-estimated 312 miles of driving range. The suspension is multilink front and rear (five links per corner); that it does without electronically adaptive dampers, air springs, or other software-enhanced trickery is particularly surprising given GM’s expertise in such technology. Instead, the Lyriq rides on coil springs and “Passive-Plus” frequency-selective dampers.

However modest its specifications, the Cadillac comes together beautifully on the road. GM’s world-class chassis engineers landed on an ideal ride/handling mix, delivering supple comfort, keen noise isolation, and taut body control. This is a big, heavy vehicle, measuring nearly 200 inches long and 86.9 inches wide including its side mirrors, yet its vice-free setup and near 50/50 front/rear weight distribution help it feel light on its feet. The Lyriq corners flat and is unperturbed by bumps in the middle of bends, though the long wheelbase and somewhat sedate steering ratio can lead to busy hands on ultratight, switchback-intensive roads.

The Lyriq’s acceleration is sufficient, not thrilling. Figure on 60 mph taking about 6.0 seconds. We also noticed a programmed softening of pedal inputs, which means no matter how eagerly you jump on the accelerator, the motor hesitates before ramping up its power delivery. The delay is similar to asking for a downshift in an internal combustion vehicle, and it keeps occupants’ heads from whipping into the headrests. Together with the secure handling, smooth ride, and utterly silent interior—it is crypt-quiet thanks to traditional sound-deadening and active noise cancellation—the dynamics are genteel and refined. Perfect for, yes, a mainstream luxury SUV.

Want more? The dual-motor Lyriq will bring 500-ish hp later this year, and a Cadillac engineer hinted with a wink that the brand’s V performance badge will stick around through the transition to electrics.

The Standard of the World?

It’s been at least half a century since Cadillac interiors lived up to its old “Standard of the World” boast. If the newest Escalade turned the tide for the better, the Lyriq raises it even more, being the rare modern Cadillac whose interior not only matches but might also exceed its asking price. That price, by the way, is just $62,990.

GM finally signed off on bespoke switches, buttons, and the like for Cadillac, many of which appear here for the first time and aren’t shared with Chevrolet, GMC, or Buick. The expensive-looking and -feeling parts are several notches above those in today’s XT4, XT5, or XT6. Precise fits and thoughtful touches, such as the huge and intricately formed metal speaker grilles on the doors or the stitched leather lining of the large drawer that slides out from the dashboard, rocket the Lyriq into contention with the likes of Audi and Mercedes.

The cabin also is huge, as it should be: The Lyriq’s 121.8-inch wheelbase is just a few inches shy of a Mercedes-Benz S-Class’, and the rear seat is limousine-large. As in the Escalade, there is an incredibly crisp and easy-to-use 33.0-inch touchscreen extending from the left windshield pillar to the center of the dash. Nearly anything on-screen that looks like an icon is a pressable “button.” Shortcuts to audio, navigation, and phone menus live across the bottom of the display, and swiping left or right on the central area of the screen calls up a deeper roster of buttons for more detailed menus and settings.

Physical controls are limited to the steering wheel buttons, the row of metal climate control tabs below the display, and the central tunnel’s knurled control wheel and volume scroll knob. The touch- and physical-input control mix strikes a happy balance between wow factor and everyday frustration-free usability. Even the metal paddles you pull to release the doors from inside are both different and satisfying to use. The flush buttons you press to enter the Lyriq are perhaps less so, as they merely pop the doors open, requiring a pull of a little handhold on the front doors to complete the action or, on the rears, grabbing the trailing edge of the door and pulling. No complaints on the liftgate release, though: As on the Escalade, you simply punch the Cadillac crest on the tailgate, and the panel motors open.

Those looking for nerd-out levels of customization and software that lets you change the horn to a fart noise will want to stick with Tesla. Same goes for anyone looking for a quicker EV SUV. But the Cadillac is hardly a Jitterbug phone on wheels. Over-the-air software updates will be capable of delivering power increases, new choreography for the LED exterior lighting, and other enhancements.

And Cadillac is deadly serious about ensuring its customers, many of whom likely won’t be the EV fanatics or early adopter types Tesla enjoyed early on, are supported in their electrification journey. The brand trimmed hundreds of dealers unwilling or uninterested in selling EVs from its network. It will also connect buyers with home-charging installers and provide a mobile cable setup with switchable plugs that can fit 110-volt household outlets, a variety of 240-volt NEMA outlets, and any future socket that might crop up. Customers can also choose an option for two years of truly unlimited free charging at public EVgo stations.

Cadillac also gets the Lyriq’s most critical EV-specific feature very right. The one-pedal drive mode, which uses the motors to slow the car while generating electricity to dump back into the battery when the driver lifts off the accelerator pedal, is consistent and predictable. There are three settings: Off (the Lyriq coasts when you lift off the accelerator), low (0.1-0.2 g deceleration), and high (up to 0.3 g of deceleration). Although the pedal feel is somewhat artificial, the handoff between the regenerative braking function and the friction brakes is imperceptible. There also is a pressure-sensitive paddle on the left side of the steering wheel you can pull to call up to 0.35 g of braking on demand to slow the Lyriq regardless of the one-pedal setting.

A proper review of the Lyriq’s EV-ness, including how it charges and what it’s like to live with day to day, will need to wait for a full instrumented test, but our experience with this luxury electric SUV so far reveals it to be the best new mainstream Cadillac in some time. All the brand’s activities over the past two decades have led it here, to this moment. And although we’ve enjoyed Cadillac’s amazing sport sedans, the well-executed Lyriq shows Cadillac didn’t shrink at the opportunity to show a broader segment of buyers exactly what this American luxury brand is capable of.