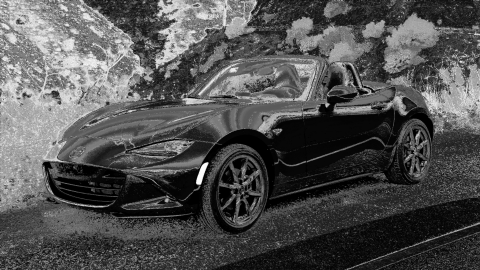 It’s roughly 40 miles from the western fringe of Culver City to the roads that snake through the Santa Monica Mountains. These roads inspired generations of weekend racers and dynamics engineers to fine-tune their cars. They also match, in tone at least, those where Mazda’s R&D team first ran a well-disguised Miata prototype through the canyons further north in Santa Barbara back in 1985. Considering the Miata’s often-told backstory, it’s no stretch to say the little roadster wouldn’t have existed without Southern California’s geography to urge it on.

With a day to kill in Los Angeles, I figured a run up the coast through Malibu and on to the peaks and canyons to the east would be a useful—if obvious—way to revisit a model that endures despite all odds. For the same reason, cliches are repeated so often but sometimes obvious is the best choice. And so, as we trail off a year on the brakes and roll onto the—oh, I don’t know, throttle of normalcy?—revisiting the MX-5 on a quiet road above the Pacific Ocean, the kind of place where the Miata ethos was born, seems like an ideal way to add color to a Miata refresher.

Let’s see how that goes.

If you haven’t thought about the MX-5 lately, here’s a refresher. The compact roadster, now well past its 30th year in production, is a pure sports car that shares an architecture with no other vehicle in Mazda’s lineup. It’s lightweight, fuel-efficient, and fun at reasonable speeds. Rear-driven, with a naturally aspirated motor and a six-speed manual, it comports itself elegantly and its controls are tactile and satisfying. Its suspension rolls and pitches a bit, which is a feature, not a bug, and for the most part contributes a characterful undulance to its handling. Drivers accustomed to dead-flat cornering on racing circuits tend to read such tuning as imprecision, but that’s what aftermarket anti-sway bars are for. 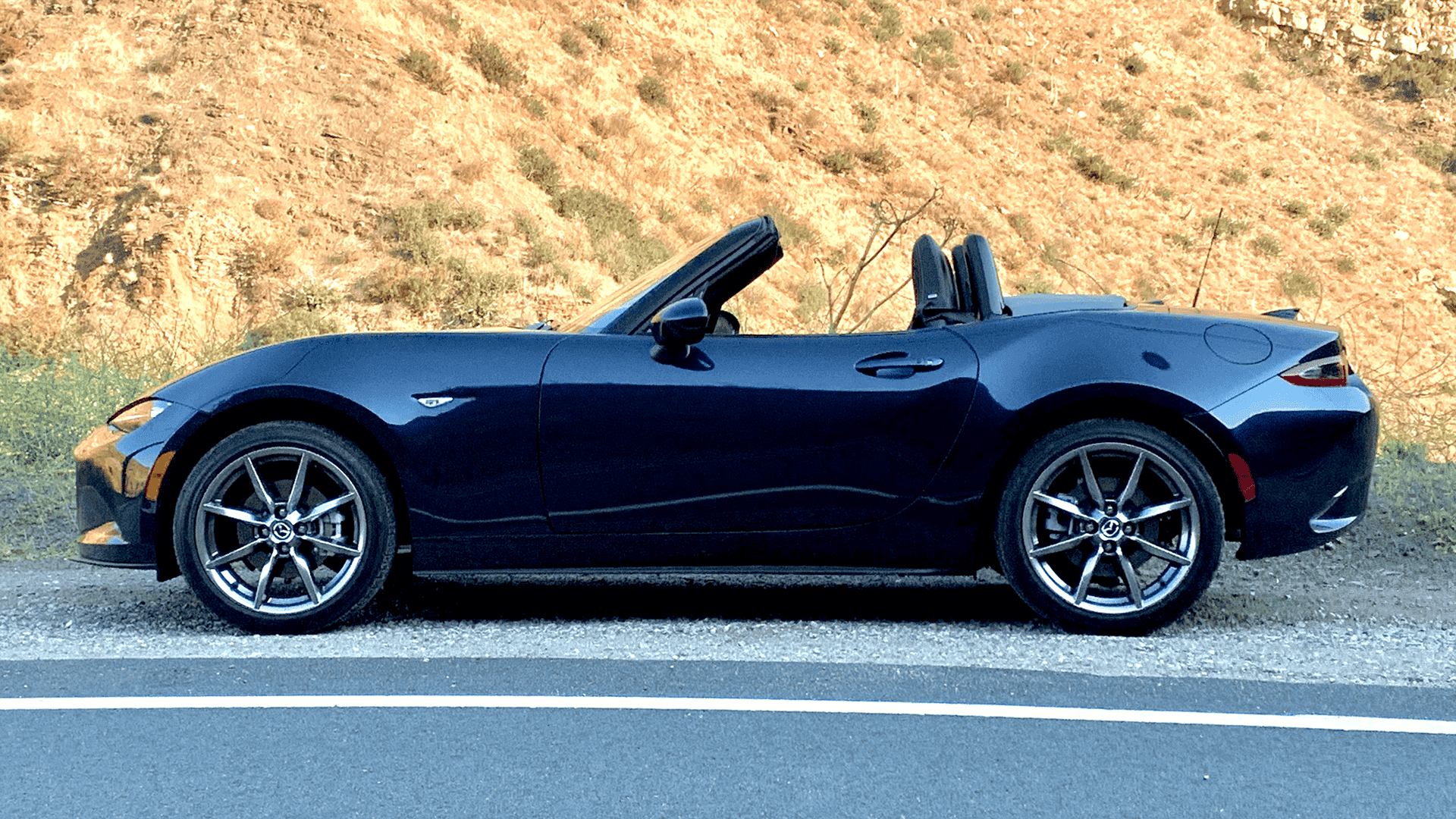 That the MX-5 has retained these fundamentals over four generations, or that Mazda still supports the model at all, is buoying. After all, affordable, purpose-built roadsters sell by the cocktail-forkful now; Mazda moves just a fraction of the MX-5s it did at its peak in the 1990s, when between 20,000 and 30,000 rolled off U.S. dealers’ lots. Fiat recently discontinued the 124 Spider, a joint project with Mazda built from the Miata’s bones. It’s jarring when an automotive spirit animal like the Miata persists for so long, and even improves without regard to sales volumes, but we love to see it.

Get Thee to the Canyons

I’ve flown in from New York imagining empty roads and the earth reclaiming itself: dolphins taking over the Port of Long Beach, geese nesting in $500 kaftans in Venice, sea otters digging into crab louie at Musso and Frank. That kind of stuff turned out to be mostly bullshit, but either way, I was a year late to experience any sort of solitude on LA freeways in a car whose sole purpose is to be driven.

Heading up the coast, and to the east.

As was ever thus, a 5:30 am start buys a clean run from the west side up the Pacific Coast Highway and on to the best roads, which are deserted in the early hours, save for an occasional berry-delivery van. (Yes, a van that delivers berries to peoples’ houses. Thanks for being you, California.) Then a great drive, a breakfast burrito, and a cruise back to town before the workday starts. It’s a sizable chunk of the So-Cal motoring dream, available for the low price of not hitting the snooze button.

With the MX-5’s light weight and simplicity, there’s little to come between the kinesthetics of driving and what’s happening beyond the windshield, which by 6 am is the Malibu waterfront. Pushing onto higher ground, it takes a deep draught of throttle to get at the 2,400-pound roadster’s power. There’s a bit more torque at the middle of the rev range now, a welcome trait of its latest engine—a 2.0-liter DOHC four that headlined the Miata’s most recent improvements introduced in 2019.

That’s when Mazda added a tweaked-up 181-hp mill with larger-capacity air, fuel, and exhaust pathways, higher-pressure injection, and stouter internals with less rotational inertia. Although not a massive performance upgrade, the newest engine feels punchier and more responsive. Matching the MX-5’s chassis to its power delivery has always been one of Mazda engineers’ strictest tenets, and with extra power and revvy personality to match the current model’s higher adhesion limits, that formula is as dialed-in as ever. Plus, if there’s a more satisfying shifter to come out of an auto manufacturer, I’ve yet to try it. The tactility of the MX-5’s stick goes a long way to keep a driver in the moment while keeping the engine in its powerband. 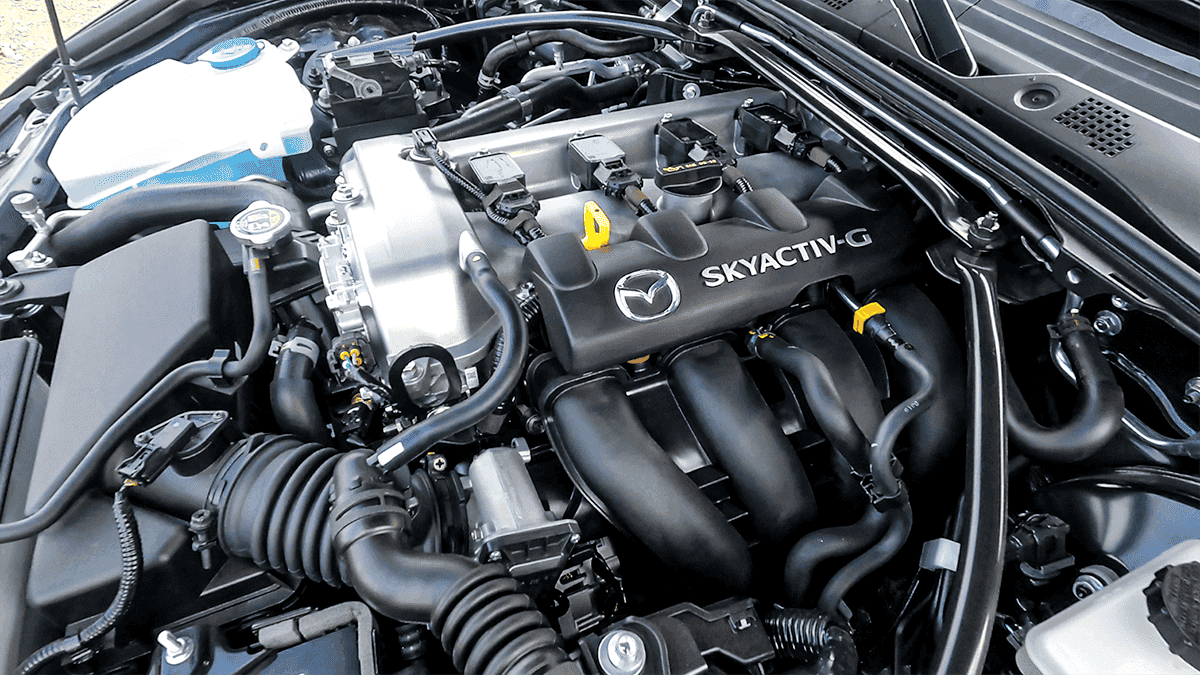 This is the top-of-the-range Grand Touring model, which as of 2020 comes specced similarly to the Club model, with a limited-slip differential, Bilstein dampers, front shock tower brace, sport-tuned suspension, and larger P205/45 R17 tires (the Sport gets P195/50 R16s), as well as the usable-with-the-top-down Bose nine-speaker audio system. Ordering the GT adds convenience features like rain-sensing wipers and auto-dimming driver’s side mirror, and wheels in an attractive, pewter-like Dark Silver finish, which match beautifully with the test car’s Deep Crystal Blue Mica paint.

When the latest, ND-generation MX-5 arrived in 2015 with news that engineers had reduced weight to below that of the previous NC generation, Miata purists were welling up. Most sports cars gain weight, size, and features over time, as they balloon into higher-spec and higher-margin versions of themselves. It’s quite a feat for MX-5 product planners to have kept as true to the original formula as they have, considering market pressures.

Materials science played a major role in check-marking that box. It’s obvious how much of the body is aluminum when I try to attach a magnetic camera mount to find the hood, trunk, and quarter panels non-attracting. Aluminum also pitches in to reduce weight in the engine, transmission, and some suspension bits.

Engineers also refined the MX-5’s handling dynamics, a less-complex process when there’s less weight to move around. Critics of the Miata’s signature pitch and roll, which contribute to the car’s ride comfort on imperfect roads, will appreciate the MX-5’s latest tune. Sharp initial steering response now blends into a less-abrupt roll to the sides. Heading up Yerba Buena Road, a narrow ribbon of perfectly cambered pavement lying just over the Ventura County line, it’s easy to get the MX-5’s delicate sway into an intoxicating rhythm while keeping a close eye out for cyclists. 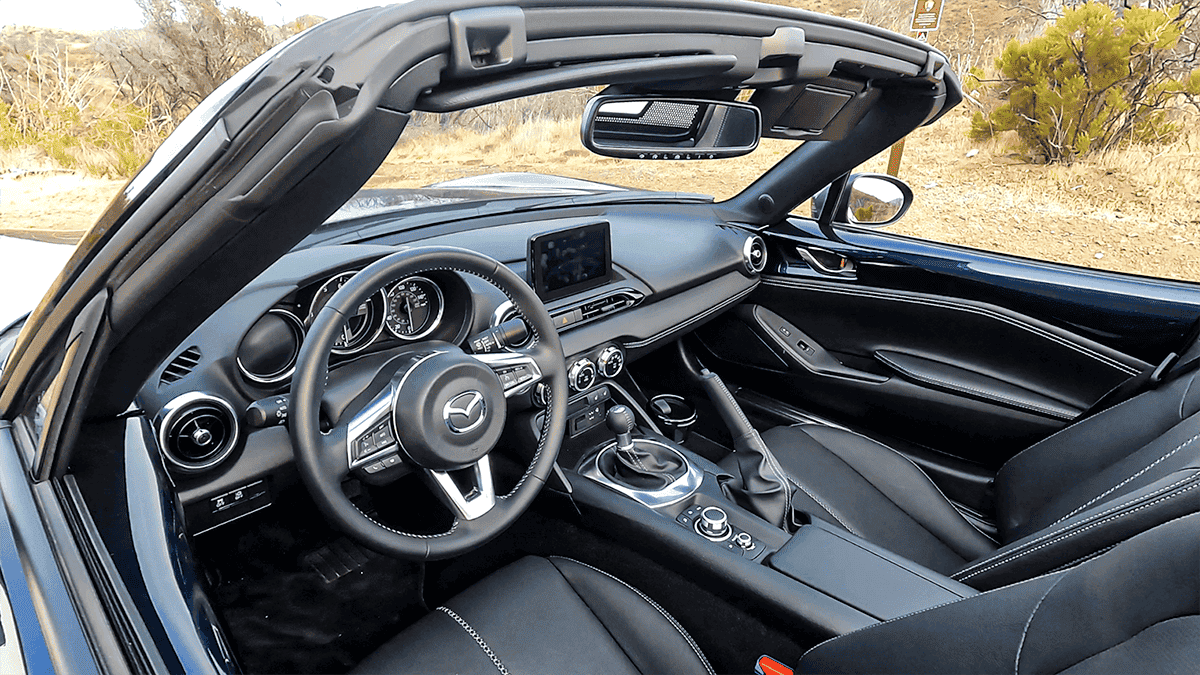 What Matters on the Inside

Inside, the MX-5 feels like a theme park for a lost analog world. If you’re used to a Times Square dash with a 12-inch TFT binnacle and a touchscreen Jumbotron at the center stack, the Miata’s gauges will read like a zen garden. Likewise, if you haven’t sat in a properly small sports car lately, the MX-5 can feel cramped, especially if you’re taller than six feet. The one-handed ease with which driver or passenger can drop the top goes a long way for those with claustrophobic tendencies, as do the current model’s tilt and telescoping steering column.

Wireless Apple CarPlay is the big news for this model year, a welcome nod to keeping up with the times. Still, the MX-5’s touchscreen wonked out and froze on occasion, seemingly caught between wanting to give me permission to use the system while driving and blocking me from my worst distraction impulses. The rotary dial (and my old buddy Siri) provided backup, and the wireless system worked as well, if slightly laggier than when the phone was on a tether. 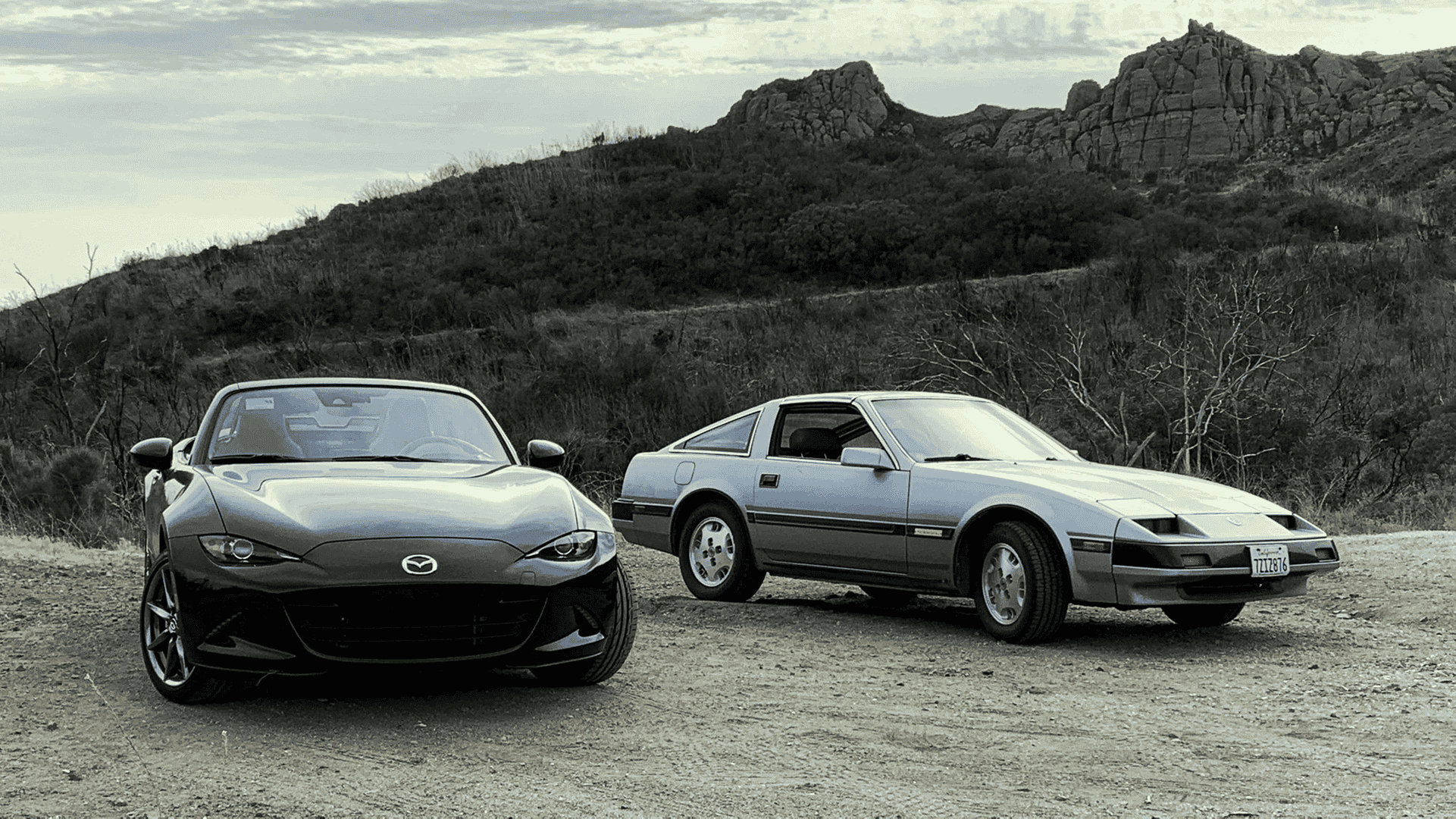 Heading back to town, a ride-quality quirk emerges; oscillations from some freeway surfaces cause a rhythmic choppiness as the compliant suspension dives forward and squats back rapidly over the short wheelbase. It’s not a deal-breaker, and the choice is clear between a bit of rock-and-roll to preserve the Miata’s simplicity and adding weight and complexity with an active suspension. How rare and exciting it is for the modern auto industry to tolerate a model whose engineering compromises tend toward doing one thing well rather than trying to do everything.

Of course, that means the Miata remains a specialty purchase for those who can afford a third car, or who will adjust their lifestyle to accommodate a minimalist, driver-focused roadster.

I went back to Malibu later in the day, this time with Car Bibles editor-in-chief Andrew Collins and his 1984 Nissan 300ZX. An MX-5 on a canyon road above Malibu with friends at sunset is an adrenalizing pleasure. The Miata’s neutral dynamics, light weight, and reasonable power still help guide a driver to become more competent behind the wheel. MX-5s will always hold a special place as an affordable entry sports car and a moldable platform for learning both the joys of racecraft and how to get the most from a day out on some great roads. 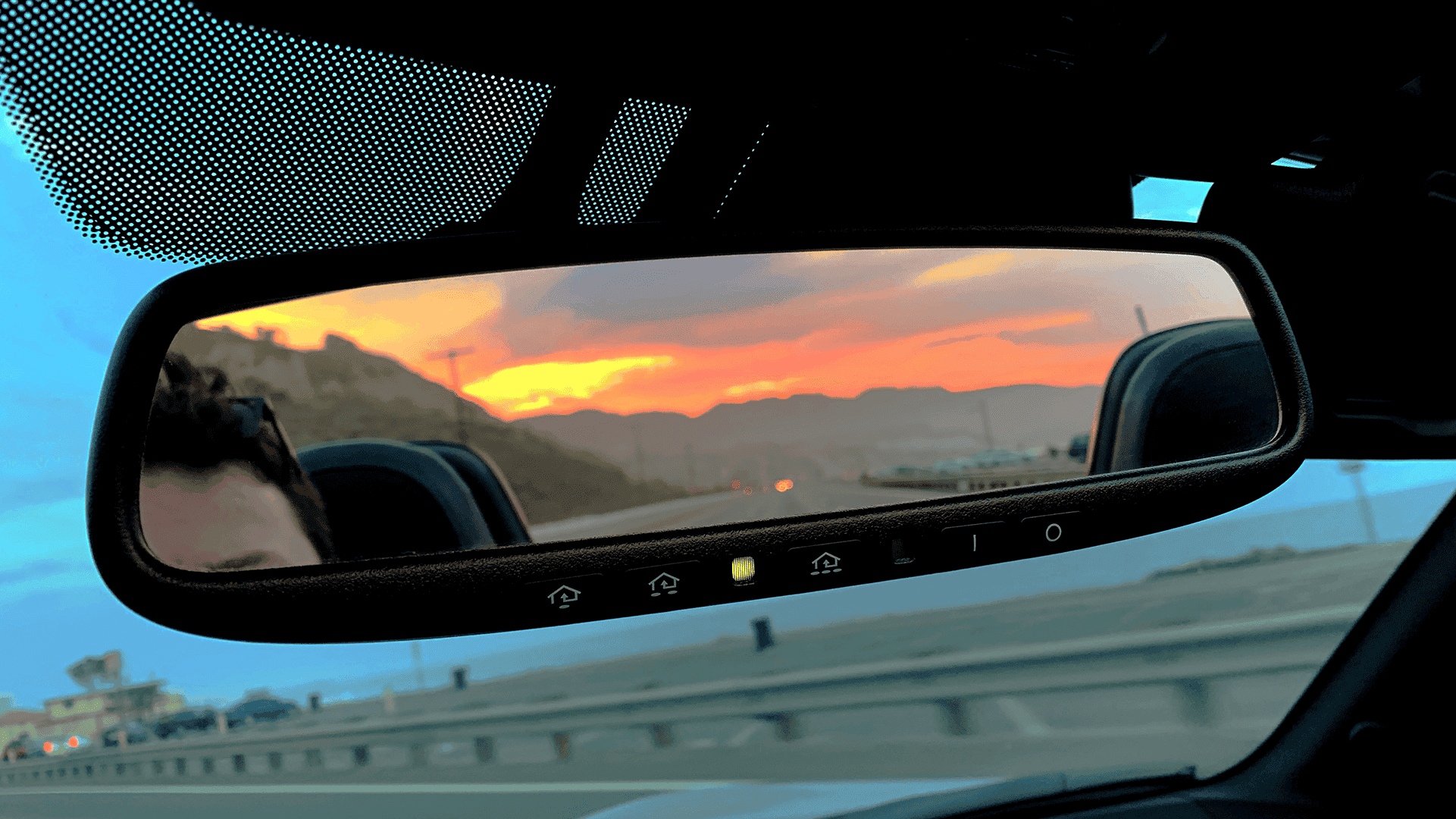 Four generations and 32 years in, it’s hard to believe this is the best Miata ever built, but it is.