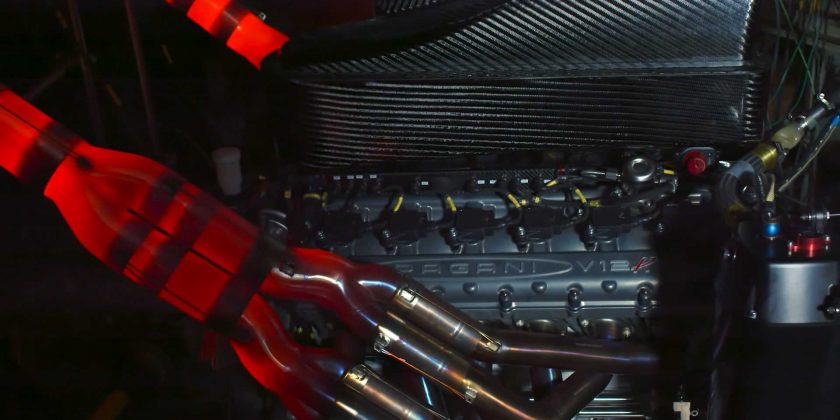 One-percenters with an appetite for track-only V12 machines are spoiled for choice. There’s the Gordon Murray T.50s Nikki Lauda, Lamborghini Squadra Corse SCV12, Ferrari FXX-K Evo, and the Aston Martin Valkyrie AMR Pro. Pagani is now joining the fray with the Huayra R, powered by a naturally aspirated 6.0-liter developed in collaboration with HWA, the same AMG spin-off behind the Apollo IE’s V12.

Following the Huayra R’s reveal yesterday, Pagani has been nice enough to share with us a video of the twelve-cylinder engine playing its sweet sound. Developed from the ground up, the turbo-less V12 produces a massive 850 horsepower (625 kilowatts) at 8,250 rpm and 750 Newton-meters (553 pound-feet) of torque from 5,500 rpm. It has a redline of 9,000 rpm and makes an incredible noise getting there.

This is a race engine through and through, so it goes without saying it cannot meet increasingly stringent emissions regulations applicable to road cars. Pagani says the 6.0-liter mill is durable enough for 6,200 miles (nearly 10,000 kilometers) at full throttle before the valves and valve springs have to be replaced. Despite its size, the V12 tips the scales at only 436 pounds (198 kilograms), allowing the Huayra R to have a dry weight of just 1,050 kg (2,314 lbs) or roughly as much as a European supermini.

When developing the heart of its new track-only hypercar, Horacio Pagani set out a task: “The new engine had to have the charm, romance, sound, and simplicity of the F1 engines of the 1980s, while incorporating state-of-the-art technology available today.” It does sound absolutely glorious and will likely go down in history as one of the last naturally aspirated V12s before electrification takes over.

Only 30 fortunate customers will be able to enjoy this sound on a track after paying an eye-watering $3.1 million. Mind you, it’s actually $400,000 “cheaper” than the Huayra BC Roadster. Being a race car without a dedicated race series, Pagani had the freedom to throw out the rulebook (and turbos) to unleash the full potential of what is a worthy Zonda R successor.