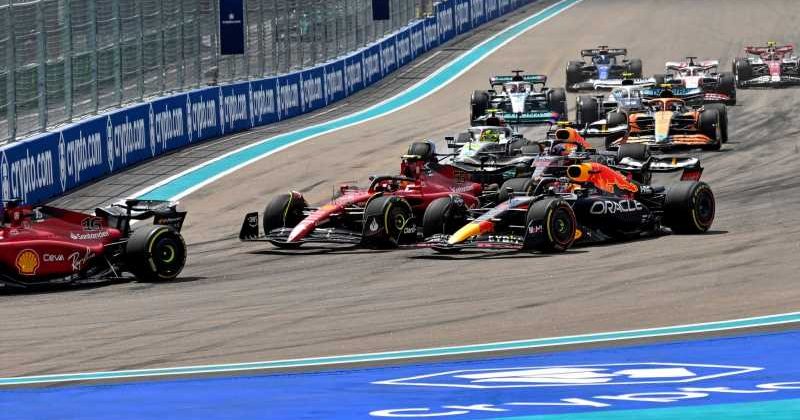 Carlos Sainz had “just one thing to do” at the Miami Grand Prix, protect Charles Leclerc, and he failed to do that almost immediately.

Leclerc and Sainz lined up on the front row of the Miami Grand Prix grid, the Ferraris out-qualifying the Red Bulls with Max Verstappen starting third.

While the Monégasque got away well, Sainz did not and Verstappen drew alongside him to go wheel-to-wheel through the first corner before passing with a forceful move in to the second corner sweep.

It was not the start that Ferrari had hoped for as Verstappen then set about closing the gap to Leclerc.

“Carlos had just one thing to do in Miami,” Allievi said to Formula Passion. “Blocking the way of Verstappen at the start and protecting Leclerc.

“He was not able to do that, he was overtaken by Max at Turn 2 and his race was over at that point.”

Sainz’s inability to defend against Verstappen meant Leclerc didn’t have his team-mate to protect him and the Red Bull driver quickly reeled him in.

He made his move for the lead on lap 9, passing Leclerc down the inside at Turn 1, setting up his victory.

Allievi continued: “Leclerc neither was able to deal with Verstappen’s comeback though, he lost the lead after eight laps.

“Ferrari leaves Florida with a bitter defeat for Leclerc, the fans, John and Lapo Elkann and the whole Prancing Horse.”

But it is not all doom and gloom for the championship leaders.

Ferrari still hold down P1 in both championships, Leclerc ahead of Verstappen in the Drivers’ standings and Ferrari six points ahead of Red Bull in the Constructors’.

And, unlike Red Bull, Ferrari have yet to release their first big round of upgrades with that coming at the Spanish Grand Prix.

“It does not change a lot,” Allievi added, “we will see Ferrari back on top if the upgrades they promised to bring in Spain will work.”