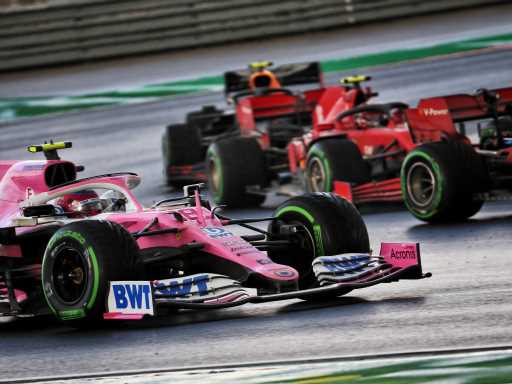 Lance Stroll started the Turkish Grand Prix from pole, but after dropping off later in the race he ended up down in P9.

It was a true upset during qualifying when Lance Stroll put his Racing Point on pole for the Turkish Grand Prix, the first pole of his career.

And the start of the race went very much to plan as Stroll retained his lead and built a sizeable gap over team-mate Sergio Perez.

But as the track dried out that pace advantage started to vanish and Racing Point swapped the Canadian onto intermediate tyres.

And that’s where it all unraveled for Stroll who just couldn’t fined any performance from the green-stripped tyres, finishing all the way down in P9 after making a second stop and encountering the same issues.

“I don’t know what happened, I don’t understand,” he told reporters at Istanbul Park after the race.

“We had so much graining on the first set of intermediates. We decided to pit, we were losing seconds a lap.

“I just don’t know where that graining came from, it just happened instantly. It grained again, massive graining, and no pace.

“We’ll have to look into it, it was pretty terrible today.

“It’s just frustrating that you’re in the lead by 10 seconds, and then all of a sudden you finish ninth.

“I don’t understand how that happens. I mean I do, it’s graining, but we just need to look into why it hit me so much harder than the other car. I’m not so sure why.”

The other car, driven by Sergio Perez, went on to the finish the race in P2 after making his set of intermediates last until the end of the race after pitting on Lap 11.

Days like these, whoever you support, are ones you never forget 👊#TurkishGP #F1 pic.twitter.com/2R9zRjUqhu

“He was holding it together so beautifully having started on pole position, a great start for Lance Stroll after Max Verstappen had a bad start.

“Looked totally comfortable in the first stint, was just happy on the tyres he was on, they were talking about slicks but it wasn’t the right thing to do.

“But then they got some spooks, they saw the likes of Leclerc trying new inters and that was a good idea, they thought, but then when he pitted for new inters, Lance Stroll, that was the end of his race.

“The tyres grained up after that and it was a real letdown and he was passed by Max Verstappen and ended up dropping down to P9 with no pace on the new intermediates.

“Less pace on new intermediates on a drying track than he had on proper full wets on a massively wet track, so really odd.

“Lance Stroll rightly should feel really disappointed and frustrated, he did all the hard work in qualifying and it just didn’t come together for him.

“But I suppose it will be a learning experience for him. If Stroll hadn’t have stopped and was happy to look after his tyres as it seemed he was, he was cooling them on the right side of the grid, it seems Lance probably would have finished third or fourth.

“Doing the same strategy on the worn intermediates running them from an early stop as soon as he put them on, for 45 or so laps as Perez did, Lance surely would have finished third or fourth, so really unfortunate.”