Mumbai-based racer Jehan Daruvala secured a podium finish in the first race of the seventh round of the FIA Formula 3 Championship in Monza. The 21-year-old had a disappointing qualifying session that saw the driver start in 10th place on the grid. However, an impressive run in the feature race led to Daruvala bagging the second place on the podium in a hard-fought finish. Prema Racing’s Robert Shwartzman won the race, inching closer to the championship title. Jehan continues to hold on to the second place in the driver standings.

The race started with the Prema Racing drivers outside the top spots on the grid after a bizarre qualifying session. 17 racers including the three Prema cars received penalties after numerous cars were to be moving slowly on the racing line. Race control found the situation too dangerous and stopped the session prematurely, which denied Jehan his second attempt at putting a lap time during qualifying. The racer had set the fastest time in Sector 1 and seemed certain to take the provisional pole for the first race. He qualified fourth eventually, but a 10 place penalty saw him starting 10th in the feature race. 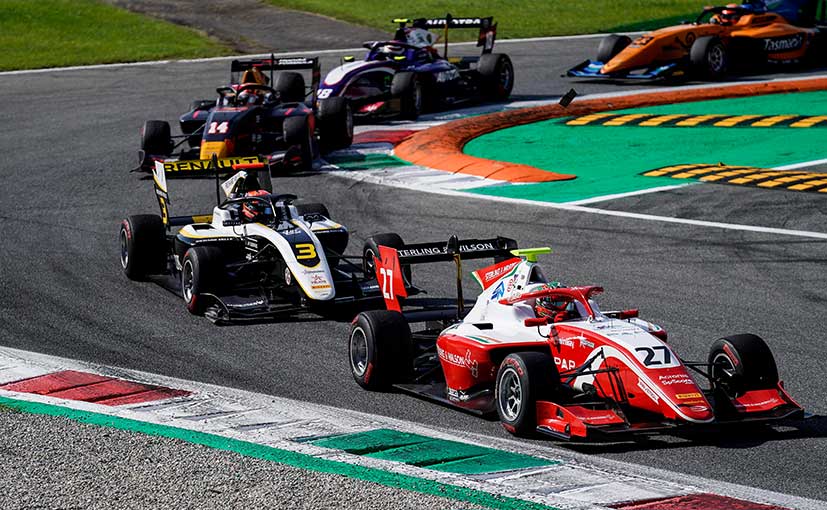 The race started with drivers Lirim Zendeli, Christian Lundgaard on the front row, followed by Richard Verschoor. Jehan had a strong start and used it to his advantage passing Brazilian racer Piquet for P9. A tangle between two cars further promoted him to P7, which was followed by passing British driver Max Fewtrell for P6. Race leaders Rundguard, and Zendeli fell down the order and Jehan was quick to overtake them as well to move into P4. It was then that the safety car deployed, which is when it was found out that Jehan’s Prema car had an issue with the Drag Reduction System (DRS). The issue cost about 20 kmph at the top speed, which is extremely essential on a track like Monza with the long straights. With the DRS issue not linked to the team, there was little that could be done and the racer had to drive with the same.

Despite the handicap, Jehan put up a tough fight and managed to overtake P3 from Richard Verschoor outside of the Dutchman around the first corner. He held on to P3 for the remainder of the but pushing further was difficult due to the D ₹ The closing stages saw another crash, which led to the race finishing behind the safety car. Shwartzman picked up his second win of the year, while Marcus Armstrong finished second. But a penalty pushed the driver down the order, promoting Jehan to P2.

Speaking after the race, Jehan said, “The race was a lot of fun, starting P10 and finishing P2 with such a good result for the team. It was very frustrating for me, not having DRS so I couldn’t really battle for the lead, and I really wanted to, I know we had the pace. Second is good but I’m a little upset for not having the opportunity to fight for the win.”

The second race of the weekend is set to take place on Sunday and will see the driver start seventh, due to the reverse grid order. The podium finish from Race 1 is also his seventh this season.

This Is Probably The New Ford Mustang Mach 1

The Maserati MC20 Will Be A Mid-Engined Flagship Sports Car