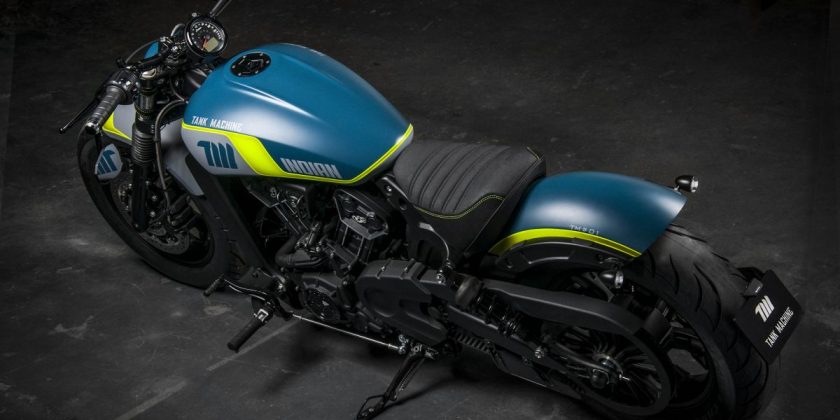 Complementing the fit out of the Neon, Supertrapp exhausts, a name legendary in US flat track racing, are fitted, together with wide profile Avon tyres and fork gaiters for the retro look. The rest of the Scout Bobber Sixty is blacked out, including wheels painted matte black. Builders Tank Machine was founded by designer Clement Molina, and the Scout Bobber Sixty Neon takes inspiration from the American NASCAR racing cars. “I really wanted to imagine some intense colour and work on a new line that would redraw the Indian Scout’s tank. It is a bold choice because I decided to integrate Fluro colours to achieve this,” said Molina.

Commissioned by Indian Étoile only three Neon limited editions will be built by Tank Machine and sold, with the number of bikes the result of Molina unable to decide which scheme looked best. “While selecting the colour mixes to present to Indian Étoile, I immediately hooked on three schemes but found it impossible to make a choice of just one. So, Sebastien from Indian Étoile agreed to create all three bikes,” Molina said.