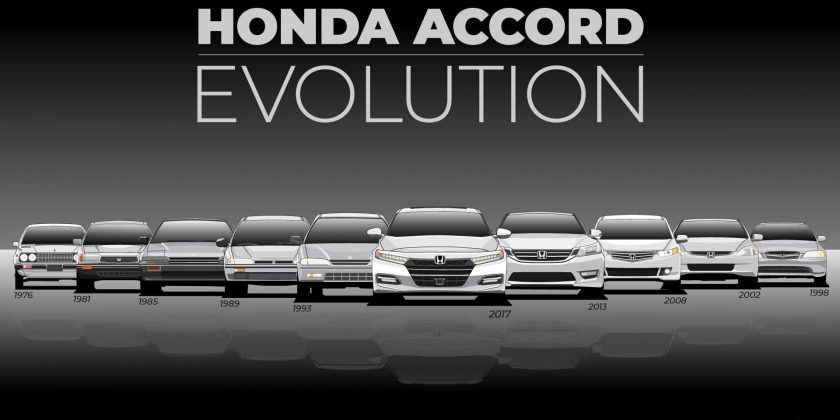 About two years ago, a nifty set of renderings refreshed our memory about the Honda Civic’s timeline by revisiting all ten generations to show the remarkable evolution of the compact car. Fast forward to 2020, the same folks at Budget Direct Car Insurance have sent us a new batch depicting the Civic’s bigger brother – the Accord.

Much like the Civic, the larger Accord has also spawned a total of ten generations, with the original launched back in 1976. It initially came out as a three-door hatchback before the four-door sedan was introduced in 1979. Power came from a 1.6-liter with a respectable 68-hp output sent to the wheels via a five-speed manual. The sedan arrived with a beefier 1.8-liter and was also equipped with power steering.

The first Japanese car assembled in the United States, the second-generation Accord was larger than its predecessor and had a substantially different look with boxy styling. It gained an optional four-speed automatic gearbox in 1983 and got its engine bumped in displacement from 1751cc to 1830cc to unlock 86 hp. More oomph was added in 1985 with the arrival of the Accord SEi and its fuel-injected engine pumping out 101 hp.

Once again, the Accord received an increased footprint for its third iteration, which came along with a third body style in the form of a sleek coupe. It was mechanically superior to its predecessor, featuring a Honda-first double-wishbone suspension at both axles as well as a more aerodynamically friendly body. Honda increased the engine’s size furthermore, to a 2.0-liter unit with 98 hp on tap when carbureted or an optional 110 hp with fuel injection. Oh, did we mention it had pop-out headlights?

With the risk of sounding like a broken record, the fourth-gen Accord was enlarged once more, fully qualifying for the midsize sedan status. Honda boosted the car’s practicality with the addition of a wagon that replaced the hatchback. A newly developed 2.2-liter engine was rated at a healthy 130 hp for the flagship EX model. There was even a sport mode for the four-speed automatic transmission, allowing the driver to choose gears manually. Sadly, it lost the nifty pop-out headlights.

The fifth-gen Accord saw the addition of VTEC for the 2.2-liter engine and the sedan’s first V6, a 2.7-liter unit making 170 hp and 165 lb-ft (224 Nm). The versions equipped with the bigger engine had some design tweaks at the front to distinguish them from the four-pot models. Honda stretched the wheelbase for extra rear legroom and proposed a sportier design.

No more wagon body style with the sixth-gen model, with only the coupe and sedan surviving. The two-door model was developed in North America and had a slightly shorter wheelbase than its four-door counterpart. Front airbags came as standard, with side airbags available at an additional cost. The base engine was a 2.3-liter with 135 hp, while an optional 3.0-liter V6 had 200 hp.

For its seventh iteration, the Accord got more powerful engines across the range. Even the base four-cylinder unit now made 160 hp, while the 3.0-liter VTEC V6 pumped out 240 hp. Both got a little bit more power later in the life cycle when an electrified V6 was added with a combined output of 253 hp. The coupe allowed customers to order the V6 engine with a manual gearbox for the first time.

Creating a greater visual differentiation between the sedan and coupe, Honda increased the Accord’s size yet again for the eighth generation. The V6 engine – now making 268 hp – was once again offered with a three-pedal setup. It was bumped to the fullsize car class by EPA, and spawned a hunchbacked Crosstour fastback for the 2010 model year for added practicality. The oddly shaped version was two inches wider than the sedan and added about 300 pounds (136 kilograms) of weight.

Not necessarily a fully fledged next-generation car, the Accord Mk9 was more of a thorough refresh of its predecessor. The sedan gained a Sport variant with a standard six-speed manual and a little bit more power than the regular four-cylinder models, along with dual exhaust tips as well as bespoke wheels. Honda went back and forth with the hybrid version, which managed to get an EPA rating of 48 mpg thanks to its electrified four-cylinder engine.

As for the current-generation Accord, the coupe has gone the way of the dodo together with the V6. The base 1.5-liter turbo engine is good for 192 hp while the larger 2.0-liter unit develops 252 hp, with a hybrid version also available with 212 hp. The electrified model does 48 mpg in the combined cycle. Even though it’s larger than the model it replaced, the tenth-generation model has shaved off 110 to 176 pounds (50 to 80 kilograms) depending on trim by making greater use of aluminum and ultra-high-strength steel.