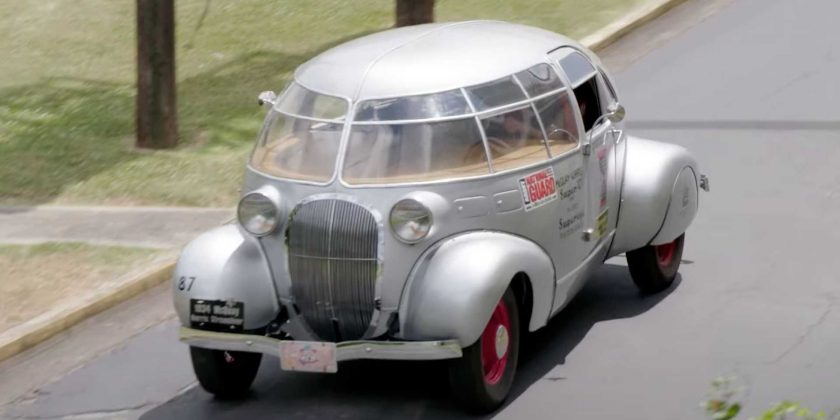 The 1934 McQuay-Norris Streamliner is a pretty unique car, but that’s not only because of its rather peculiar design. With only six units built from 1933 to 1934, you’d be hard-pressed to find something like it on the road – much more so with the fact that this is the only one currently in existence.

Jeff Lane owns this Streamliner. The few units were built as promotional vehicles for the McQuay-Norris Company of St. Louis, Missouri. The company manufactured replacement pistons, rings, bearings, and other parts used to rebuild engines.

The body of this unique classic car was by the Hill Auto Body Metal Company of Cincinnati, Ohio. It was made from steel and aluminum over a wood framework, while the curved windshield was made from plexiglass. It sits atop a Ford chassis.

As the promotional vehicles were also used as test cars, there are several gauges on the dashboard that are used to monitor various engine components – primarily to show customers why McQuay-Norris Company’s products are better than others. But those aren’t the odd thing about the cabin – the driver sits far back from the front, almost near the middle of the vehicle. The two bucket seats have a compartment for luggage at the back.

As the vehicle was built atop a Ford chassis, it’s also powered by a Ford engine – specifically a 3.6-liter Ford Flathead V8 that makes 85 horsepower (63 kilowatts). This power is sent to the rear wheels via a 3-speed manual transmission. The top speed is rated at 80 miles per hour (128 kilometers per hour).

The only working 1934 McQuay-Norris Streamliner can be found at the Lane Motor Museum. Established by Jeff Lane himself in 2002 and opened to the public in 2003, the museum houses cars that he collected over the years. Lane started collecting cars in his early 20s and up until now, he still continues to search out vehicles that are technically significant or uniquely different to be added to the museum.