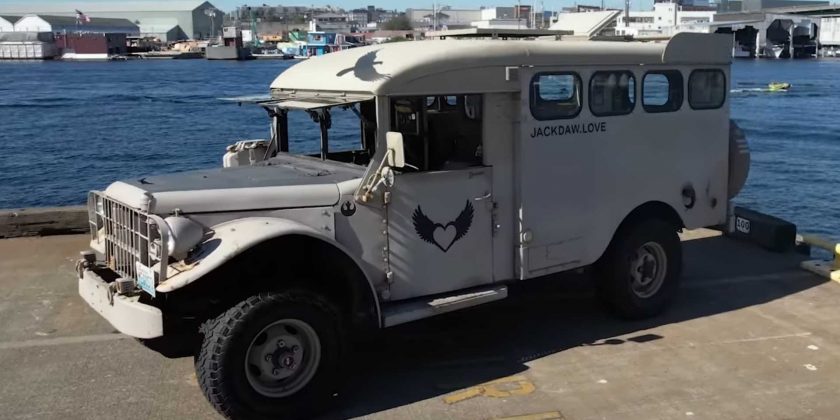 This 1954 Dodge M152 once served as a command truck for the Canadian Armed Forces. Rich found it derelict in Ontario, paying $6,000 for the truck and another $3,000 to transport it home, turning it into his new camper.

It took Rich about a year and a half to get the truck running and another year before he could live in it, but he’s been living in it full-time for the last four years. The Dodge doesn’t have a lot of bells and whistles, but Rich designed it with simplicity in mind. That means the truck doesn’t have a toilet. However, it does have an outdoor handheld shower/faucet.

Inside, there’s a large, comfortable bed with storage underneath, but the living space is small, measuring just 48 square feet. Between the bed and cab are a small bench and a countertop with drawers. These serve as the pantry and storage, with a small kettle and other gear for cooking indoors. The camper also has the smallest Dometic fridge.

Rich didn’t install any hanging cabinets because of the command vehicle’s copious amount of windows, giving the military men inside a 360-degree view of their surroundings. Instead, he discovered he could use magnets to hang things like a towel rack from the truck’s ceiling. He even found drinking glasses with magnets in the bottom that hang out of the way. The vertical walls and windows make it feel bigger than it is.

This lack of storage means Rich keeps his clothes underneath his bed, keeping his possessions minimal. A fuller kitchen is available through the truck’s back hatch, where fold-down tables serve as a prep station. There’s storage for his cooking utensils, spices, and more.

Powering the 9,000-pound (4,082-kilogram) rig is a Chevrolet small-block carbureted engine. Rich wanted to keep it simple so it’d be easy to repair out on the road. He had a fabricator make custom wheels to run modern tires, improving the ride quality a bit. He’s invested $30,000 into it, and it’s great to see the old Dodge still chugging along.