Without a doubt, the Pebble Beach Concours d’Elegance is the most prestigious event of its kind in North America, if not the world. And Pebble Beach doesn’t pretend to be inclusive. You have to be invited to show your car, so only the most beautiful and rarest automobiles are invited to appear on the famed 18th fairway of the Pebble Beach Golf Links.

Among the Duesenbergs, Bentleys, Delahayes, Ferraris, and other prewar classics and exotics that were overlooking the Carmel Bay back on August 15, 2015, was a row of Mustangs. Shelby Mustangs to be exact, but still Mustangs hobnobbing among the elite in automotive history.

The Concours committee invited eight first-generation Shelby Mustangs to celebrate the 50th anniversary of the Shelby G.T. 350, so Neal Hasheider and his 1966 G.T. 350 were in a very exclusive club. He did not come away with an award, but by no means was his Shelby a dog. At these events where the vehicles are all so pristine, it’s the backstory that places them on the presentation ramp. For example, the class winner in the Shelby category was John Atzbach’s stunning, race-trimmed ’65 G.T. 350, the first competition G.T. 350 built. So you get the picture. Prominence is everything.

The Santa Clara, California, resident has owned this Candyapple Red Shelby since December 1989. The car was originally sold at Hayward Ford in December of 1966, and it went through six owners—all of whom kept it in the San Francisco Bay Area—before Neal grabbed it. It had been raced hard, with big sway bars and wide flares being added. It was even painted white with blue stripes at one point. Neal did a bit of autocrossing with it as well before he decided a restoration was in order. Also, an overheating issue helped push that decision along. “When you take the motor out, other things happen,” Neal says. 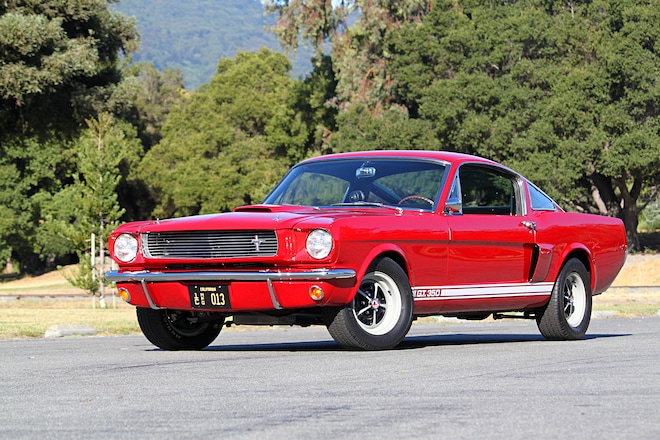 But Neal had no idea it would take this long. The restoration began in 1997, but came to a halt when Neal had to work for a time in Washington, D.C. In 2002, while working at the Winter Olympics in Park City, Utah, Neal met Armond D’Agostini of D’Agostini Restorations in Lehi, Utah. They talked at length about the car and what it needed. Neal felt very comfortable with Armond handling the paint and bodywork portion of the restoration, so the Shelby was put on Armond’s schedule and was shipped to Utah in 2004.

The first order of business was replacing the floorpans, as they had been cut and beaten up pretty well, so a donor ’65 hardtop helped with that process and in a few other places. Next was locating a set of N.O.S. quarter-panels to replace the hideous fender flares, and the inner quarter wheelhouses also needed work. The Shelby’s hood was original, but in bad shape—the original metal frame was bent, so Armond de-skinned the fiberglass and re-glassed it to a new frame. It was a lot of work but came out flawless.

When it came time to spray the Candyapple Red paint, Neal had a long debate with Armond about the Le Mans stripes. Originally Neal’s Shelby did not have them, but Neal was thinking it needed them. He went back and forth for about a month as to what he wanted. “I kept changing my mind,” Neal says. Finally he decided to go sans Le Mans stripes since nearly all the tribute G.T. 350s have them. “I thought I could always put them on later,” Neal says. “But now that will probably never happen. It just looks too good in red. And Armond hit it dead-on with the color shade.” It also kept its theme of being a base-model Shelby with radio delete and painted Magnum 500s.

By 2007, Armond was finished with the body and it was shipped back to Neal’s home. Neal had planned to retire in 2007 and work on the Shelby, but the retirement plans got put on hold until 2010. “I gave the paint a long time to cure,” he says with a laugh. But once the renovation commenced, Neal worked in earnest to get it completed. 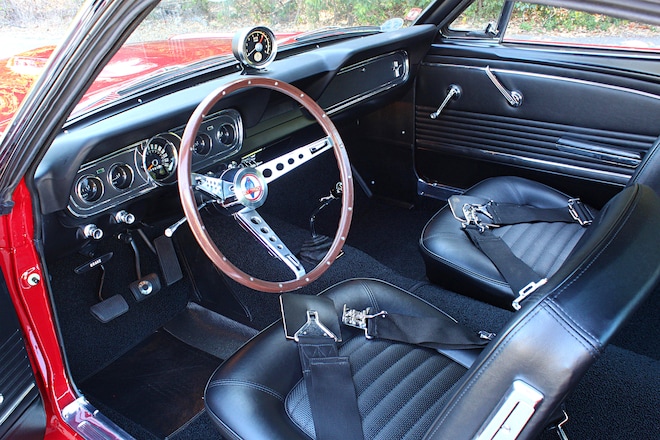 Neal did all the assembly work himself, but he did have the engine rebuilt by Dwayne Price in Ashland, Oregon. He said one of the toughest pieces to find in the restoration was a breather hose from the oil filler cap to the bottom of the air cleaner. “It’s a formed hose with three ribs,” Neal says. “It’s incredibly hard to find.” His friend Craig Conley just so happened to find it at a swap meet in San Diego tossed in a box of stuff. So did Craig stick him with a big price knowing Neal was desperate for it? Nope. “He just gave it to me,” Neal says.

One slight deviation that was not concours correct was using Koni shocks rather than the blue Gabriel adjustables. “The correct shocks are just too difficult to find and the reproductions are not adjustable,” Neal says. The one item that Neal is amazed is still original to the car is the windshield. He says, “All the glass is original, but considering it was autocrossed you would have thought the windshield would have been replaced at some point.”

Neal finally completed the restoration in November of 2013, giving him the winter to double-check everything and do any final adjustments needed before the show season. He did a few summer shows in 2014, but it wasn’t until 2015 that he entered a Mustang Club of America show; in March of 2015 he headed down to Tucson, Arizona, for the “Spirit of the Sun” national show hosted by the Old Pueblo Mustang Club. There, Neal’s Shelby slithered off the desert show field with a Gold award in the Concours Trailered class.

There have been other shows since 2015, but Neal knows there will be no topping that summer day in 2015 when his lil’ Shelby Mustang mingled with the finest automobiles in the world at the crown jewel of collector car events. It was the red snake in the grass.