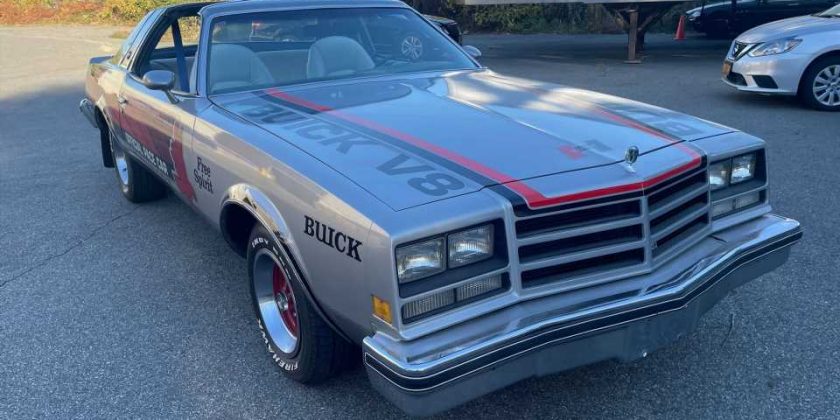 Throughout the Malaise Era, the Indianapolis 500 almost always managed to find interesting vehicles to use as pace cars: The Hurst/Olds Cutlass in 1974, C3 Corvette in ’78, Fox Mustang in ’79 and Pontiac Trans Am Turbo in 1980. But in 1976, Indy had a posher pace car—and at the upcoming Mecum auction, you’ll be able to pick up a replica. Say “Have a nice day!” to the 1976 Buick Century Pace Car Edition.

Let’s take a quick trip back to the 1970s, when Buick was well into its decades-long fight against its image as an old man’s car. No surprise that the brand settled upon racing as a great way to revitalize its image, because old fogeys don’t go racin’.

1976 was actually the second straight year the Buick Century paced Indy. The 1975 race employed a ’75 Century coupe with a massive 455-cid (7.5 liter) V-8 stuffed under the hood. Despite losing its emissions equipment to unleash its potential, the big Buick struggled to keep the necessary speeds, so for ’76 Buick tried something revolutionary: A turbocharged V-6.

Buick engineers briefed MotorTrend on the ’76 pace car, which adorned the cover of our June 1976 issue. Buick engineer Tom Wallace explained that the 455 in the ’75 car “was strong, but just didn’t have the high-speed acceleration the Speedway wants. It’s very important to bring the field up to speed in the proper sequence.” Per Wallace, the pace car “has to come out of Turn 3 at 90 mph, Turn 4 at 110 mph, and hit the pit entrance at 120 mph. Other than that, there aren’t any specific requirements.”

Buick just happened to have an engineering team experimenting with a turbocharged version of its 231-cid (3.8-liter) V-6, and when Indy invited Buick to return for a second year as the pace car purveyor, it was the turbo that Buick tapped. In March of ’76, six months into the development program, MotorTrend drove a prototype that was very close to the final version. It employed a Rayjay turbocharger mounted below the carburetor and delivering up to 22 psi of boost. The V-6’s internals were fortified and compression ratio dropped from 8.0:1 to 6.0:1. Power ratings were 306 hp and 370 lb-ft, pumped through a THM-400 3-speed automatic transmission.

The new pace car featured the ’76 Century’s facelifted styling, heralded by square headlights which had only recently won governmental approval. The smaller engine and substitution of aluminum for the pace car’s fenders and hood made the ’76 pace car 650 lbs lighter than the similarly-sized 1975 pace car, and the project’s goals were achieved: The turbocharged pace car accelerated from 90 to 110 in eight seconds, nearly twice as quickly as the ’75 car. “This year, we’ll have all the acceleration they could want,” Wallace told us.

Our 1976 report included a tantalizing subhead: “The bits and pieces Buick has developed for the 1976 Indy 500 pace car will probably be available for the street.” This turned out not to be the case, at least not right away. You’ll notice that while the real pace car’s hood shouted “BUICK V6”, the one for sale at Mecum says “BUICK V8”. This decal seems to be an owner add-on; contemporary photos of other Century pace cars show only the stripes on the hood. But it does ease you into the bad news: There is no turbo V-6 under this car’s hood, or any ’76 Century Pace Car—at least not as delivered from the factory.

Oh, it had the 3.8-liter V-6 under the hood as standard equipment—but without the turbocharger. Instead, it had a two-barrel carb and a full host of emissions equipment, producing a mere 105 malaise-appropriate horsepower. The 5.7-liter V-8 was optional—at this point, Buick was still using its home-grown 350, rather than Chevy’s engine—and it was offered with either two- or four-barrel carburetion, producing 145 and 165 hp respectively.

The car for sale at Mecum has the 350 four-barrel setup, so it should be able to get out of its own shadow. It also has all the other bits and pieces that made the Pace Car so cool, including bucket seats, blacked-out chrome trim, and Buick’s trademark jet-fighter-style shifter for the THM-350 automatic transmission.

Replicas were painted silver with a black-and-orange tape-stripe job, but while the real pace car’s orange stripes ran from bumper to bumper, the replica’s striping only extended as far forward as the orange-silhouetted hawk on the front door. Decals included “Buick” and “Free Spirit” lettering. Perhaps the most-1970s feature is the Hurst Hatch roof, a set of T-tops installed by—you guessed it—Hurst.

The car for sale at Mecum has 75,000 original miles and looks to be in decent shape, and the interior—blue with white seats—is an unusual option we’ve seen in other General Motors cars. The decal job doesn’t quite match the original photos we’ve seen; our guess is the car has been repainted and someone has done a bit of freelancing on the artwork, which is bound to affect the car’s value.

Incidentally, the turbocharged 3.8 did join the Buick lineup in 1978 as an option in the Regal. (The Regal name was formerly used to denote a top-of-the-line Century; when the downsized intermediates arrived for 1978, two-doors were called Regal and four-doors and wagons were called Century.) Output was 150 or 165 horsepower, depending on whether the engine was fitted with a two- or four-barrel carburetor.

Oddly enough, when a Regal paced Indy in 1981, it used a naturally-aspirated four-barrel 4.1-liter V-6, basically a bored-out version of the 3.8. Meanwhile, development of the turbo V-6 would continue. In 1984 the 3.8 engine adopted multi-port fuel injection and a novel distributor-less ignition system, and the engine as such were fitted to the Grand National and later GNX—legendary cars that are the reason the 1976 Century pace car has largely been forgotten. This auction represents an opportunity to own a nifty (if not entirely authentic) piece of 1970s kitsch—and a rolling reminder that even old men drove cool cars back in the 1970s.