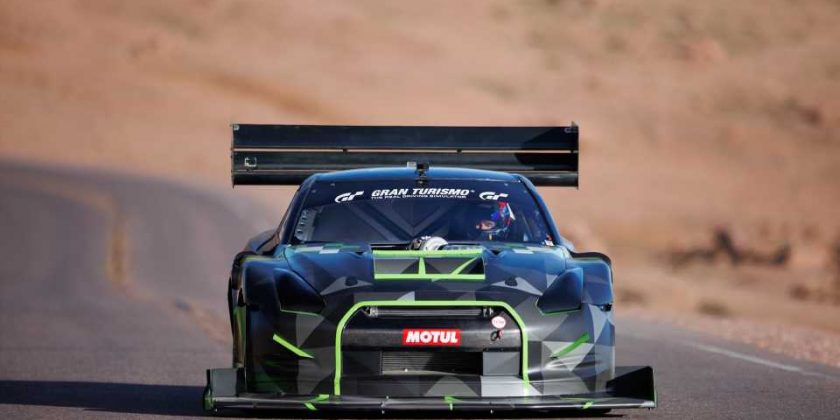 The life of a race car can be rough as it’s always in danger of going beyond its limits, just as Cole Powelson found out in his 2015 run up Pikes Peak in “Frank the Tank,” the 2010 Lyfe Motorsport Nissan GT-R. It was mostly destroyed and what parts that could be reused ended up on “Sydney,” the R35 GT-R Lyfe Motorsport built for the World Time Attack Challenge (WTAC) in 2015. Now, nearly seven years later, Frank is revived but with a drastically different powertrain. Not an RB30, not a LS V8, it’s not even powered by gasoline. That’s right, Frank’s new heart is a diesel from a Ford truck, and in a twist of fate, the goal is to take on the diesel record set by a Ford truck with a Cummins engine.

You could not think of a more drastic swap than you’re seeing right now. The GT-R is fitted with a 2004 Ford 6.0 liter turbo diesel V-8 Powerstroke and it took some cutting to make it work. The engine isn’t just something ripped out of the junkyard, though, as it was built by RiffRaff Diesel Performance in Eagle Point, OR. The factory block is fitted with a set of Mahle stock bore ceramic coated pistons with valve reliefs cut in. The valves are operated by a Stage 2 billet camshaft and it bumps the Anderson HS lifters using Smith Brothers pushrods. The heads are contained by a set of ARP 625 Plus head studs and the valvetrain is covered by a RiffRaff Diesel billet valve cover. Fueling this setup is a set of 250cc 100 percent injectors and forcing air into the ODawg 6.4L inverted intake manifold is a compound turbocharger setup with a KC Turbo Jetfire Stage 1 as the primary and a BorgWarner 80mm turbo working as the secondary. The intake system is so massive that its tubing is mounted inside the cabin, directly in front of Powelson as he charges up the mountain.

Keeping the charger air cool up Pikes Peak requires some additional work than what just the intercooler can provide, so a water sprayer is added in front of it to make up for the lack of air as you climb in altitude. The Powerstroke engine is oiled thanks to a Terminator T500 High-Pressure Oil Pump (HPOP) feeding Motul’s new Tekma Ultima Plus 10w40 diesel oil. This is sent through a custom dry sump system that required the use of a KDD dry sump front cover and custom-made oil pan. The engine system is kept cool by using custom, rear-mounted radiators.

While Frank uses the stock R35 GT-R rear subframe, the transmission is pulled from Ford and located behind the engine, requiring cutting of the floorboard and torque tube tunnel. This allowed the John Wood-build Ford 4R100 four-speed automatic transmission to fit after its torque converter was attached to the billet flex plate. Even with all of the fully carbon fiber body panels, Frank 6.0 is not a light car. A stock Nissan GT-R tips the scales at 3,819 lbs at its lightest. Sydney, the WTAC R35 GT-R, weighed in at around 3,700 lbs. With two-inch steel tubing for the roll cage, Frank 6.0 weighs in north of 4,000 lbs. Fortunately, Frank is producing in the neighborhood of 950-960 hp and well over 1,000 ft-lbs of torque.

While it may be a heavy car for a Nissan GT-R, it’s relatively lightweight for any of the diesel-powered entries. Some issues were found during practice, but were fixed in time to make the race. Unfortunately, it wasn’t enough. While Frank 6.0 and Powelson were able to trip the timing beams for section one, turning in a time of 2:15.061, the ninth fastest though the section in the Unlimited category, but needed to be around five seconds faster to come close to matching the record by Birdsall and Old Smokey F1. While this may feel like a failure, it’s really a triumph considering the amount of time spent on building Frank 6.0, swapping in such an unusual mix of engine, drivetrain, and chassis, and dealing with the engine issues they had during qualifying. As they say, there’s always next year and we’re sure to see Powelson and Frank 6.0 come back in 2023 in better shape and faster than ever.