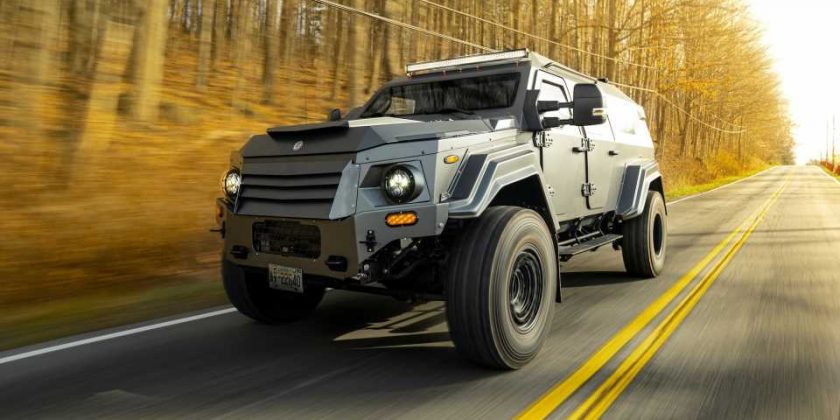 Wanna make a statement and kick off 2022 in style? Tell your friends and family you’re in the market for a used Ford Super Duty truck, and then roll up in this 2017 Terradyne Gurkha LAPV (Light Armored Patrol Vehicle), based on a 6.7-liter V-8 Power Stroke Ford F-550 Super Duty in reportedly excellent condition.

Arm yourself (pun intended) with the excuses that used trucks are ridiculously expensive—especially ones with low mileage like this one (under 16,000!)—and declare that this variant is clearly the safest choice. Boom. An armored truck could be in your driveway. Its presence is a little imposing, but assuredly everyone would adjust quickly to the rather rugged looks of this unique Super Duty’s armored body (B4 level rating) and the roof-mounted escape hatch.

This particular Matte Granite Grey LAPV from Terradyne Armored Vehicles was built as an SUV-style private security model with custom windows and lighter weight body panels, making for the perfect civilian armored truck. It obviously has a ton of mods, two of the more practical ones being the 80-gallon secondary fuel tank (in addition to the 40-gallon primary tank) and its array of exterior lighting.

The custom interior of the armored Terradyne Gurkha is rather luxurious, sporting black and red leather with diamond-quilted detailing and contrast stitching. The custom center console houses a bounty of custom and relocated backlit switches. The one we’d jab the most is the one that says Do Not Push. As for visibility, the truck retains a reverse camera and has reverse proximity sensors.

The Gurkha has Terradyne’s off-road package, because nothing beats an off-road elephant with a DGAF attitude. Upgrades include Fox shocks, a Warn winch, front differential lock, and an on-board air compressor. It has internal beadlock 20-inch wheels mounted on meaty 335/80R20 Michelins.

The 2017 Terradyne Gurkha LAPV is listed on Collecting Cars, a global 100-percent online exotic car auction platform that was founded in October 2018 in the United Kingdom, after which it quickly established teams in Europe, Australia, and the United States. In August 2021, it achieved its first seven-figure sale, a Porsche 918 Spyder Weissach Package for $1.4 million. In November it sold a McLaren P1 for $1.6 million, which the company claims as an online-only auction platform world record. The Gurkha won’t be setting any records in the world of exotics, but it should make for a pretty pricey 2017 Ford Super Duty.