You’re looking at the most powerful non-M 3 Series ever.

When BMW introduced the all-new 3 Series last month in Paris, it disclosed preliminary technical specification about the hotter M340i / M340i xDrive, but without showing the car in the City of Lights. Should you want to check out in the metal the hottest non-M version of the new 3er, you’ll have to head to the Los Angeles Auto Show at the end of the month.

Aside from announcing it will have the spicy 3er flavors in L.A., BMW has released a few fresh photos of the sports sedan scheduled to arrive in Europe next spring while the U.S. will have to wait until summer. Regardless if you go for the tail-happy version or the grippy all-paw model, you’ll be rewarded with a turbocharged 3.0-liter inline-six engine producing 382 horsepower and 369 pound-feet (500 Newton-meters) of torque. That makes it the most powerful non-M 3 Series ever built. 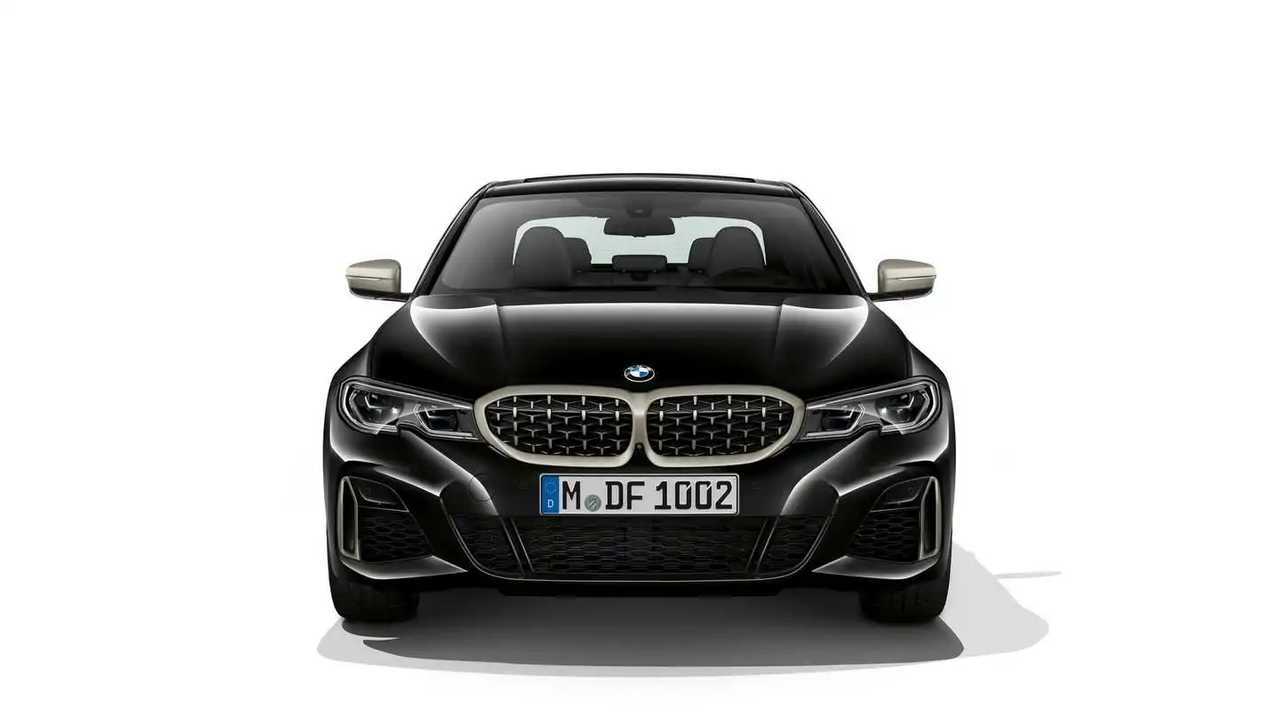 When it comes to performance, the xDrive-equipped M340i needs 4.4 seconds to complete the 0-62 mph (0-100 kph), so it’s half a second quicker than its predecessor. It’s possible also thanks to the eight-speed Sport Steptronic gearbox featuring launch control to provide the best acceleration possible. The new 3er is also lighter than the model it replaces (by up to 121 pounds / 55 kilograms) and that obviously pays dividends in terms of performance.

If you feel like life’s too short to wait for the fully fledged M3 and you’re also not willing to pay the premium, the M340i is shaping up to be a great driver’s car. With a near perfect 50:50 weight distribution, M Sport limited-slip differential, a low center of gravity, and a 25-percent stiffer body, the hottest 3 Series that’s not an M3 should deliver plenty of smiles behind the wheel.

Details about how much it’s going to cost have not been released, but BMW has told us it’ll likely put a price tag on the M340i and M340i xDrive on November 28 in Los Angeles. Meanwhile, check out the press release below to read all the juicy info.

Munich. The new BMW 3 Series Sedan is picking up more speed on its way to its market launch in the spring of 2019. The BMW M GmbH is now presenting an extremely dynamic model variant of the new sports sedan. The BMW M340i xDrive Sedan (combined fuel consumption: 7.5 l/100 km; combined CO2 emissions: 172 g/km*) is powered by a newly developed straight six-cylinder petrol engine with 275 kW/374 hp. Together, high engine performance, M-specific suspension technology and intelligent four-wheel drive provide for outstanding driving dynamics that are unparalleled in the midsize segment. The exceptional sporty character is underscored by model-specific design and equipment features. The Los Angeles Auto Show (30 November – 9 December 2018) will serve as the setting for the world premiere of the BMW M340i xDrive Sedan. The market launch will commence in the USA in July 2019, followed by Europe in July.

Straight six-cylinder engine with superior power development and characteristic sound.
The power plant developed for the BMW M340i xDrive Sedan raises the vehicle’s characteristics in areas of performance, response, revving power, running smoothness and efficiency, so typical of BMW straight six-cylinder engines, to a new level. The 3-litre engine features an aluminium crankcase and an aluminium cylinder head. The turbocharging system, which was constructed according to the TwinScroll principle, has also been redeveloped. The integration of the compact steel exhaust manifold and turbocharger effectuates rapid boost pressure development. A mass moment of inertia reduced by around 25 percent enhances turbine response and a wide opening, electrically controlled waste gate contributes towards better emission values. Fuel supply is performed by means of High Precision Injection technology, the injectors of which now operate at an injection pressure increased to up to 350 bar. The current version of M TwinPower Turbo technology is complemented by fully variable valve control VALVETRONIC and variable camshaft control Double VANOS.

The drive technology, which has been extensively redeveloped and numerous details of which have been completely renewed, provides the six-cylinder with an increase in output by 35 kW/48 hp to 275 kW/374 hp vs. the most powerful engine previously used for the BMW 3 Series, as well as an increase in maximum torque by 50 Nm to 500 Nm. As a result, the car has also clearly gained in sporting prowess. The BMW M340i xDrive Sedan completes the sprint from 0 to 100 km/h in 4.4 seconds – half a second faster than the top-of-the-range model of the previous generation of the BMW 3 Series Sedan.

Power development and speed increase are accompanied by the characteristic sound of the straight six-cylinder engine, which has gained additional presence thanks to the M Sport exhaust unit. Above all in the SPORT and SPORT+ modes, which can be activated via the Driving Experience Control switch, the valve-controlled exhaust system generates a particularly distinctive sound. The sound development that accompanies the engine’s dynamic power delivery is also intensively perceptible inside the BMW M340i xDrive Sedan. The dual-pipe M Sport exhaust system is fitted with two petrol particulate filters, enabling the BMW M340i xDrive Sedan to meet the requirements of the Euro 6d-TEMP emissions standard. Combined fuel consumption is 7.5 litres per 100 kilometre* and CO2emissions are172 grams per kilometre.*

Standard features: 8-speed Steptronic sports transmission and BMW xDrive with rear-wheel bias.
The BMW M340i xDrive Sedan comes as standard with the 8-speed Steptronic sports transmission of the latest generation, which is characterised, amongst other things, by an optimised hydraulic control system and exceptionally high shifting dynamics. Short ratios for the lower gears improve acceleration and the Launch Control function can be used for accelerating with maximum dynamics from a standstill. Shift paddles on the steering wheel facilitate manual gear selection at any time.

With fully variable power distribution between the front and rear axle, the intelligent four-wheel drive technology featured by the BMW M340i xDrive Sedan ensures maximum traction, agility and vehicle stability. The rear-wheel bias of BMW xDrive supports that brand-typical driving experience and is particularly strongly effective in the driver experience control modes SPORT and SPORT+. The targeted transfer of drive force to the rear wheels enhances agility when steering into bends.

Furthermore, the BMW M340i xDrive Sedan is equipped as standard with the M Sport differential. The electronically controlled, fully variable rear-wheel locking function noticeably contributes not only towards an increase in traction, but also enhances stability and agility of the vehicle.

M-specific suspension technology transforms performance into dynamics.
The construction concept used for the suspension of the new BMW 3 Series Sedan offers the ideal prerequisites for sporty handling. The components of the double-joint spring strut front axle and the five-arm rear axle, both of which have been optimised in terms of weight and stiffness, enhance cornering dynamics and steering precision, as do the larger track widths and optimum wheel camber angles. In addition to a vehicle lowering by 10mm, the standard M Sport suspension of the BMW M340i xDrive Sedan comprises M specific elastokinematics and the new lift-related damper control function. The Adaptive M suspension with electronically controlled dampers is also optionally available.

A further integral part of the M Sport suspension and the Adaptive M suspension is the Variable Sport Steering feature, which supports agile cornering with outstanding feedback as well as spontaneous and precise response.

Design and equipment features with a clear emphasis on sportiness.
The new BMW M340i xDrive Sedan’s superior performance characteristics are reflected in model-specific design and equipment features. The design of the front apron, the side sills and the rear end, optimise both the cooling air supply and aerodynamics. Unique design elements include the BMW kidney grille boasting a mesh design, the rear spoiler in body colour and trapezoidal exhaust tailpipe trims. The vehicle’s exclusive look is also complemented by exterior mirror caps, air intake struts, the front surfaces of the BMW kidney grille, tailpipe trims and the model lettering all finished in Cerium Grey metallic.