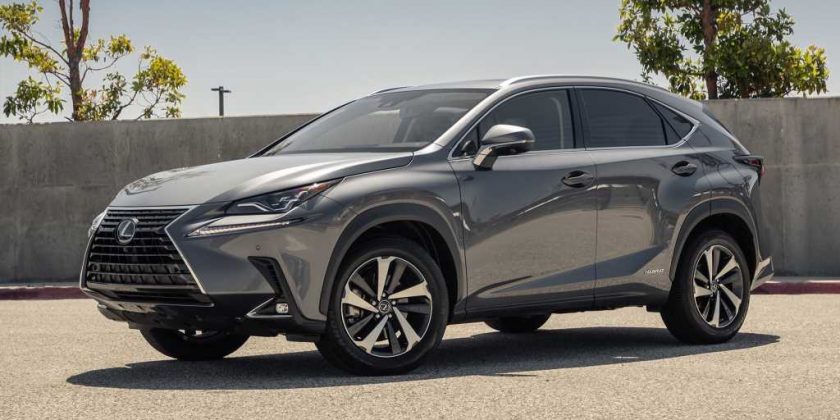 Lexus effectively created the mold for the modern car-like luxury SUV a couple decades ago with the RX, which took home our inaugural SUV of the Year award in 1999. The rest is simple, yes? Carve angular Lexus bodywork onto the RAV4 platform, pack it with as much luxury and tech as the desired price point affords you, collect sales.

When the then-new NX competed in SUVOTY 2015, we named it a finalist, praising the gutsy turbo-four and cleverly tuned automatic transmission. But five years later, riding on what is now last-gen RAV4 architecture, does the hybridized NX still make sense?

H Is for Hybrid

We’ll start with powertrain. In place of the NX 300’s 235-hp turbo-four sits a 154-hp 2.5-liter naturally aspirated four-cylinder. It’s supplemented by three electric motors—one on each axle—plus a starter-generator mounted to the engine, and total system horsepower sums to 194 hp. All-wheel drive is standard.

The electric motors do allow for an EV drive mode, but like other Lexus hybrids we’ve driven, it’s unlikely you’ll make it out of the parking lot or driveway without the engine kicking on. As far as fuel economy benefits for the hybrid, results are stout. Non-hybrid AWD examples are rated at 22/28 mpg city/highway, and the 300h returns 33/30 mpg. Those are impressive numbers, until you realize the more affordable 2020 RAV4 Hybrid achieves 41/38 mpg and produces an additional 25 hp.

Whereas the turbocharged NX sends power through a six-speed conventional automatic, the NX 300h utilizes an electronic CVT auto. The implementation of a CVT in the RX 450h I was driving a couple weeks ago finally convinced me that a transmission of the continuously variable sort can be a better choice than an old-school auto, but it just doesn’t work for me in the NX.

Because the meager four-cylinder and modest electric assistance are tasked with the motivation of the hefty 4,200-pound NX, I found myself using full throttle what felt like constantly. In a car with a CVT, full throttle means your engine will be groaning away at consistent high rpms. That’s an unpleasant and far too frequent occurrence in the 300h.

Full throttle and high revs can be fun in a slow-car-fast way—think Mazda Miata—but in a luxury car it just made the powertrain feel underwhelming and inadequate. This is the slowest car from a luxury nameplate I’ve driven. Lexus’ numbers have it wheezing to 60 in 9.1 seconds, over 2 seconds behind the standard NX.

Another issue I take with the NX driving experience is that this is a difficult car to drive smoothly. The RX hybrid had me feeling like a chauffeur school alum within minutes, but the NX has an overly eager throttle pedal and brakes that are harder to modulate. I noticed myself apologizing to passengers and making excuses like “I’m still getting used to it.”

Lexus includes a generous collection of active safety features on every NX and adds lane centering and road sign assist for 2020. The adaptive cruise control system is passable, but the lane keep assist and lane centering had me consistently bouncing between lane lines or crossing over them all together.

I will say that this chassis surprised me with its willingness on a twisty back road. Turn-in feels sharp for a car of this size, and it even indulges with a whiff of the lift-throttle mid-corner rotation I crave in a driving companion. My parade was interrupted by a downpour of overly invasive traction control (even when turned off) and the lack of power. For enthusiastic driving you could do a lot worse, as long as the road has some curves to it.

Look around the cabin, and things aren’t much better. The leatherette upholstery looks rich, but the material feels thin and cheap despite ample seat and armrest padding. Exposed stainless steel bolts can be seen on either side of the center console. They were a better reminder that I haven’t watched Young Frankenstein in a while than they were an indication of a $45,000 luxury interior.

I was pleasantly surprised with the rear seat accommodations. I could easily fit my 6-foot-1 frame behind my own driving position, and headroom was not an issue. Cargo volume for the hybrid drops 0.9 cubic foot compared to the non-hybrid model, and the resultant 16.8 cubic feet of space is rather tight considering the similarly sized Acura RDX (29.5 cubic feet) and Lincoln Corsair (27.6 cubic feet).

If you were wondering, the newer Toyota RAV4 Hybrid boasts 37.6 cubic feet of volume behind its rear seats. Were the NX riding on the current RAV4 platform instead of that of the last-gen model that debuted in 2012, we have to imagine it would have a lot more room.

And of course, no Lexus review would be complete without mention of its infotainment system. The NX employs the same laptop-lookin’ trackpad infotainment controller as the rest of the Lexus lineup, and it’s far from ideal.

My inputs were not always met with the same results on screen, and I rarely selected the intended icon on the first try. Entering an address was an exercise in frustration, as I’d frequently enter the wrong letter only to waste another five seconds feebly coaxing the cursor onto the backspace key. In the case of any action that requires the trackpad, I’d spend less time with my eyes off the road if I picked up my phone.

It doesn’t excuse the rest of the interior, but I’d be remiss not to express my appreciation for the NX’s volume knob. The dial turns with a syrupy resistance, aping the feel of home audio system instrumentation I wish I could afford; it’s one of the few pieces of this car that make it feel expensive.

As it sits, the 2020 NX 300h is a difficult car for me to recommend. Unless the new-for-2020 Android Auto support is a must, this year’s model does little to disguise its aging bones. You’d be better off with a pre-owned example or a new RAV4 Hybrid. Lucky for us, the second-gen NX is on its way soon.

If the contemporary RAV4 is any indication, this car’s successor will offer additional power, significantly more cargo space, superior efficiency, and a stronger argument to consider the NX in a crowded and competitive segment of compact luxury SUVs. I sure hope so.