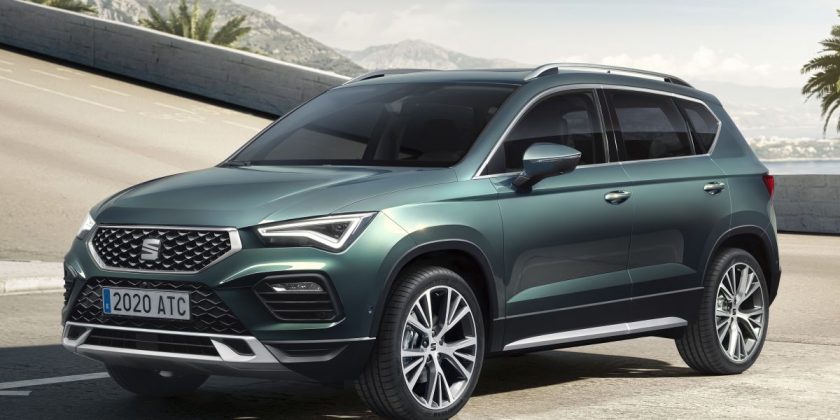 The Seat Ateca, which first surfaced in 2016 as the Spanish brand’s first ever SUV, has been given a facelift. A win for the VW-owned brand, the Czech-made Ateca has found over 300,000 homes since its debut and is one of the company’s most successful models. This 2020 refresh brings a “more emotional” exterior design, a refreshed cabin, new tech and updated powertrains.

If Seat didn’t change much, it’s because the Ateca is far from broke – 2019 was the SUV’s best year ever with nearly 100k units sold. In front, there’s a new grille and reshaped bumper that follows Seat’s latest design language. The headlamps look similar, but are new – lighting wise, one can get full LEDs in front and rear LED items with dynamic turn signals.

The car you see here is the new Xperience trim level, which adds a dash of off-road character to the SUV. A black lower outline with aluminium-look highlights characterises this trim. The other trim options are Reference, Style and the sporty FR, which gets Cosmo Grey Matt exterior bits. Wheels range from 16- to 19-inches and there are 10 paint colours including this new Dark Camouflage green.

Not much has changed in the cabin, which looks quite old school compared to the VW Group’s latest offerings. New partsbin items have been added though, and they include the 10.25-inch digital cockpit instrument panel (improved HMI and diagonal view) and an infotainment system in 8.25- or 9.2-inch sizes.

Kit wise, there’s a new heated steering wheel (the steering itself is new) and an “all-weather windscreen” with an invisible coating called Climacoat. This allows the windscreen to be defrosted in just two to three minutes, minimising strain on the system. It also doesn’t add any reflections for a clearer view. Seat says that there are new door moulding materials with a stitching effect, new upholsteries, matte trim for much of the dashboard and multicolour ambient lighting. The driver’s seat has eight-way electric adjustment with memory for the wing mirrors as well.

Connectivity is a big upgrade because Seat admits that the world has changed since the Ateca first debut. The standard 8.25-inch Media system gets smartphone audio compatibility, while the 9.2-inch Connect system adds on navigation and voice control. The latter wakes up when one says Hola Hola – this is a Spanish car. There are new illuminated Type C USB ports.

There’s Android Auto, Apple CarPlay and Seat Connect with an embedded SIM, which is free of charge for one year. The latter includes eCall, which auto calls emergency services when an accident happens, sending responders location and info. Of course, there’s also a mobile app with remote control and status/data. Besides connectivity, safety systems have been updated to the latest available kit within the VW Group. The ADAS suite here includes Pre-Crash Assist, Predictive Adaptive Cruise Control, Travel Assist, Emergency Assist and Side and Exit Assist.

Travel Assist uses ACC and Lane Assist to drive semi-automatically at speeds of up to 210 km/h. At least one hand must be on the wheel – if the wheel detects that no hand is on it for more than 15 seconds, warnings will be given, including a braking jolt.

Lastly, powertrains. The VW Group’s latest TSI petrol and TDI diesel options are available, with four in each camp. For petrol, it starts with a three-cylinder Miller cycle 1.0 TSI with 110 PS and a manual gearbox. The 1.5 TSI with active cylinder management (runs on two cylinders when possible) and 150 PS can be had with a manual or DSG gearbox. The top option is a 2.0 TSI with 190 PS, DSG and 4Drive AWD.

In the diesel camp, the 115 PS 1.6 TDI is no more, replaced by an all-2.0 TDI line-up. Again, the base engine (115 PS) is manual-only, while the 150 PS version can be had with a manual or DSG. Choose the latter and you can have 4Drive or not. All TDIs have a new twin dosing SCR system with dual AdBlue injection to significantly reduce NOx emissions. All meet Euro 6AP standards.

By the way, Seat’s performance brand Cupra has a mad version of the pre-facelift Ateca, with 350 PS/440 Nm, 0-100 km/h in 4.9 seconds, a titanium Akrapovic exhaust, ABT Sportsline upgrade pack and 20-inch wheels.