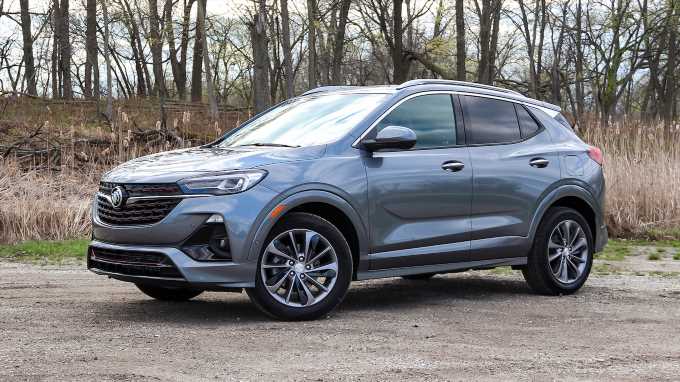 If Jay-Z was seeking a Buick when he asked for an “encore” in his 2003 song of the same name, then the legendary Brooklyn-born rapper is in luck, because the American brand now sells two Encores: the subcompact Encore and the larger, but not quite compact, Encore GX. Yet despite the SUVs’ shared monikers, the Encore GX is neither a trim nor a mechanical relative of the Encore.

Instead, the 2021 Buick Encore GX forgoes its smaller sibling’s aging underpinnings and four-cylinder engine for a newer General Motors platform and a pair of available three-cylinder engines. (Chevrolet also employs these mechanical pieces in its Trailblazer SUV.) A 137-hp turbocharged 1.2-liter I-3 comes standard across the board, but a more powerful 155-hp turbocharged 1.3-liter three-cylinder is available as a $395 option on Encore GX Select and Essence trims.

Regardless of engine, all Encore GX FWD models rely on a continuously variable automatic transmission (CVT) to serve as the middleman between the engine and drive wheels. Buick also fits the bigger engine under the hood of any Encore GX equipped with the optional ($2,000) all-wheel-drive system. Going the AWD route sidelines the CVT in favor of a nine-speed automatic transmission, but also adds around 180 pounds to the SUV’s curb weight relative to its 1.3-liter-equipped FWD counterpart (which itself weighs about 40 pounds more than the equivalent 1.2-liter Encore GX).

With less mass to lug around and a responsive CVT, the Encore GX 1.3T FWD feels far livelier than its AWD kin. Although we were not able to bring this two-wheel-drive Buick to the track, we feel confident the less portly Encore GX FWD ought to cut a few ticks from the 9.3-second trot to 60 mph and 17.0-second run through the quarter mile we recorded from an Encore GX AWD.

Still, we hesitate to call Buick’s second-smallest SUV quick. Pinning the right pedal to pass slow-moving traffic at highway speed remains a rather tedious affair, which the CVT exacerbates by racing the I-3 toward its redline and causing a lot of noise without much thrust.

The powertrain performs more favorably around town, as the transmission works with the larger engine’s peak 174 lb-ft of torque—available at a low 1,600 rpm—to spur the nearly 3,100-pound Encore GX forward from stop signs and stop lights with reasonable gusto and minimal droning (provided the CVT keeps the crankshaft spinning at less than 3,000 revs). In fact, the 171.4-inch-long Buick feels particularly adept in urban environments as its electric-assist steering’s quick ratio and low effort make it easy to maneuver through narrow city streets and crowded parking garages.

If only the Encore GX’s ride quality lived up to its Buick badge. Alas, the Encore GX’s suspension tuning feels more befitting of a compact sports car than a near-luxury SUV. Instead of insulating its passengers from bumps in the road, the Encore GX seems to amplify every abrasion marking the tarmac. The stiff suspension setup makes riding in this Buick as uncomfortable as sharing an elevator with Hova and Solange Knowles at a 2014 Met Gala afterparty.

Add the $650 Sport Touring package and the Encore GX at least looks a little more the part of a hot hatchback, as the purely cosmetic kit adds body-color lower trim pieces, more aggressive front and rear fascias, red accents on the grille, special badging, and package-specific 18-inch wheels. The items add some extra flair to the tall and stubby Encore GX while also enhancing some of the SUV’s more attractive design details, including its rear fender haunches and the upper window trim that gracefully merges with the rear hatch.

Strangely, the Sport Touring package does not touch the Encore GX’s interior. There is no special badging, sporty trim, or paddle shifters (there is a shifter-mounted rocker switch that affords control of seven ratios, though). The cabin is standard Encore GX, which is a generally inoffensive place, save for some chintzy faux stitching and mid-grade piano black plastic pieces on the dashboard and center console. Sure, a Mazda CX-30 both looks and feels richer, but the Encore GX’s insides are certainly built to a reasonably high standard with materials that are—for the most part—unobjectionable.

The space benefits from an ergonomic design courtesy of its simple climate controls, intuitive and clear gauge cluster display, and high-mounted 8.0-inch touchscreen infotainment system, which comes standard with wireless Apple CarPlay and Android Auto compatibility. Additionally, a tall seating position offers a commanding view of the road ahead. Buick carves out plenty of space under the front seats for rear passengers to place their feet, and as a result, the Encore GX’s rear bench feels more spacious than its 36.0 inches of legroom suggests. That middling figure falls short of competitors such as the Jeep Compass and Kia Seltos, which offer 38.3 and 38.0 inches of stretch-out space, respectively.

The Encore GX’s cargo bay offers just 23.5 cubic feet of space behind the rear seats and 50.2 cubes with the 60/40-split seatbacks folded, sums that fall short of the Compass and Seltos by between 3.1 and 12.6 cubic feet. But the little Buick at least makes the most of its usable space by incorporating features such as a reconfigurable cargo floor and a flat-folding front passenger seat.

Nor is the Encore GX a value leader, as the model’s $25,395 starting sum tops that of compact SUVs such as the $24,995 Chevrolet Equinox. Opt for the Buick’s bigger 1.3T engine and the Encore GX’s base price swells to $27,390, though that figure includes features missing from the base model such as heated front seats, a power driver’s seat, dual-zone automatic climate control, and a blind-spot monitoring system. The mechanically similar $26,255 Chevrolet Trailblazer 1.3T, meanwhile, undercuts its Buick-badged cousin by $1,135.

Start adding items such as an in-dash navigation system, adaptive cruise control, a surround-view camera, and a head-up display, and the cost of the Encore GX 1.3T quickly balloons past $30,000. This is a hard pill to swallow considering a similarly equipped Trailblazer rings up for thousands of dollars less, and a top-of-the-line 175-hp Kia Seltos with AWD barely breaks $30,000.

We were never really sure we wanted a follow-up to the original Encore, let alone a second Encore model. The 2021 Encore GX 1.3T FWD improves upon the blueprint of its smaller and similarly named stablemate, even if this latest addition to the Encore family would be more deserving of an ovation if Buick improved the model’s ride quality and value proposition.