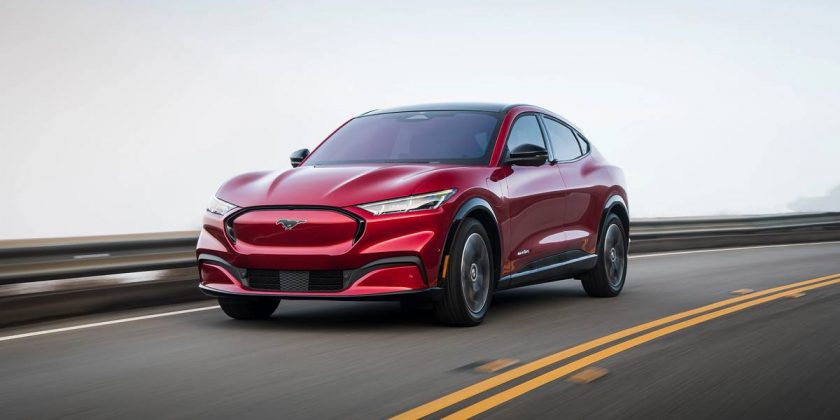 The 2021 Ford Mustang Mach-E has a lot going for it, and a few things working against it. Most of the former is clear from looking at the specs, features and photos. I’m going to lay out a lot of those things, but there’s been a fair amount of praise out there about the Mach-E in the past week or so, and we at Cars.com have never been ones to hide a dissenting opinion. Buckle up for that as well.

As for what’s good about the Mach-E, just look at the numbers. EPA-estimated ranges extend from 211 miles with the base model’s battery and all-wheel drive to 300 miles with an optional higher-capacity battery and rear-wheel drive (Ford is targeting 305 miles in the California Route 1 version, currently unrated).

For the trim levels available now — Select, Premium, First Edition (sold out) and California Route 1 — prices range from $43,995 to $50,900 including destination charges but excluding a federal tax credit of up to $7,500 (depending on your finances). Assistant Managing Editor Kelsey Mays and I tested a Premium all-wheel-drive model with the higher-capacity battery over the course of 48 hours. It has separate front and rear drive motors with total 346 horsepower and 428 pounds-feet of torque. 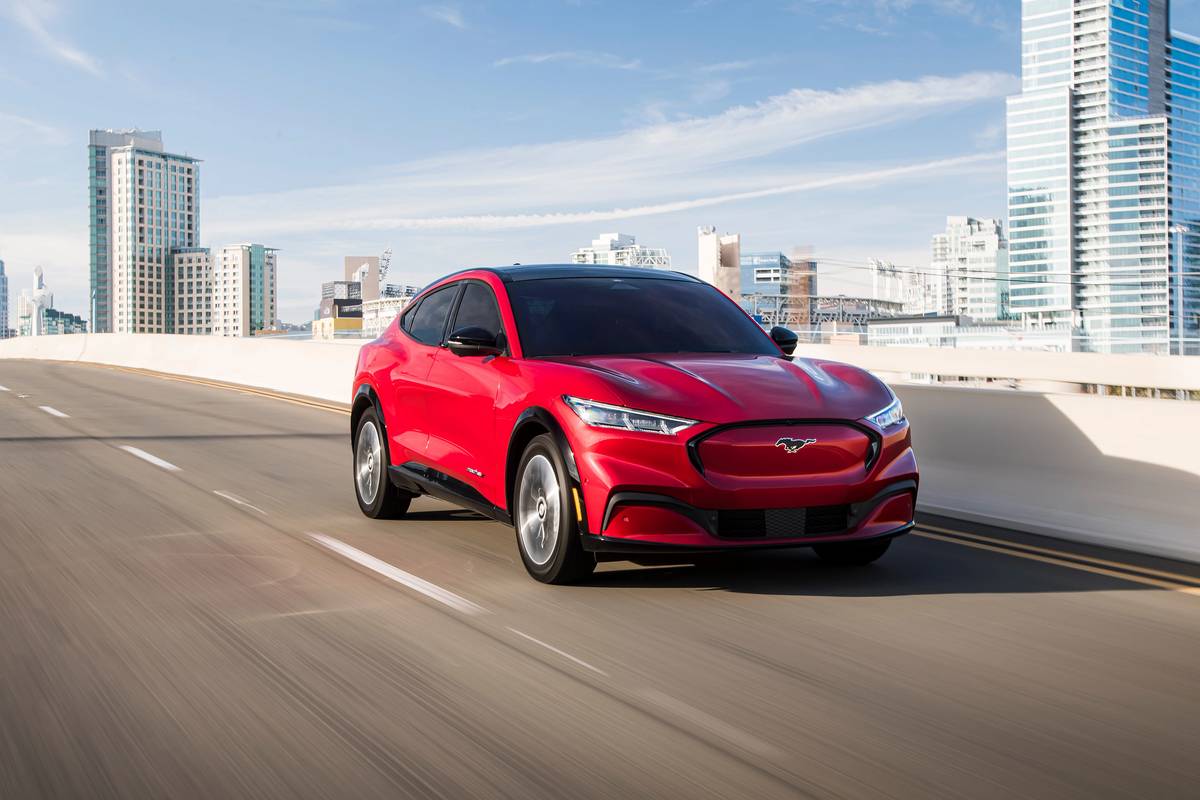 The Mustang Mach-E is a good-looking, distinctive vehicle in a class where some models are peculiar and others are indistinguishable from gas-powered options. You get in by way of push-button door releases, which I’ve never been a fan of, but I can’t find fault with these. You simply push the button on the outside, and the door pops out. The front ones have wings you can grab as well. What’s this no-handle design about? It’s partly to remove the aerodynamic drag that comes from any kind of door handle. Apparently the front door wing handles at the base of the windows are designed with benign effect. Most important, the doors have normal-feeling release levers on the inside — unlike the electronic releases inside the Chevrolet Corvette, which never felt right to me. 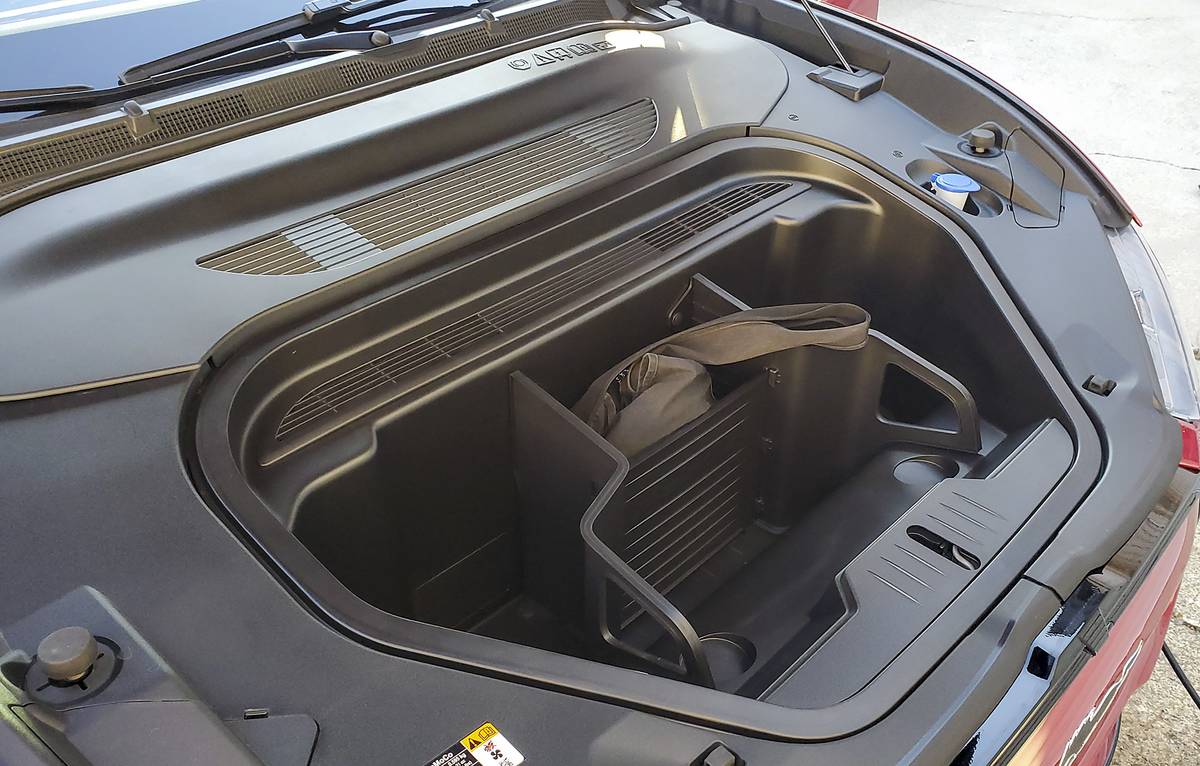 Absent an engine under the hood, the Mach-E has a front trunk, and I wish I could praise it as much. It requires you to pull what’s essentially a hood release, twice, in the driver’s footwell in order to open it. There’s no handy push button on the car, key fob, touchscreen or app, as you would expect of a space intended for frequent use. The space itself is clearly secondary to the rear cargo area, but easier access would have been worthwhile.

As full battery-electric SUVs go (if that’s what this is), the Mach-E manages to be reasonably accommodating inside without being gigantic outside, unlike the pricey Jaguar I-Pace, another electric vehicle. We often have problems with Ford seats; these aren’t bad, but a bottom-cushion tilt adjustment is missing, and was missed. Rearward visibility isn’t great due to the thick rear window pillars. A full-time rearview-camera mirror would be a good addition. 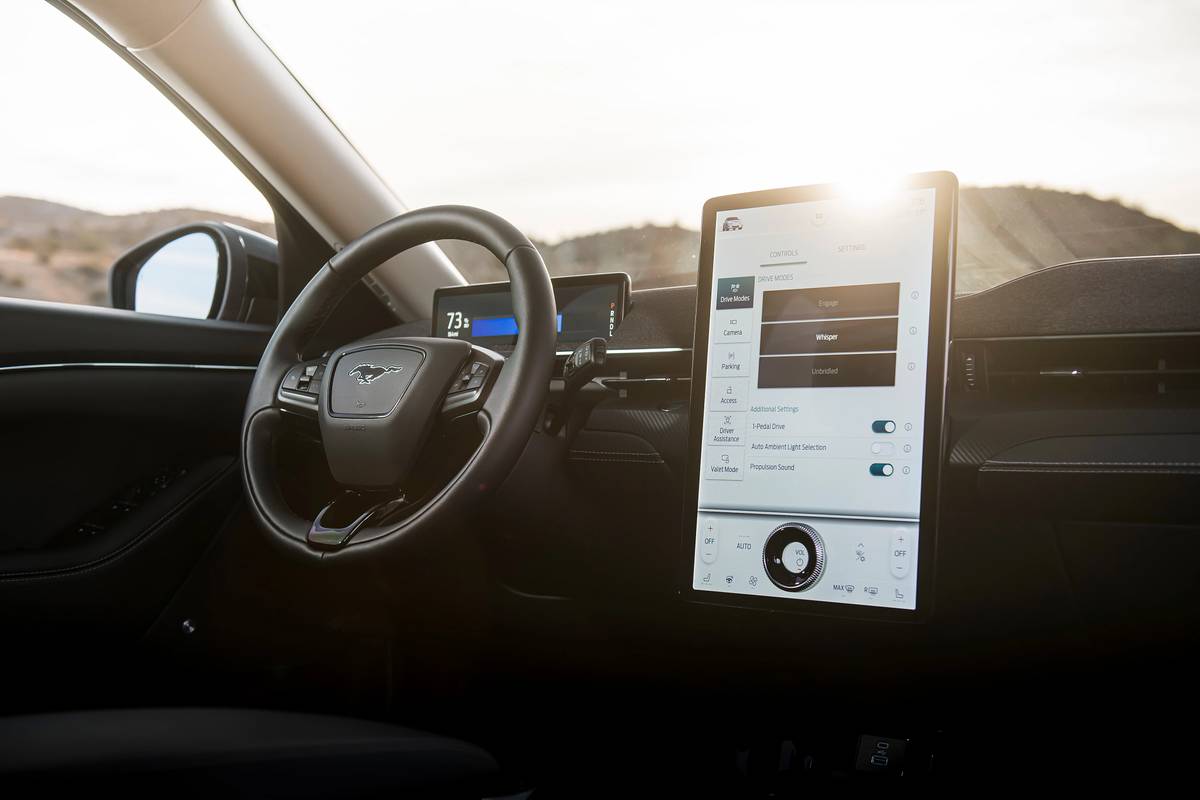 In terms of controls, the Mach-E seems closest to the Tesla Model Y with a large touchscreen that looks like a floating tablet, but the Ford also has a minimalist instrument panel, itself a digital display, behind the steering wheel — something Tesla vows never to include. The Mach’s tablet measures 15.5 inches diagonally (13.5 inches excluding the fixed section for ventilation controls), and it’s oriented vertically rather than horizontally like the Model Y. Its large physical volume knob, which Ford plants in the lower-middle screen, is a plus, though I think Tesla’s onscreen interface is better. With its over-the-air updatability, there’s opportunity for improvements in this regard. 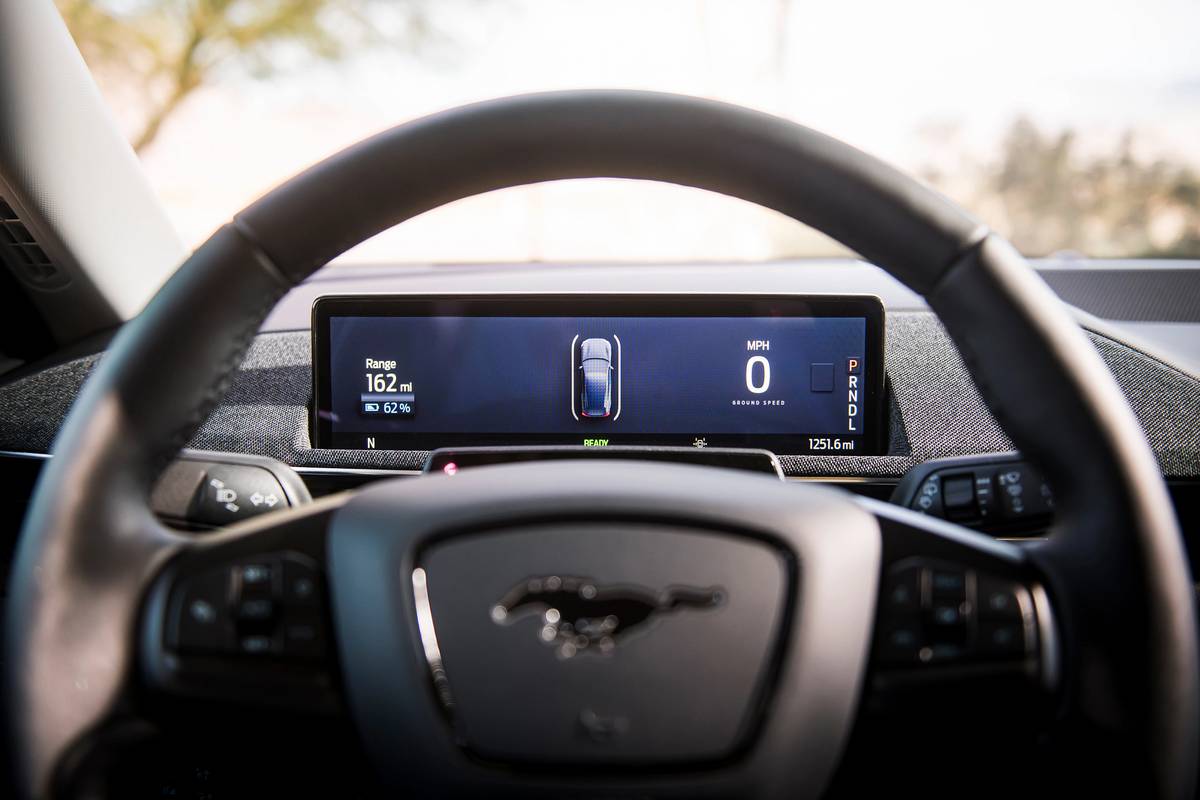 Our one big takeaway about the Mustang Mach-E with 19-inch wheels was that it didn’t ride well. We set the tire pressures to spec, as we do religiously, but we found the ride quality hard and unsettled, particularly for a compact premium SUV. The car’s dynamics are decent, with the expected low center of gravity and minimal body roll. Our AWD car had a definite understeer bias nosing into a curve when off the power, but hitting the accelerator balances it out and even loosens up the tail. As is often the case with electrics, you can’t escape the feeling of the car’s weight when changing direction. Our Mach-E’s base curb weight is given as 4,920 pounds with all-wheel drive, an enormous 526 pounds higher than the rear-drive version.

Ride quality depends on personal preference and region (ride quality relates to road quality), and it’s worth noting that the Mach-E offers 18-, 19- or 20-inch wheels, all of which may affect tire profiles and ride harshness. To those ends, Kelsey and I are both sticklers on this issue, and there are many vehicles we think ride like hell that nevertheless sell in the millions (the Honda CR-V is one high-profile example). We live in the Chicago area, where the streets are paved yet disastrous, and there’s no shortage of rough riders like the CR-V on our mean streets. 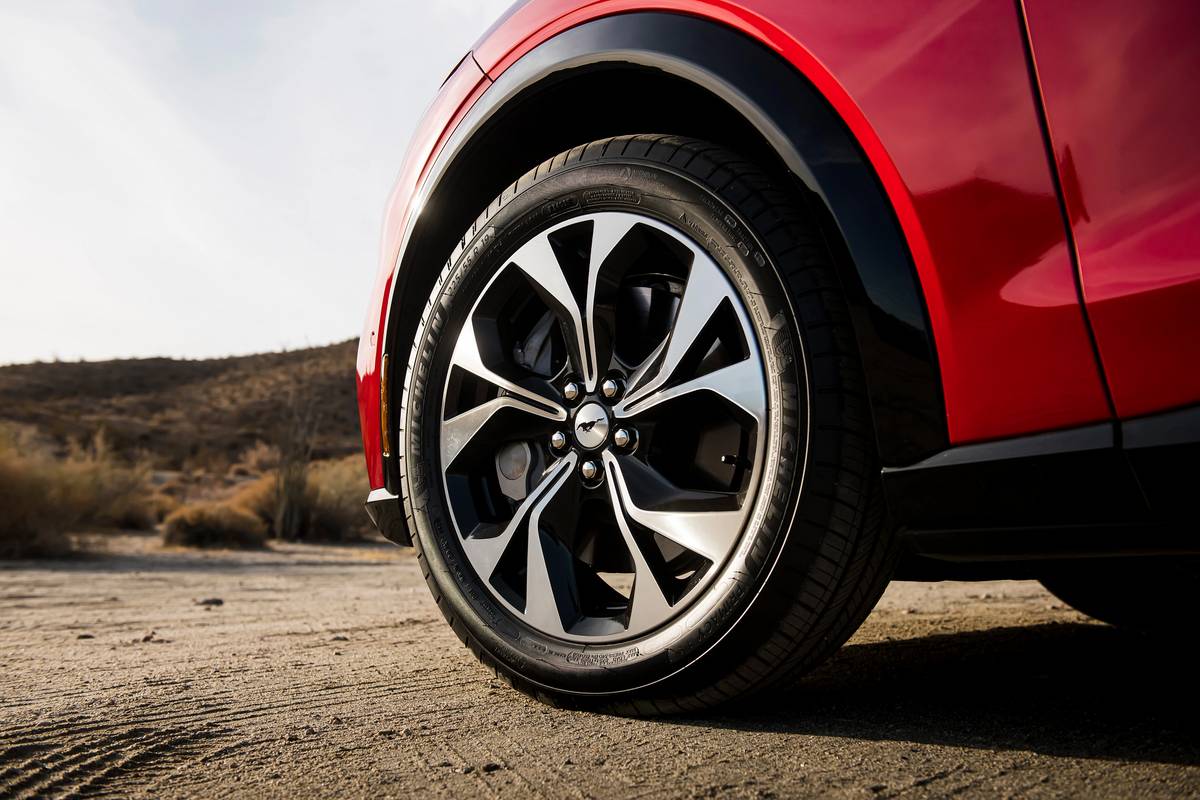 Let’s put things in perspective: We think the Tesla Model S (passive suspension) and Model 3 are also too firm for our region, and by extension, the 3-based Model Y — a key Mach-E competitor — probably is, too (though we haven’t sampled it). But we’ve also spent decades heaping praise on Ford’s frequent ability to provide exceptional handling and ride together. Achieving these seemingly opposing goals in the same vehicle is so rare that I’ve questioned if Ford’s engineers made a pact with the devil. For the Mach-E, well, perhaps their number was up. Or maybe electric-vehicle ride quality is just that difficult. Many examples ride firmly, and not all of them can use sportiness as a convenient excuse. Of the recent crop, I was most comfortable in the Polestar 2, which had manually adjustable shock absorbers set on the softer side. (Laugh if you must, but if the only thing making a car incompatible with your region or preferences is suspension tuning, a one-time adjustment is a pretty compelling option.) The Polestar 2 has its own limitations, most notably its price, partly because of import tariffs (it’s assembled in China).

Another disappointment for a car bearing the Mustang badge was the braking — not the stopping power, which seemed strong, but the pedal action and controllability. We found it very grabby to start and nonlinear through the range of travel. Regenerative braking action has always been difficult to perfect, but it’s been improving across the market. Not so much here. I switched to the Mach-E’s driver-selectable 1-Pedal Drive mode, which activates strong enough braking when you lift off the accelerator that you barely have to use the brake pedal at all. I always like this type of mode even when not trying to avoid a frustrating pedal, and you might find yourself trying it even if you don’t usually care for it. In the Mach-E’s default mode, the car barely decelerates when you don’t step on the brakes. It just. Keeps. Going.

Regenerative braking has a major software component, so we wonder if any part of what we experienced could be improved with code updates, perhaps using the Mach-E’s over-the-air updatability. It is early, and the car is designed to evolve and improve, as Teslas have done for years. To that end, we had a few other quirks with our early release: