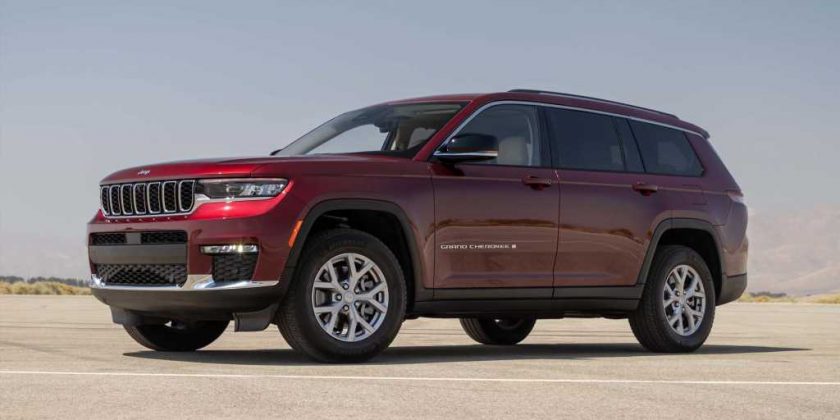 When we learned that Jeep was going to add a third row to the Grand Cherokee, we were a bit skeptical. The first four generations of Grand Cherokee established it as a solid five-passenger SUV, showing the competition how to balance on- and off-road prowess with style. Jeep’s last dalliance with a three-row variant of the Grand Cherokee, the Jeep Commander, was one of the few duds in an otherwise stalwart Jeep lineup. And the timing was odd given the return of the three-row Jeep Wagoneer family of full-size, high-end SUVs.

For all these reasons, the introduction of the 2021 Jeep Grand Cherokee L was heralded with a critical eye. It would be our first look at the fifth-generation Grand Cherokee on a new platform—the two-row model is coming for the 2022 model year. The corporate line is the three-row came first because that’s what customers wanted. The cynic in us wondered if it needed the spotlight because it was a Commander-in-waiting.

Color us pleasantly surprised, because the 2021 Jeep Grand Cherokee L is good. Really good. So good you might think twice about stepping up to the Wagoneer (or the even more luxurious Grand Wagoneer) if you don’t need to go that big.

The fifth-generation Grand Cherokee rides on a new WL platform. Road test editor Chris Walton was surprised by how well the chassis performed in our tests, especially so the models powered by the V-6. “You can really steer it with a throttle,” he said. “If it begins to understeer, lift the throttle and the nose tucks, and then you can go back to the throttle and get it to rotate. Really odd for such a big SUV.”

The less equipped and lighter Limited (4,823 pounds) was the faster of the V-6-powered Grand Cherokee L’s we tested with the 293-hp, 260-lb-ft 3.6-liter V-6, rumbling from 0 to 60 mph in 7.3 seconds compared with the 5,171-pound Summit, which needed a full 8.0 seconds. Similarly, the Limited did the quarter mile in 15.5 seconds, whereas the loaded Summit needed 16.1 seconds. Associate road test editor Erick Ayapana found the power in the Limited “more than adequate” and noted its snappy shifts.

Interestingly, in the braking tests, the heavier Summit stopped in 4 fewer feet than the Limited, slowing from 60 to 0 mph in 123 feet. The test team attributed the Summit’s shorter stopping distance to its bigger and better 275/45R21 Continental CrossContact LX Sport tires. Ayapana noted the great pedal feel on all the vehicles, but the Limited was let down a bit by not enough bite from its 265/60R18 Michelin Primacy XC rubber.

Not surprisingly, the Overland with its 5.7-liter Hemi V-8 was the quickest of the three, posting a 0-60-mph time of 6.1 seconds and hitting the quarter mile in 14.6 seconds. Its 357 hp and 390 lb-ft of torque were more than able to make the 5,402-pound Overland hustle. Hauling it down was another matter, though, with far and away the greatest stopping distance of the three at 139 feet.

Skidpad results were fairly average and on the figure eight, where the models with the V-6s proved more nimble and faster: 27.6 seconds at 0.61 g (avg) for the Summit Reserve with its air suspension and bigger and better tires; the Limited with steel springs was close behind at 27.9 seconds at 0.59 g. The beefier Overland needed 28.2 seconds at 0.59 g.

By comparison, the three-row 2022 Nissan Pathfinder Platinum with 4WD, which is almost 300 pounds lighter than the Jeep Limited, proved slightly quicker than the V-6-powered duo at 7.1 seconds to 60 mph and had the shortest braking distance of 114 feet.

The Pentastar V-6 has been around awhile and continues to do yeoman’s duty. We’re betting most buyers would be perfectly satisfied with the smaller engine for their family hauler. But if towing and the visceral snarl of a V-8 are musts, the Overland is the better choice. Both engines work well with the eight-speed automatic transmission for quick, crisp, and smooth shifts, making the most of the powerband to ensure plenty of power is always within reach. And the V-6 is more efficient, getting 18 mpg in the city and 25 mpg on the highway while the thirstier V-8 gets 14/22 city/highway. The Pathfinder 4WD with the V-6 does a bit better in the city at 20 mpg; it nets the same 25 mpg on the highway.

The air suspension on the upper trims of the Jeep Grand Cherokee L is the choice setup, but the standard steel springs on the Limited offer a comfortable ride, as well, thanks in large part to this trim’s adaptive dampers. Overall, we found the Grand Cherokee L has good body control for such a large vehicle regardless of suspension choice.

As far as its steering goes, though it doesn’t feel particularly natural, it is precise and responsive. The lane keep assist could be smoother as it often fights to stay centered, but it operates for a relatively long time without hands on the wheel; it seems to be one small step away from becoming a true hands-free highway advanced driver assist system. The adaptive cruise control was bang on, holding the set speed even down a long hill.

Step Inside This Delightful Cabin

The real delight is in the cabin of the Jeep Grand Cherokee L models, which are well appointed with lovely woods among the high-end materials, finely crafted switchgear, a large infotainment screen that cascades down the dash, and heated, ventilated, and massaging seats. There’s an attention to detail that makes for a premium experience.

The lower down the trim ladder you go, the more thematerials choices change, and you lose features like the massage function, for example. It still feels premium, though. The pampering continues in the second and third rows, where passengers have USB and power outlets, HVAC controls, vents, available heated seats, and lots of legroom. And all can enjoy the excellent available McIntosh audio system.

Folding the second-row seat forward creates a large opening to access the third row, but the mechanics of it might be too heavy for small children to do alone—the Pathfinder ups the Jeep here with a simple button to push. Behind the third row is ample cargo room and underfloor storage.

“Overall, I’m just sort of shocked at how composed and poised this big Jeep is,” Walton said. The Grand Cherokee L, in adding a third row, vies for leadership in a competitive segment and at a decent value with a base model starting under $39,000.

At the higher end of its trim range, especially, it provides a premium experience, offers a comfortable ride with big windows to enjoy the road trip, and adds the off-road capability expected of the Jeep name. To that end, it might be the best three-row SUV on the market.