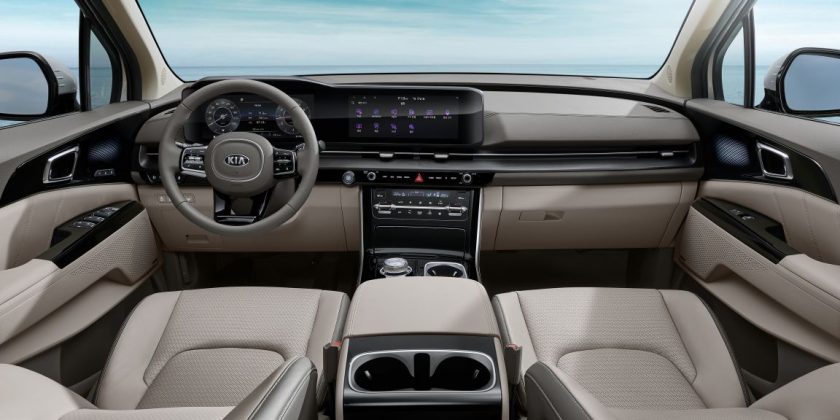 The full reveal of the new fourth-generation Kia Grand Carnival is coming along slowly but surely. Last month, the Korean carmaker showed the exterior of the car, and today it has given us a look at the inside.

Just like the outside, the interior is a sea change compared to the previous model. Dominating the dashboard is a large display panel with twin 12.3-inch screens – one for the instrumentation, the other for the infotainment system. In keeping with industry trends, there are touch-sensitive buttons (with haptic feedback) underneath the full-width air vents, as well as further down for climate control.

The Grand Carnival also gets a very Jaguar-like rotary gear selector, as seen on the new Sorento. Kia has also confirmed that the MPV will retain the existing seven-, nine- and 11-seater seating options, all of which benefit from increased passenger space thanks to the larger dimensions.

Specifically, the new Grand Carnival is 40 mm longer than before, at 5,155 mm. The front overhangs are shorter, resulting in a 30 mm increase in both the wheelbase (to 3,090 mm) and rear overhang (to 1,130 mm). The latter frees up extra third-row legroom and provides claimed best-in-class luggage space.

Seven-seater models will come with “business class” second-row captain’s chairs with adjustable backrests, armrests and ottomans. Concessions for the digital age include second-row USB charging ports, storage nets for mobile devices and a laptop and tablet storage drawer in the rear console.

Kia is continuing to withhold information regarding the powertrains and other mechanicals, with the Grand Carnival only due for a full reveal later on in the second half of the year.