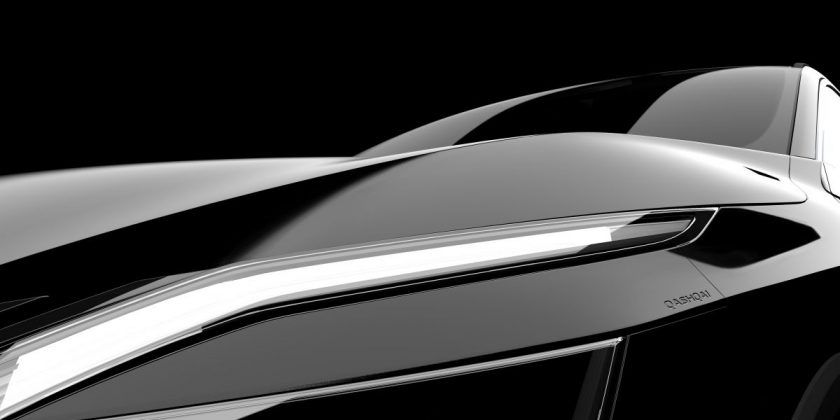 Nissan has released the first teaser image of the new third-generation Qashqai, some six years after its predecessor went on sale. Not much of the next European-market SUV has been shown here, but it’s enough to make clear that the latest model will be a sea change compared to the current car.

Visually, it appears that the Qashqai will take after newer siblings like the X-Trail and Juke with a far more extroverted look. We get just a sliver of the headlight assembly, which like those cars have been split into upper and lower units. Here, however, the two seem to be joined together along the inner edge, giving the lamps a distinctive arrow shape. The body-coloured insert also has the Qashqai script, which is nice.

Also just about visible is the front fender bulge that goes up into the bonnet, which should imbue the car with a very muscular look. Further evidence of the Juke-inspired look are images of a camouflaged prototype, showing the deep V-motion grille, steeply-rising shoulder line and what look to be arrow-shaped taillights.

Beyond that, Nissan has also given us the first details of the new crossover, which is slated to go on sale next year. The car will be the brand’s first in Europe to ride on the latest modular CMF-C platform while retaining the same “just right” proportions as before. Lightweight materials such as ultra-high-strength steel (used 50% more than in the current model) in the body structure, aluminium in the doors, front fenders and bonnet, and a composite tailgate help shave off up to 60 kg from the Qashqai’s body-in-white – all while being 41% stiffer. A more homogenous base structure better transmits any impact through the body, improving crash safety.

The increased torsional rigidity of the CMF-C platform is also claimed to provide better steering response and a more solid feel on rough roads. As is becoming commonplace in the C-segment, the Qashqai will still be offered with two rear suspension options – cars fitted with wheels 19 inches and below come with a torsion beam, while everything beyond that (and all all-wheel-drive models) get the more sophisticated multi-links.

The torsion beam is said to offer improved bump absorption and reduced road noise, incorporating vertical springs and dampers that are able to work in their optimal stroke range; as such, they are able to respond to shocks and bumps in a more controlled manner. The multi-link set-up, on the other hand, gets subframe bushings to reduce road noise and vibration, with Nissan claiming a best-in-class ride and handling balance.

Elsewhere, the front MacPherson strut have been retuned and the power steering upgraded to improve response, feedback and smoothness. As for the powertrains, the Qashqai will retain the same Renault-sourced 1.33 litre turbo four-pot petrol mill as before (yes, the same one you’ll find in the Mercedes-Benz A 200), but with a 12-volt mild hybrid system to increase the duration of the stop/start system. For the first time in Europe, the Qashqai will also debut Nissan’s clever e-Power hybrid powertrain, which drives the car solely using an electric motor that itself draws energy from a petrol engine – no charging port required. As expected, the company is keeping full specifications until closer to the on-sale date.

The ProPilot semi-autonomous driving feature has also been upgraded with Navi-link, allowing the system to adapt to the speed limit using navigation data and traffic sign recognition. With this added functionality, ProPilor can also adjust the speed in preparation of entering corners or tight exit ramps. The blind spot monitor can also help the system intervene if the car is crossing lanes into the path of another vehicle.

Other new safety equipment include a “flank protection” warning to alert the driver if they are about to collide with an object on the car’s side, as well as an upgraded Moving Object Detection feature that will brake the car to prevent a collision at low speeds. Lighting technology has also taken a big step forward with matrix LED headlights that will turn off individual high beam diodes to avoid dazzling other motorists.