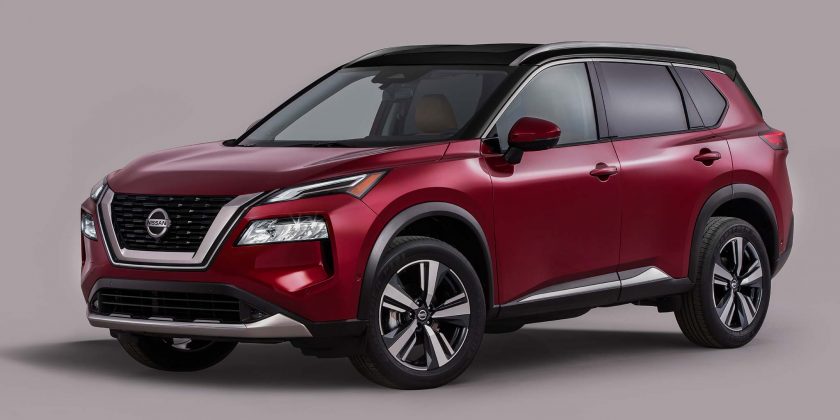 The Rogue is Nissan’s best-selling vehicle, ranking No. 3 on the sales charts in the white-hot compact SUV segment behind the new-for-2019 Toyota RAV4 and (new-for-2017) Honda CR-V. That’s an amazingly strong showing given that the current Rogue came out in 2013, is less powerful, and has a smaller back seat than nearly all its competitors. For 2021, Nissan is finally poised to right those wrongs and attempt a sales surge.

The third-gen Rogue is based on a significantly revamped version of the current CMF-C/D architecture that now shares some basics with the new Sentra, less with the Altima. It’s cloaked in adventurous styling that was previewed by the X-Motion concept from the 2018 Detroit auto show.

Hallmarks of the design include the “floating” roof (now available in contrasting black), a double V-Motion grille that sweeps up to meet a higher and brawnier-looking hood. In a refreshing change from the norm for most SUVs, it does not get larger—in fact the bumpers are 1.7 inches closer together on a 0.1-inch-shorter wheelbase, and the roof lowers 2.1 inches.

According to Nissan product planning veep Jared Haslam, the team’s overarching aim was to make the Rogue more aspirational to Gen Y families: “These families are really focused on safety. With young kids and a family, it’s not just about the driver anymore. It’s about enhancing the experience in the second row for the kids.”

Less focus on the driver may help explain the very modest engine output bump from 170 hp and 175 lb-ft to 181 of each, just about nailing the average for the class. The engine is, however, 95 percent revised. The CVT essentially is a carryover.

Some chassis modifications may incidentally please drivers. These include replacing four rubber-isolated mounts for the powertrain/suspension cradle with six rigid ones and then rigidly mounting the steering rack to that. This change, along with quickening the steering ratio, promises to greatly improve overall responsiveness. And by switching to more sophisticated hydraulic powertrain mounts, we’re assured that vibration and harshness won’t suffer. New Tokico twin-tube shocks utilize two pistons, one to provide high damping rates to low-frequency inputs (bumps, handling maneuvers) and another with low damping for high-frequency (washboard, rumble strips). The rear multilink suspension is revised from a simple semi-trailing arm and lateral link setup to more of a true multilink setup like that Pathfinder’s, and the base 16-inch steel wheels have been upgraded to much more aspirational 17-inch alloys.

A safety-related change to the body structure involves redirecting the crash load paths. Previously, the front frame rails used to head straight back to meet an underfloor cross-car beam well inboard from where the rear frame rails joined it. With the new “smarter crashing unibody,” the front rails curve outward to align with the rear rails. This also improves side impact crashworthiness and results in an increase in overall torsional rigidity of 27 percent.

The 2021 Rogue should weigh in about 100 pounds lighter than a similarly equipped 2020 model. Half of this savings comes from changes to the body-in-white structure, including expanded use of aluminum for the hood and all four doors and increased use of high-strength steel (from 19 to 35 percent). A resin composite tailgate assembly helps shave more pounds. Enhancements to make kiddos aspire to sitting in the rear seat include proximity key unlocking of rear doors (instead of just the fronts) and doors that open to an impressive 85 degrees. (We’ve dinged the RAV4 for its narrow rear door openings.) Once inside, space camp-bound young’uns will appreciate the “zero gravity” low-fatigue spinal support seat design that used to be reserved for front occupants only. Child-seat LATCH attachment hardware is now provided at all three rear seating positions so that two adults or older kids can flank a child seat. SL and Platinum trims get pull-up sunshades on the side windows, seat heaters, and a segment-exclusive third climate-control zone.

Despite the shorter wheelbase, the Rogue is roomier in back, with a notable 0.6-inch legroom improvement and an extra 0.7 inch of head room. Gone is the second row sliding-seat function, unnecessary now that the Rogue no longer offers a third seating row.

Some of that rear-seat spaciousness comes at a cost to cargo room, which drops from 39.3 to 36.5 cubic feet. But the space available with the rear seats folded expands from 70.0 to 74.1 cubes, and the rear hatch opening is larger and more square than before, measuring 45.6 by 31.2 inches. The Divide-N-Hide floor panel system has been rejiggered to eliminate the upper shelf position (few used it, and its supports consumed cargo area width); now the panels mount flush with the bumper lift-over, they come out or rest on the subfloor, and the rear one can mount vertically to divide the area.

Plenty of effort went into making moms and dads aspire to sitting in the front row as much as kiddos dig the second row. The base infotainment screen expands from 7.0 to 8.0 inches—still with standard CarPlay and Android Auto—while a higher-resolution 9.0-inch screen brings built-in navigation to the SL Premium package and the Platinum trim.

Similarly, the driver info screen in the instrument cluster jumps from 5.0 to 7.0 inches, and a 12.3-inch diagonal fully digital cockpit serves Platinum models along with a 10.8-inch color head-up display. An electronic shifter frees up lighted storage space between the front footwells, and twin center-opening lids on the main console makes it easier for both rows to access the bounty stored within or to share the twin USB-A and USB-C ports inside.

One step down, the SL grade still gets 19-inch wheels, leather seats, a pano roof, a hands-free liftgate, and power seat and steering wheel memory with the option of adding the Platinum’s cruise and audio. Buyers at the SV level get 18-inch wheels, a more basic version of ProPilot Assist, and a Premium option to grab some of the SL trim goodies. Ten colors are offered, five of which can be two-toned with a black roof.

Fuel economy may not seem that important given today’s gas prices, but Nissan went to great lengths to increase EPA ratings by a couple miles per gallon. All Rogues get underbody covers, active grille shutters, air curtain inlets by the foglamps that encourage smooth air flow over the spinning front wheels, deflectors to route air flowing under the bumper around the front tires, and drag-reducing features at the rear—including the taillamp shape and spoilers at the top and side of the rear window.

For now, Nissan is ceding the aggressive off-roader market to the Jeep Cherokee Trailhawk and Toyota RAV4 Adventure. Likewise, it’s leaving the hybrid business to Honda and Toyota. But if sales prove strong enough, Nissan’s hybrid system will package easily. Speaking of powertrains that fit, Nissan could trump the market with a track-rat 268-hp, 280-lb-ft 2.0-liter VC-Turbo-powered Rogue NISMO. But don’t hold your breath. Creating  such a vehicle would violate this Rogue’s “families-first, drivers-second” design brief.

Although this 2.5-liter engine was also new for the 2019 Altima, we were so distracted by the upmarket 2.0-liter VC-Turbo mill replacing that car’s V-6 that we neglected the base engine’s cool new features. These include a global first: thermally insulated resin intake ports, which are inserted into the cast intake runner, leaving an air gap to the cylinder head material. This helps keep the intake charge cooler, improving anti-knock performance.

The intake and exhaust cams trade places, and the exhaust manifold is integrated into the back side (as mounted in the vehicle) of the cylinder head. There’s a variable-displacement oil pump, and the Mirror Bore manufacturing process used on the GT-R and some NISMO engines is applied here. An electrically charged wire sprays molten iron onto the cylinder walls to a depth of approximately 0.2mm thick, and this surface is then honed with a diamond-encrusted bit to achieve an ultra-low-friction surface.

Rogue gets the latest ProPilot Assist

Nissan’s smartest cruise control system takes another step forward in the Rogue application by integrating with the built-in door-to-door navigation system. It leverages navigation database information about speed limits and curve radii to provide automatic speed-limit adherence (no offset can be set at this time), to reduce speed automatically in sharper curves.  When a rise or drop in the speed limit is detected, it notifies and offers the driver the option of adjusting to the new posted speed.

It also will understand when you are transitioning to an exit ramp, in which case, instead of seeing no car ahead and attempting to resume a set highway speed, the system will target a 35-mph or lower speed, determined by the curvature of the off-ramp as gleaned from the navigation. The time it will wait to resume driving in stop-and-go traffic rises from 3 seconds to 30, after which the driver still must touch the accelerator or “resume” button.

The system gets a longer-range radar and wider-field-of-view camera, to better predict and thus smooth braking events. It also can detect and adjust for people cutting into your lane more smoothly. And the lane-following steering assist tuning is improved for better on-center feel.