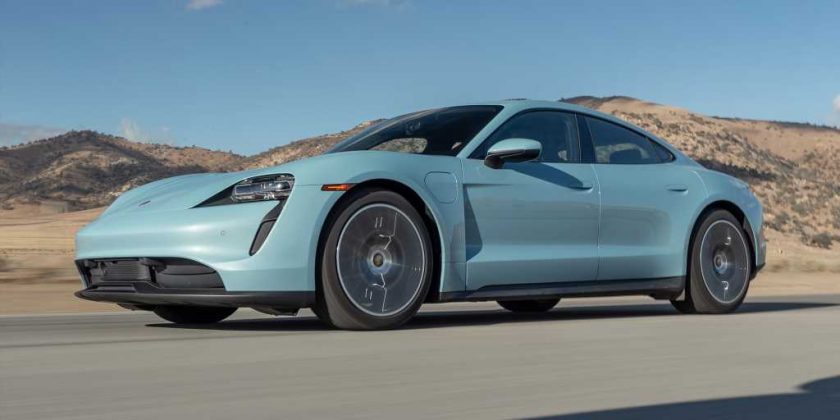 One of the most intense debates we had during our 2021 Car of the Year program concerned the 2020 Porsche Taycan’s efficiency. “You are looking at the least efficient fully electric vehicle currently produced today, period,” we wrote last year. It’s that lack of efficiency that ultimately worked to hold the Taycan back from the Golden Calipers. A year later with a new, more efficient single-motor rear-drive variant, is 2022 now the time for the Porsche Taycan to shine?

It would certainly seem promising. The updated 2021 Taycan sports the same underpinnings as last year’s finalist car, but it loses the Taycan 4S’ front motor and instead offers up two power and battery pack configurations. The standard setup features a 79.2-kWh battery pack paired with a permanent-magnet motor making 321 hp and 250 lb-ft of torque, good for 200 miles of range. An optional battery pack (as equipped on our test vehicle) boosts capacity to 93.4 kWh, horsepower to 469, torque to 263 lb-ft, and range to 225 miles. Like all Taycans (and Audi E-Tron GTs), the new rear-drive variant sports a two-speed automatic at its rear axle and is capable of DC fast charging at peak speed of up to 270 kW—largely making up for its “lack” of range with its ability to quickly jam electrons into its battery pack.

When it comes to our performance of intended function criterion, the Taycan absolutely smashed it out of the park. Where many automakers rely on design to express their brand values, the Taycan rests on its engineering. “A true Porsche that just happens to be an EV,” industry expert (not to mention godfather of the Dodge Viper and Ford GT) Chris Theodore said. “Holds its own against 911s.” The Taycan is quick—though not fast—and feels well balanced and neutral through bends. It’s easy to push to your limits and find its limits.

“This just feels like a Porsche, reaffirming the remarkable feat that Taycans are genuinely fun to drive and very on point for the brand,” deputy editor Alex Stoklosa said.

It also won praise for its supple, buttoned-down ride and stellar styling. “The Taycan proves performance car enthusiasts don’t have to fear a soulless future of electric propulsion,” executive editor Mac Morrison said. “It’s enjoyable to drive, understeers less than the Audi version, allows you to rotate it into corners, and it looks fantastic.”

But like the dual-motor Taycans at last year’s Car of the Year program, it wasn’t all roses for the more affordable rear-driver. For starters, there’s the two-speed transmission. Ostensibly included to give the Taycan an autobahn-friendly top speed of 143 mph, the transmission is clunky at the speeds owners will most likely drive, leading us to wonder out loud if the idea of wrapping the motor’s rotor in carbon fiber to allow the motor to spin upward of 20,000 rpm as others are doing is a more elegant solution than a transmission. Also on the subject of speed, Range mode on the base Taycan limits the car to 60 mph, virtually ensuring no owner will ever use it.

We are also still less than enthralled with the regenerative brake tuning. “The choices are off, on, and auto, and I can feel no difference between them,” technical director Frank Markus said.

There are no perfect Car of the Year winners, but the Taycan remains a little too imperfect to earn the Calipers this year. But as Detroit editor Alisa Priddle said, “It’s a deserving finalist. I’ll take the keyfob anytime.”

View every 2022 Car of the Year Contender and Finalist