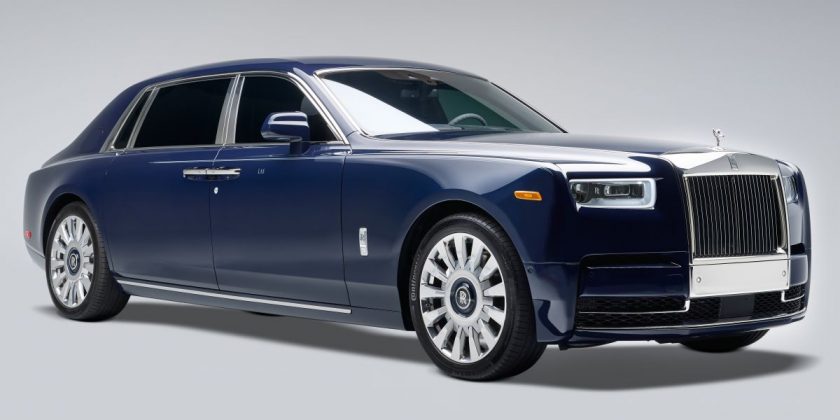 Rolls-Royce has unveiled a new bespoke Phantom for billionaire and classic car enthusiast, Jack Boyd Smith Jr. This particular Bespoke Phantom Extended model features an unusually rare and protected species of Koa wood (it grows in Hawaii only), making it the first Phantom ever to feature the material.

The idea was inspired by Smith’s adoration for the warmth and character of Koa wood (he has a rocking chair made from the same material at home). A Rolls-Royce wood specialist bought the rare log from a supplier for its highly unique velvety character, one he described as “one in a million chance” to find.

The wood is used rather extensively throughout the cabin and can be found on the dashboard, front and rear centre consoles, door handles, seat inserts, and rear table trays. There’s also a hand-crafted Koa wood picnic hamper with saddle leather and 12-piece stainless steel cutlery set, a creation that took more than 500 hours to complete. In terms of finishing, the Koa Phantom is painted in Packard Blue paint to match Smith’s 1934 Packard Twelve Coupe. The paints are an exact match, and it’s quite a feat, really, considering that the Packard is nearly 80 years-old. The coachline is finished in Dove Grey, and Smith’s initials (JBS Jr) is found on the driver’s door. His wife’s initials (LAS) is found on the front passenger door.

Elsewhere, the cabin gets Dove Grey leather upholstery with Navy Blue highlights and piping, a bespoke handcrafted starlight headliner that consists of 1,420 fibre-optic lights on navy-blue leather (depicting the constellation of the night sky above Cleveland, Ohio, on Smith’s date of birth), Rolls-Royce monogram on the headrests, plus a Champagne fridge in the back that’s accompanied by a pair of crystal champagne flutes and decanter, engraved with Smith’s initials.

The Koa Phantom is the fifth Rolls-Royce model to join the JBS Collection of Jack Boyd Smith Jr, and it took Rolls-Royce a little over three years to complete the project.

“The Koa Phantom demonstrates the extraordinary skill of the Rolls-Royce Bespoke Collective – a precious and rare example of a naturally sourced material, Koa Wood, is masterfully incorporated into Phantom’s contemporary interior. It took more than three years for this commission to come to life and we are delighted that it will take an important place in The JBS Collection of Jack Boyd Smith Jr,” he added.