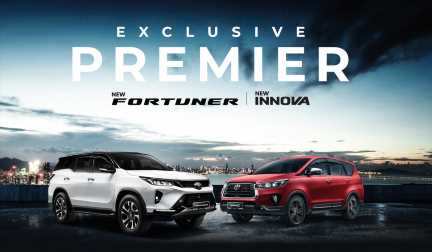 UMW Toyota Motor (UMWT) has announced that it will be officially launching the 2021 Toyota Fortuner facelift and 2021 Innova facelift on February 2, doing so online via Facebook or YouTube channel platforms. The live event will begin broadcast at 8.30pm.

Both models had their order books opened earlier this month. The Fortuner facelift, which was revealed in Thailand last year, will go on sale in three locally-assembled (CKD) variant forms, but the 2.4 AT 4×4 will be only be made available in Sabah, Sarawak and Labuan.

As for the 2.7 SRZ, it features the familiar 2TR-FE 2.7 litre naturally-aspirated four-cylinder petrol mill, which offers 166 PS and 245 Nm, while the East Malaysia-only 2.4 AT 4×4 is powered by the aforementioned 2GD-FTV 2.4 litre turbodiesel. All variants are equipped with a six-speed automatic transmission and part-time four-wheel drive system, but the 2.7 SRZ and 2.8 SRZ add on a rear automatic limited-slip differential.

Meanwhile, three variants of the Innova facelift, which made its debut in Indonesia last October, will be available in our market. The range starts with the base Innova 2.0E, which is priced at RM111,622. The next model is the 2.0G, which goes for RM121,483.

Finally, there is the range-topping 2.0X, which is priced at RM129,677. Again, all prices are on-the-road without insurance but with the sales tax exemption. There’s also a commercial (taxi) version of the 2.0E, and that is priced at RM97,978.

A single engine choice powers the entire Innova range, in this case the familiar 2.0 litre 2.0 litre 1TR-FE naturally-aspirated four-cylinder petrol engine. The unit offers 139 PS at 5,600 rpm and 183 Nm at 4,000 rpm, with power being sent to the rear wheels via a six-speed torque converter automatic transmission with sequential shifter.