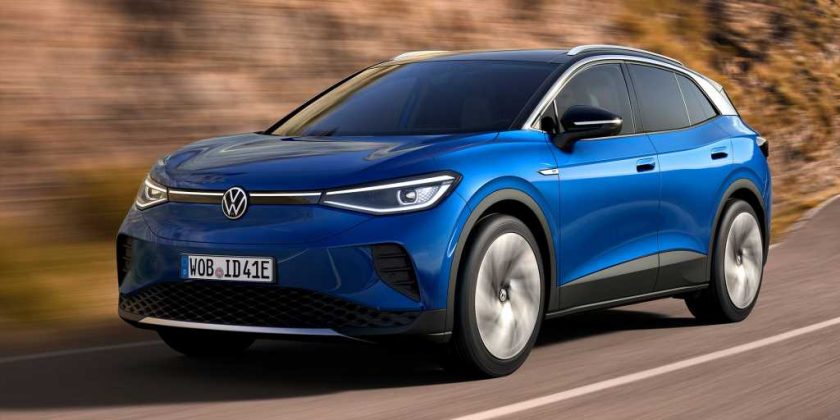 What a difference 15 years makes. When this author’s Audi S4 rolled off of the production line in February of 2005, efficiency, CO2 emissions, and miles per gallon were all secondary—or even tertiary—concerns to the big, naturally aspirated V-8 planted under its hood. In 2020, as we set off to drive a prototype version of the 2021 Volkswagen ID4, that little black S4 seems all the more a relic. The electric future we’re waiting for isn’t the future at all—it’s right here, right now. And that rungs especially true for Volkswagen, which is in the beginning of its full-bore push toward electrification, a strategy given a full-on rocket boost by the embarrassments and sanctions of Dieselgate.

That cheating scandal forced the company to clean up its act as much as possible, to commit to the electrified future sought by so many in Western governments, and to build a broad lineup of electric vehicles, including the very one we drove for this review. An SUV version of the not-for-America ID3 hatchback, the fully electric Volkswagen ID4 is perhaps the most important car VW has ever launched in the United States.

How the ID4 Stacks Up

Before we detail our experiences with a preproduction ID4, though, let’s take a quick glance at the competition—after all, electric SUVs are sprouting like weeds these days. At $39,995 before applicable federal and state tax incentives, the ID4 undercuts both the Tesla Model Y and Ford Mustang Mach E and offers more range than the base version of the Ford (250 miles to 230). A base Model Y is almost $10,000 more expensive, and even though it offers more range, some buyers might see that price gap as unbridgeable.

Once you move your eyes from the spec sheet and price tag, your gaze will turn to the physical vehicle itself. The ID4 doesn’t look like a large SUV from the outside, and it isn’t, being smaller than the current U.S.-spec Tiguan in every dimension. But it but once you open the doors and peer at the rear legroom, or slot yourself into the comfy faux-leather-covered driver’s seat and gaze over the expansive, clutter-free dashboard, the ID4 immediately feels a size bigger than its dimensions would imply. The seats are supportive and the driving position is ideal for a compact crossover—high without being lofty and making you feel as if you’re sitting on the thing rather than in it.

As for starting the ID4, you don’t. There is a start-stop button on the right side of the steering column, but the idea is you’ll rarely have to use it. Once the car senses you in the driver’s seat, it clicks itself on and is ready to go. Reach for the funky gear selector switch to the right of the digital driver’s display and give it a little upward twist to select “D” for drive and off you go.

Although the example we drove was a prototype model, Volkswagen insisted that it was representative of what customers will be getting. We believe it; from the moment we put our foot on the accelerator, the ID4 felt finished. As is the case with virtually all electric motors, response from the 201-hp, permanent-magnet synchronous unit mounted on the rear axle was instant, and the pedal response was perfectly linear. The more “throttle” you add, the more acceleration you get. Easy.

Pop it into Sport mode, and things get livelier. The accelerator pedal becomes more sensitive, and the steering weights up to signal intent without going wooden or overly heavy. This is how you’ll want to drive the ID4, as it banishes any whiffs of the overly light steering in many current conventionally powered VWs. Even though there’s nothing in the way of noticeable feedback, the steering is is wonderfully accurate and linear, so placing the ID4 in a corner or in a parking lot is a snap.

Among primary controls, the braking felt like the car’s weakest point, at least when used hard. As with nearly every other EV, most of the braking in almost all driving is handled via the regenerative system, the better to deliver otherwise wasted energy back into the system. Especially under aggressive braking, the pedal feels soft all the way through its travel before you finally activate the ABS of the friction brakes, making modulation difficult. While nearly all ID4 drivers won’t ever use the brakes this aggressively, an overall lack of feel will take nearly all of them some time to get used to. Indeed, we were often stabbing at the brakes too hard, inducing a lurching stop. While the ID4’s particular brake responses may end up being learned, there may be some refinement there yet to be had (especially in terms of pedal firmness) before the SUV hits dealerships.

Prior to our drive, VW’s PR arm was consistently pitching the ID4 as driving like a lifted GTI. Yeah right, we thought. How could the company have captured even a modicum of the GTI’s magic in an EV SUV? But they were something close to right, and all things considered, the ID4 is by quite some margin the best-driving Volkswagen SUV you can buy right now. But that’s not the only thing it does better than its gas-powered stablemates. In contrast to, say, the Volkswagen Atlas we tested earlier this year, the ID4’s buttoned-down and supple ride is a revelation. The big three-row Atlas SUV simply never settles down, but small surface imperfections in don’t upset the ID4 at all, and even large undulations revealed excellent body control. Larger impacts would occasionally deliver a big thump through the seat bottom, but we attribute some of that to this car’s 20-inch wheels and shorter tire sidewalls. VW ID4 First Edition models and those with the $4,500 optional Statement package will get 20s, but standard ID4s sit on 19s.

We didn’t get to try a version on the 19-inch wheels, but we’re assuming that the ride would be marginally better with more sidewall and less unsprung weight. Volkswagen also says that specifying the bigger rollers sacrifices something like 5 miles of range. But beyond the impact noise, there was hardly anything to hear inside the ID4 save for the purr of the electric motors and the nearly inaudible whoosh of the air conditioning at full blast. In that way, this EV has a refined feel.

The charming, minimalist look of the interior can also be described as refined, but the cabin designers’ decided to use capacitive touch controls for almost everything, resulting in tricky-to-learn and occasionally imprecise ergonomics. None of the touch-sensitive buttons provide haptic feedback (save for those on the steering-wheel spokes), so being precise with your taps is difficult. Trying to activate the climate controls or use the drive-mode selector was arduous, and the buttons simply didn’t register our touches with accuracy or the proper sensitivity.

Yes, Tesla buries nearly everything in a digital interface, but it’s not the easiest way to use a car, trendy though it may be, and some automakers who switched to capacitive controls are at the moment unwinding that decision. The ID4 might seem “less futuristic” with more physical buttons, but top-level functions should be easy to use, period, and physical controls are a less anodyne way to experience the interior of a car—touch buttons add nothing to the experience. The ID4’s cabin is a nice place to be, but—well, read our hands-on interior review for more.

As for the range, we were driving the car hard enough during our brief drive that in-depth commentary—beyond to say we at one point used 44 miles of indicated range to traverse 38 miles—wouldn’t be in order. We drove somewhat hard to get a feel for the ride and handling, which is never the path to range enlightenment. For those predisposed to range anxiety, though, there is a “B” driving mode on the gear selector, which increases the brake-energy recuperation in a bid to help maintain—or even gain—some range in, say, stop-and-go traffic or while descending a mountain road without negatively affecting the driving experience. In may ways, “B” stands for “Best Way to Drive It.”

Because aside from being good to drive, at least in this early form, the ID4 is an attention-getter. Maybe it’s because no one’s seen one on the road yet, or maybe it’s because it represents a fresh aesthetic for VW, but we received thumbs-up from multiple pedestrians, and a man in a 911 Turbo S dropped his shades to get a better look at the shiny new EV next to him at a red light. It seems that the ID4 is pretty good at first impressions.