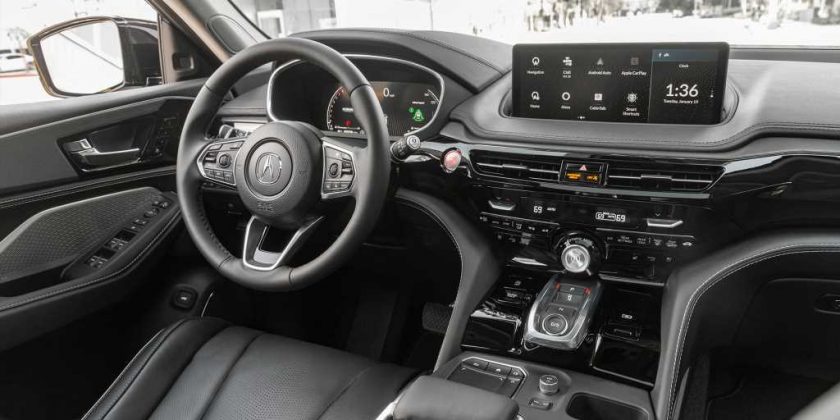 First and foremost, know that the redesigned 2022 Acura MDX’s interior is a big improvement from the outgoing model. That SUV’s nice-for-a-Honda aesthetic and dual-screen infotainment setup were decidedly 2014. Not so for the new MDX, which takes on a distinctive, modern ambiance with more technology than any Acura before.

But that the MDX has outdone itself is no surprise—the real question is whether its cabin rivals other luxury three-row SUVs. Does it? Short answer: Even in the range-topping Advance model we drove, no. Long answer: Read on.

Let’s start at the back. Pop the powered tailgate to find a 16.3-cubic-foot cargo area, slightly larger than the one in the previous MDX. There’s also a wide underfloor storage bin with a removable, flippable cover. On one side the cover is carpeted; on the other, it’s hard plastic so dirty cargo doesn’t soil the upholstery. Other conveniences include a small deployable bag hook, a 12-volt power outlet, and a one-touch close and lock button.

Cargo capacity increases to 39.1 and 71.4 cubic feet behind the second and first rows, respectively. This MDX may be new, but its seats still fold the old-fashioned way: manually and individually. Whereas some three-row competitors offer powered rear seats, the MDX relies on levers and buttons. Tried and true those may be, but there are times when hitting a switch and letting motors do the work would be a saving grace the MDX can’t provide.

The rearmost seats are less confining than before, with headroom increased by 0.6 inch to 36.2 inches and legroom by 2.4 inches to 29.0 inches. Those dimensions remain best for kids, but adults could fit in a pinch, especially if the second-row occupants are generous enough to scooch their seats forward. However, the third-row chairs feel flat and narrow, limitations of their folding capability and the vehicle’s rear structure.

Third-row riders don’t get trim or amenities much beyond the basics. Besides cupholders, there are floor-mounted air vents and ear-height speakers. Only the Advance trim has rear USB ports—on others, occupants will need a cable long enough to reach to the second row.

Moving up, the second-row seats have 38.1 inches of headroom and 38.5 inches of legroom, measurements within a tenth of an inch of the outgoing MDX. Like the ones behind them, the middle chairs have minimal bolstering, a trade-off for their flat-folding capability. Yet a sense of openness is aided by the huge panoramic moonroof and door windows, the latter of which have retractable sunshades on all trim levels above the base.

New for the MDX’s second row is a multifunction middle seat. Put it upright for someone to sit in, fold it down for an armrest with cupholders, or remove it entirely. Taking it out is easy, and this provides another method of third-row access. But that leaves unsightly mounting brackets exposed, a ding against the MDX’s luxurious aims.

Second-row amenities include two USB-A ports, a 12-volt outlet, and automatic climate control. The Advance trim adds an AC plug and outboard seat heating. These are all nice to have but not different from what’s available in three-row SUVs across the spectrum. Add in the abundance of hard-wearing materials, and the MDX’s second row feels more functional than upscale. A captain’s chair setup like was offered previously would help it feel more like a true luxury SUV.

Unlike the somewhat lackluster rear seats, the MDX’s front row is pretty sweet. The seats are excellent; they’re nicely bolstered, comfortably padded, and power adjustable in no fewer than 12 directions. Although 38.5 inches of headroom and 41.6 inches of legroom are increases of less than half an inch over the previous MDX, the steering column tilts and telescopes 50 percent more to help people short or tall find an ergonomic driving position. Three-level seat heating is standard, with seat ventilation and automatic climate control added on A-Spec and Advance models. The steering wheel, smaller in diameter and with a thicker rim than before, feels great—especially when it’s heated, a perk exclusive to the MDX Advance trim.

Like in the TLX sedan, the new MDX’s dashboard looks sharp. It’s modish and unique, with high-quality wood, metal, and stitched leather everywhere. Although there’s a bunch of buttons on the dashboard and steering wheel, their layout is logical and ergonomic. Acura’s signature push-button gear selector quickly becomes second nature. A particularly fun addition is the ambient lighting on all trim levels above the base, which has 27 color themes named after famous roads and locales. There are other enjoyable little touches—check out how the arrows illuminate with each press of the temperature toggle, or listen for unique chimes when switching between drive modes.

Some quirks remain. The pop-up USB ports hide out of sight when not in use—but isn’t using them the point? There seems to be space for them elsewhere on the dash, outside of an enclosure that could attract debris between its seams. On the center console wrist rest, padded upholstery only covers the top, leaving exposed screws underneath. Behind it, lots of space is devoted to a wireless charging pad. It’s wasted on those who have a case on their phone or don’t mind plugging in. If only the bin under the armrest hadn’t been made so small for it. The half-size, cheap-feeling paddle shifters and strangely noisy side window motors are other un-luxurious foibles.

Between the 12.3-inch gauge cluster and infotainment displays—both standard across the range—the MDX is adorned with literal feet of digital real estate. Yet, Acura’s True Touchpad infotainment interface, which relies on a trackpad instead of a touchscreen, remains in need of improvement. Like in other Acuras, it requires finesse, patience, and too much focus away from the road. That the entire right third of the screen is devoted to basic redundant information, all controlled by its own smaller trackpad, seems like suboptimal design. At least wireless Apple CarPlay and Android Auto work consistently, and the Advance model’s 16-speaker ELS Studio 3D audio system sounds fantastic.

Acura’s first all-digital gauge cluster, dubbed Precision Cockpit, earns higher praise. It’s bright, crisp, and clear, with slick graphics and animations. Driver assist system status, SH-AWD torque split, and real-time fuel efficiency are only a few of the data points it can show, but hopefully future over-the-air updates will add capability and customization. A full-screen map or more distinctive layouts for various drive modes would put it among the best digital gauge clusters, but it’s not quite there yet.

Although undoubtedly improved over the last MDX, the 2022 model’s interior lacks the completeness of other luxury three-row SUVs. For as nice as its first row is, the seats behind feel utilitarian. Depending on the buyer, that may not necessarily be an issue. Family drivers might appreciate the tough-built materials and straightforward approach. But for them, absent features like power-folding seats or standard third-row USB ports seem like obvious omissions. Against three-row SUVs with improved premium appeal, the MDX hardly distinguishes itself.

For drivers who want a luxury SUV as a posh conveyance for themselves and some friends, the MDX’s interior lacks panache. It’s not a cabin in which to welcome guests to sprawl out or woo with indulgent features and trimmings. Potential future inclusions like second-row captain’s chairs could help change that, but until then the MDX doesn’t have the, well, luxury to keep it in contention against other luxury three-row SUVs.