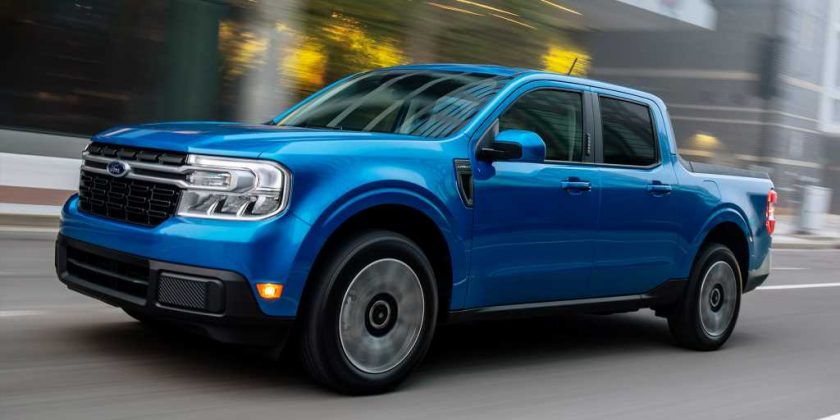 We’re rolling along a Tennessee road in the all-new 2022 ford maverick when we pull up behind a beat-up, ’90s-era Ford Ranger. One quick glance and it’s easy to see how much bigger the Maverick is than the Ranger. Ah, but the Ranger is a body-on-frame design, what some would call a true truck. In the end, it’s all relative. There’s a new-generation Ranger, and it’s more than 10 inches longer than the unibody-architecture Maverick, while the latter can easily do as many truck things as that battle-scarred Ranger ever could.

Plenty of Power—and It Handles, Too

Our first stint bopping around Nashville and environs, where trucks are as thick as the molasses used for select Tennessee whiskies, was in a base 2022 Maverick XL. It had front-wheel drive and the Maverick’s optional 2.0-liter EcoBoost turbo inline-four with 250 horsepower and 277 lb-ft of torque mated to an eight-speed automatic transmission. Mash the accelerator pedal to the floor, and it takes a beat or two to get to the powerband, but when it does, the front 17-inch painted steel rims shod with 225/65 tires start chirping, the traction control light flickers, and the engine’s muted chainsaw crescendo reaches toward its coda. Yep, the 2.0-liter makes more than enough power to motivate the roughly 3,600-pound Maverick.

When it gets up to normal cruising speeds, the Maverick, which is based on Ford’s C2 platform that also underpins the Escape and Bronco Sport compact crossovers, is as easy to drive as those models. It tracks straight, and although there’s a slight dead spot in the wheel when you turn in aggressively, this small truck’s electric power-assisted steering feel is otherwise as firm at speed as it is light in tight, low-speed maneuvers. Over pavement bumps and bruises, the base Maverick’s suspension—which incorporates struts up front and a twist-beam rear axle with integrated stabilizer bar, as well as Ford’s own force vectoring springs—soaks up the easier imperfections without much fuss, though things got noticeably harsher over some of the rougher stuff.

The Maverick Hybrid Is Efficient

At the midway point of the drive, we stopped at a distillery, because when in Rome. There, we had a chance to step into a higher-spec, XLT trim of the 2022 Maverick with its standard hybrid powertrain, a 2.5-liter inline-four with 162 hp and 155 lb-ft and permanent-magnet electric traction motor combo that produces a total system horsepower of 191 horses. It pairs with a continuously variable transmission. Unless you need all-wheel drive or the ability to tow more than 2,000 pounds in your Maverick (all Mavericks have a max 1,500-pound payload capacity, but the 4,000-pound tow package is only available on 2.0-liter models), save yourself the $1,085 and go with the hybrid.

Power delivery is far more linear than the front-drive turbo truck, with a simple power gauge that gradually surges to show 100 percent power under full throttle and holds there as you keep it matted. Back off at cruising speeds or slowly move away from a stop, and the Maverick can motivate under electric power only depending on its charge state. Although it hasn’t been officially EPA rated yet, Ford is boasting as much as 40 mpg city for the 2022 Maverick hybrid, with a 500-plus mile range. We saw an indicated 43.8 mpg on the instant readout during part of the drive, and mid- to high 30s when we were driving hard on a picturesque stretch of the gently winding Natchez Trace Parkway (yes, the Maverick can handle pretty well, too). You’re not going to be giving up a whole lot over the turbo-four in the acceleration department, and what you get in return is substantial.

It Does Truck Things

Of course, if you want your Maverick to ride a bit better or do trucky stuff like get busy off-road or tow more poundage, you’re going to need the nonhybrid 2.0-liter’s extra capability. All-wheel-drive Mavericks are fitted with an independent rear suspension, which we found to be more compliant over the rough stuff, especially so with the available Falken Wildpeak tire package. The optional 4,000-pound towing package ($745) beefs up the radiator and cooling fan and adds a receiver with a seven-pin connector, among other enhancements. We had a chance to take a couple of Mavericks hooked up with trailers out for a quick run, and as expected, there were zero issues hauling with either the hybrid or the beefed-up all-wheel-drive models. Whether braking with a trailer or without, hybrid or turbo, the Maverick also slows down with ease in most situations and with force when necessary.

If we had a nickel for every time a Ford official at the drive event worked the catchphrase “Built Ford Tough” into a take on the Maverick, we would have probably had enough for a Maverick FX4 ($800 for the package), which is the most trail-capable model. Ford sectioned off a short off-road course for us to rip around in an FX4, which is only available on the XLT or the top-tier, leather-lined, and luxury-themed Lariat trim and comes with most of the same extra gear as the 4,000-pound towing package. We slid its skidplates over some rocks and bounded down two-tracks with the Wildpeaks clawing away, and we wished we had more trails to attack, as the fun run was far too short. Based on what we did do, the Maverick FX4 seemed plenty tough to us.

While our early exposure indicates that this compact pickup is built as well as any other Blue Oval truck, it’s also clear Ford is hoping the Maverick will attract new customers to the brand that aren’t your typical truck buyers (read: young, hip, and not exactly rolling in dough). For one, there’s the price. We drove two Mavericks, one hybrid and one with the turbo-four, that both were less than $24,000 all in. Yes, they were base trucks, but we love those painted steelies.

Inside, the cabin of every Maverick holds all manner of water bottles, tablets, phones, change, and more in various cubbies, plus other assorted gear under the rear seats. In other words, the stuff active, on-the-go types use. It’s also been designed with a “plastic with personality” approach that employs varied textures and geometric patterns, and of course, the requisite Apple CarPlay and Android Auto are available to display on the 8.0-inch infotainment screen. However, we weren’t exactly thrilled with the seats. They weren’t the most comfortable, and we wonder how well they’d support occupants over a long trip.

In the back seat, while there’s room for three on the bench, legroom is at a premium, and we would have liked to see USB ports as standard equipment in the rear on all trim levels. On the plus side, there’s the FITS (Ford Integrated Tether System) slots for various accessories, like a trash can. In front, you have plenty of room to spread out thanks in part to the lower placement of the dial gear selector and central tunnel stowage areas.

Doing It Yourself With Flexbed

Then there’s the DIY aspect of what Ford’s doing with Maverick, a novel idea with real creativity we’ve rarely seen from an automaker. Like actually showing people on YouTube how to create a bike rack from 2x4s in the 4.5-foot-long bed, which Ford has dubbed Flexbed. You can hack up light banks or install an air compressor using the built-in electrical connection points. The bed can haul 4×8 sheets of plywood, has multiple storage areas and as many as 10 tie-down points, and the tailgate can tilt to help keep gear in place or support longer items (or you can get the bed extender). There’s more to come for those looking to do it themselves, such as the ability to 3-D-print FITS accessories, and of course Ford has a load of official gear coming (150 accessories at launch), including a factory bed cap and much more.

Whatever your view is on what makes a truck a “real” truck—small, unibody, or otherwise—Ford’s new Maverick is helping to redefine what a compact pickup is in the modern era. As it has for generations in the mid- and full-size arenas, Ford is determined to lead in the space, and based on this experience behind the wheel of the Maverick, the Blue Oval appears to be off to a solid start.