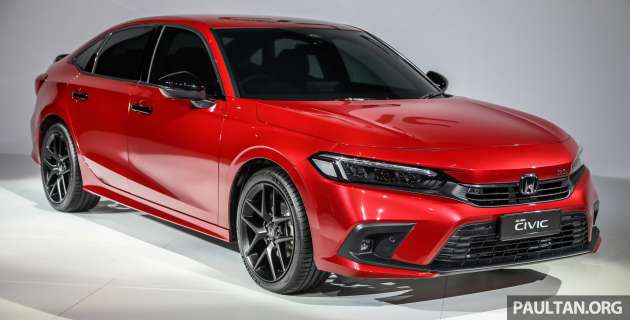 This is it – Honda Malaysia has launched the new Civic at the Malaysia International Trade and Exhibition Centre (MITEC) today. The 11th-generation model, codenamed FE, has big shoes to fill as it replaces the swoopy FC that remains hugely popular to this day.

Let’s start with the most important bit of today’s announcement out of the way first, which is the price. As before, the Civic is available in three variants, with the base E kicking off proceedings at RM125,635. The V comes next at RM138,043, while the new RS model tops out at RM144,350. Those are significant increases of RM16,308, RM12,962 and RM9,689 over the respective FC variants.

All prices are on-the-road without insurance, inclusive of the government’s sales and service tax (SST) rebate that is valid until June 30. Each purchase comes with a five-year, unlimited-mileage warranty and five times free labour for servicing, as is always the case for Honda Malaysia.

The company has received around 1,200 bookings since the order books were opened last month and is expecting to sell around 900 units per month. Deliveries will kick off next week, with waiting times expected to be between one and two months depending on the variant.

For the first time, all variants are powered by the 1.5 litre VTEC Turbo four-cylinder engine. Enhanced with Variable Valve Timing and Lift Electronic Control (yes, actual VTEC), optimised turbocharger components for improved response and a revised crankshaft and oil pan for increased refinement, it pushes out 182 PS at 6,000 rpm and 240 Nm of torque from 1,700 to 4,500 rpm – increases of 8 PS and 20 Nm. Fuel consumption is rated at 6.0 litres per 100 km for the E and V and 6.3 litres per 100 km for the RS.

The CVT continues to be standard fitment, offering seven virtual ratios and paddle shifters starting with the V variant. Honda says it has done some serious software calibration work for better responsiveness, conducting extensive testing in the United States and United Kingdom. The V and RS also feature a drive mode selector with Eco, Normal and Sport settings that adjust the throttle and CVT mapping.

I’m sure you’ve already seen the styling and made up your mind about it, so here’s the Cliff Notes version. The FE has a cleaner, more mature design with straighter body lines and the ditching of the FC’s characteristic “Solid Wing Face” front bar and C-shaped taillights. In their place are a slimmer grille and headlight combination, Audi-like trapezoidal LED taillights and A-pillars that have been pushed back by 50 mm for more “premium” proportions. The FC’s characteristic C-pillar kink remains, however. 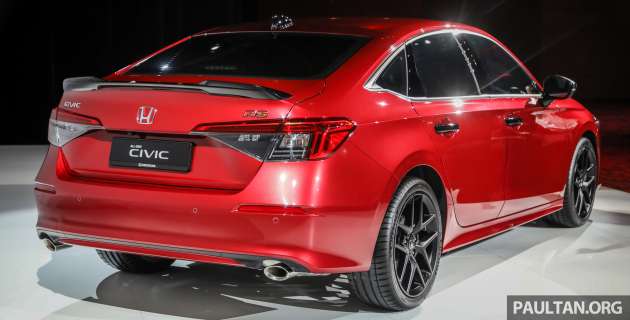 On the outside, the Civic now comes as standard with automatic LED headlights and rides on two-tone 16-inch alloy wheels, although front fog lights have been dropped here. The latter gets optioned back in with the V, which also throws on 17-inch alloys (these are the two-tone versions of the rollers offered on the RS model in Thailand) and chrome door handle accents.

Our RS gets upsized 18-inch matte black alloys in the same handsome Y-spoke design offered in the US and Japan. Also unique to the sportier-looking range-topper are darkened headlight internals, a gloss black rear spoiler, visible twin tailpipes and gloss black highlights – the latter can be found on the wing mirrors, door handles and shark fin antenna. The window trim is also finished in matte black.

Against the measuring tape, the new Civic is 4,678 mm long, 1,802 mm wide and 1,415 mm tall, making it 30 mm longer, three millimetres wider and one millimetre lower than before; its 2,733 mm wheelbase is also 33 mm longer. Honda says that the latter has allowed the rear seats to be more reclined than before, improving passenger comfort. The boot measures 497 litres, which is quite a bit smaller than the old car’s 519 litres.

Step inside and you’ll find a more upscale cabin than the outgoing model, sporting a clean horizontal dashboard, a freestanding infotainment touchscreen and full-width air vents with a honeycomb metal mesh cover. The company promises improved material and switchgear quality in concert with the more upmarket look, as well as increased visibility thanks to the repositioned A-pillars.

All new Civics come with Honda’s OEM Display Audio infotainment system. The E variant is equipped with a seven-inch touchscreen that supports Apple CarPlay and Android Auto, while the V and RS models upgrade to a nine-inch unit that adds wireless CarPlay support. The standard speaker count has dropped from six to four, but the V and RS get bumped up to eight speakers, including four tweeters.

Elsewhere, the seats have been redesigned to improve comfort and support, but in return you lose the powered driver’s seat adjustment that was previously offered as standard. This feature is only fitted on the V and RS models, which also add on leather upholstery (combined with suede and red stitching on the RS). There are a number of other RS-specific touches, including alloy pedals, a black headliner, footwell lighting and ambient lighting strips integrated into the gloss black door trims. 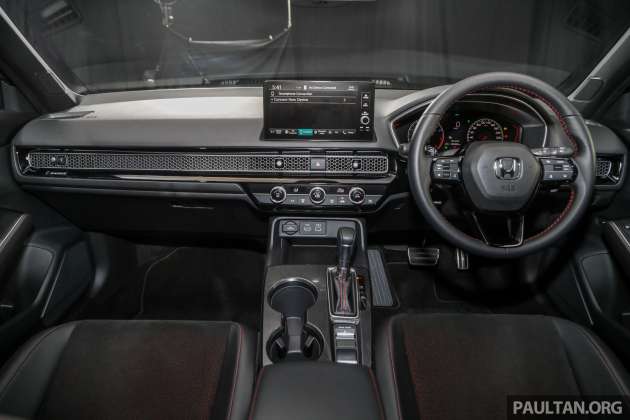 Standard kit continues to include keyless entry (with walkaway auto-lock and remote engine start), push-button start, a seven-inch digital instrument display (paired with an analogue speedometer), single-zone automatic climate control with rear vents and a reverse camera. New features include windshield washers integrated into the wipers and a spring-loaded bootlid for easy opening (no hands-free function, however).

Step up to the V variant and you’ll receive the Honda Connect suite of telematic services, an auto-dimming rear-view mirror and illuminated vanity mirrors, while the RS adds automatic wipers. Unfortunately, the previously offered dual-zone climate control is nowhere to be found here – not even on the top RS model.

These omissions can be easily forgiven, however, because safety is where the new Civic has been given the biggest upgrade. Yes, the car now comes as standard with the Honda Sensing suite of driver assistance systems, including autonomous emergency braking, adaptive cruise control with stop and go, lane centring assist, lane keeping assist and automatic high beam.

New for the FE is a Lead Car Departure Notification System, which alerts the driver if the car in front is moving off from a stop. As before, the Civic comes with six airbags, stability control and an electronic parking brake with auto brake hold. Honda’s LaneWatch blind spot camera is also fitted to the V and RS.

Honda is promising some improvements under the skin, including a stiffer body structure, increased sound insulation and a retuned chassis aimed at delivering a better ride and handling balance. An Agile Handling Assist (AHA) function has also been added, braking individual wheels to reduce understeer in the corners. Want to know how the new Honda Civic drives? Read our first impressions review here.

The new Civic will be offered in five colours, including the new Meteoroid Grey Metallic and Ignite Red Metallic. The other available hues are Lunar Silver Metallic, Crystal Black Pearl and Platinum White Pearl, the latter costing an extra RM300. Browse full specifications and equipment on CarBase.my.