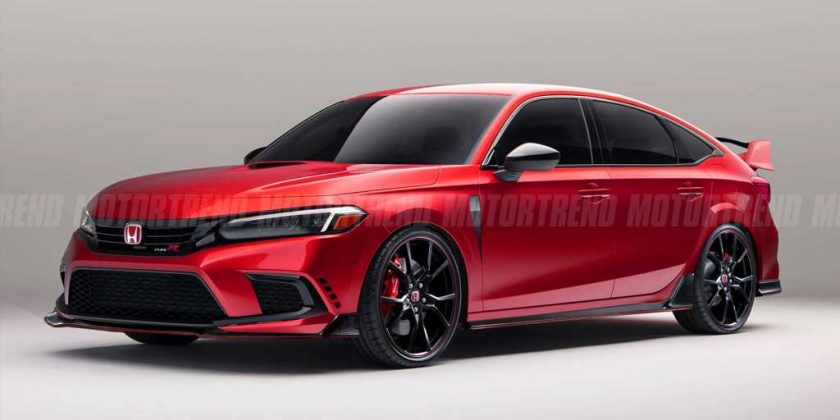 There’s no denying the current Honda Civic Type R is a tough act to follow. Having won multiple comparison tests and an astonishing 4th–place finish in our 2018 Best Driver’s Car competition, the Type R is a front-drive performance miracle that audaciously takes all comers—no matter the opponents’ specs or price point. So how could the hot hatchback possibly get any better? With the reveal of the 2022 Honda Civic Prototype, we have reason to believe Honda will pull off another performance magic trick with the 11th-gen-Civic-based Type R. Here’s what we know so far about the upcoming 2022 Honda Civic Type R.

The 11th-generation Honda Civic rides on a new platform evolved from the outgoing Civic’s bones. This new global Civic platform is stiffer than its predecessor, and that extra rigidity will benefit all Civic models—including the Type R. Having a stiffer chassis should raise the performance limits of the upcoming Honda Civic Type R, as a strong basis for the suspension to do its work is critical. The Type R will again be offered as a hatchback only, and along with all other Civic Hatchback models, is currently produced at Honda’s plant in Swindon, U.K., which is set to close in 2021. However, Honda has said hatchback production will be saved and move to its Indiana plant in the U.S.

The 11th-generation Civic is nearly the same size as the outgoing car but has a slightly longer wheelbase and wider rear track. Honda says the standard 2022 Civic will receive suspension upgrades to give it more sophisticated (yet still sporty) ride and handling characteristics. In line with the 2022 Honda Civic Prototype’s more mature overall vibe, we expect the new Civic Type R to grow up slightly as well, possibly offering an even more refined ride. For 2020, the Civic Type R received an upgraded adaptive suspension that can adjust its dampers more than 20 times per second, dramatically improving the car’s ride quality on the street. At the same time, suspension geometry was altered, bushings were stiffened, and ball joints were upgraded with lower-friction parts, resulting in a car with sharper turn-in, less body roll, and more lateral grip—all at no cost to its daily drivability.

Honda has been mum on engine details for the 11th-gen Civic family, but the automaker has committed to offering a six-speed manual transmission on its sporty models, including the hatchback, Si sedan, and Type R. Beyond that, however, we don’t know much about the next-gen Type R’s drivetrain. We’re big fans of the current model’s turbocharged 2.0-liter inline-four, which makes 306 hp and 295 lb-ft of torque, so an upgraded version of that engine would be just fine by us. If Honda does go that route and retain the Type R’s front-wheel-drive layout, we think bumping up to 320 hp would be a reasonable increase without overwhelming the front tires.

But there is one rumor that suggests the next Civic Type R could go in a completely different direction. A story from Japanese publication Best Car suggests the new Type R could adopt a hybrid all-wheel-drive system like the one used in the Acura NSX. That kind of hardware would make possible a total output of 400 hp, along with rear-axle torque vectoring. It would also place the Type R in a different performance category and likely raise its price significantly. Honda won’t comment on the report being that it’s pure speculation, and we think a performance hybrid strategy would go against the Type R’s purist ethos as it adds weight and complexity. If anything, we’d bet on the 2022 Honda Civic Type R losing weight—something it can’t do by adding electric motors and an extra battery.

Despite how well it drives, there are many who just can’t get behind the Honda Civic Type R simply because of how it looks. The styling of the current car can be described as boy racer-chic, with its large rear wing, vent-laden front and rear bumpers, and bright red Honda badges. Its interior isn’t any more mature, packed with red accents and faux carbon-fiber trim. Aesthetically, the car is busy, to say the least.

To detractors of the outgoing Type R’s looks, we say get over it—or go drive the thing. However, if you’ve been hoping for a subtler approach for the hot hatch’s next iteration, you’re in luck. The 2022 Honda Civic Prototype not only previews the 11th-gen Civic sedan, it also features styling cues that we’ll see on hatchback models, including the Type R. The concept boasts clean lines and a sporty stance without resorting to the huge fake vents and crazed surfacing that afflict even non-Type-R 10th-gen Civics. Inside, the new Civic adopts a similarly toned-down design with a simplified center stack and free-standing central touchscreen. The instrument cluster is also tidier now that it’s all digital. You can expect this more subdued and upscale look to carry over when the 2022 Civic finally gets the Type R treatment.

The 2022 Honda Civic sedan is set for a late spring 2021 launch. Based on that timing, we could see the hatchback by summer and the Type R as early as next fall. As for pricing, that will depend on which path Honda chooses for the Type R. A hybrid AWD variant could push the model’s price tag well beyond $40,000. If Honda decides to stick with FWD, on the other hand, pricing should increase only slightly, keeping it in the $38,000-40,000 range. That’s the price point where we think the Civic Type R is most strongly positioned, and where it shines as a performance bargain.