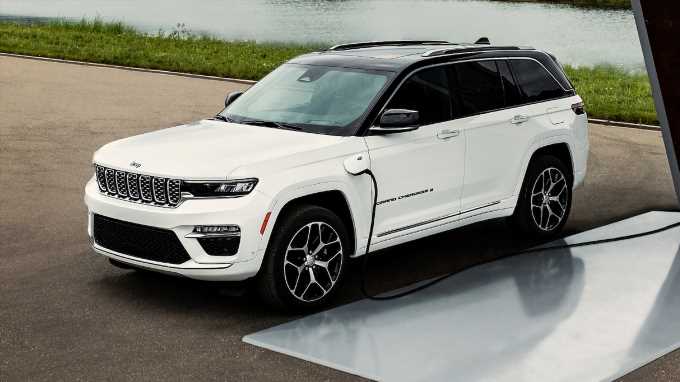 You’ve already seen the 2021 Jeep Grand Cherokee L, the first in its line with that all-important third row. But the bigger Grand Cherokee also serves as a preview of the SUV you’re looking at now: the shorter two-row 2022 Grand Cherokee. It shares a design with the slick-looking 2021 Grand Cherokee L, but it’s a wee bit stubbier. And, if the solar-enhanced charger it’s plugged into isn’t a big hint, it’s also available as a plug-in hybrid (or 4xe in Jeep-speak).

The grille and headlights appear unchanged from the L, but the detailing looks slightly different on this 4xe model. Additionally, there appears to be an extra chrome element under the lamps that reside within the SUV’s lower fascia.

What will power the Grand Cherokee 4xe? The Wrangler 4xe’s stout gasoline-electric hybrid powertrain is the likely suspect. Its total system output comes in at a very healthy 375 hp and 470 lb-ft of torque, which is more than the 5.7-liter V-8 that powers the current Grand Cherokee pumps out. But we should note that any of Stellantis’ eTorque-equipped engines could theoretically get the PHEV treatment and subsequently power Jeep’s gasoline-electric midsize SUV. Regardless, expect more details to emerge about the 2022 Grand Cherokee model line as we get closer to its formal debut in New York.