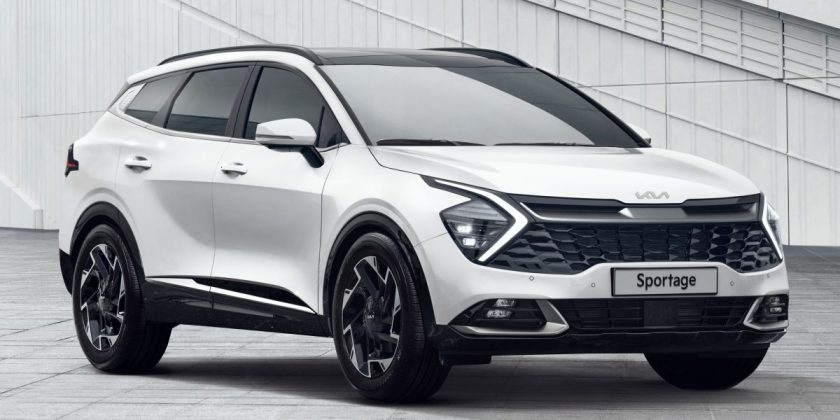 Here on the Sportage, the front end of the SUV features the latest iteration of the brand’s Tiger Nose grille design, now bookended by “boomerang-shaped” LED DRLs which serve has boundary lines for the headlamps, says Kia. At the top, the option of a contrasting black-painted roof is available on the Sportage for the first time, joined by black roof rails.

Further down the glasshouse, a chrome stripe runs the length of the base of the glasshouse, kicking up towards the rear end and forming part of its D-pillar. At its rear end, the Sportage wears tail lamps featuring main graphics that echo those of the boomerang-shaped design of the front LED DRLs, and the tail lamp assembly is joined across the tailgate near the base of the rear windscreen. Inside, the interior of the fifth-generation Sportage gets redesigned to become a more driver-oriented space, says Kia, with the integrated curved display taking centrestage on the dashboard. This is located between air-conditioning vents that almost enclose the height of the display housing, which can be accessed via the touchscreen as well as with the integrated controller on the centre console.

The centre console also offers a storage compartment at the front, while a pair of cupholders are located on the passenger side of the console alongside the shift-by-wire transmission dial. For added convenience, the slim-shell design driver and front passenger seats feature integrated hangers within their headrests, which will enable items such as clothing and handbags to be hooked into place, says Kia. There will be an X-Line trim variant for the fifth-generation Sportage line-up, which will sport a unique bumper, side sill and curve roof rack, according to the manufacturer. Interior for this variant can be specified seat upholstery in black or sage green, along with quilting and “black metal wood” to set it apart from its rangemates.

Technical details have yet to be revealed with unveiling of the fifth-generation Sportage, although Kia has previously described its forthcoming range of engines as “highly efficient powertrains”, which are likely to be comprised of hybrid as well as plug-in hybrid configurations.

Drawing upon the 2022 Tucson from sister brand Hyundai for comparison, these powertrain options could be the 1.6 litre turbo petrol engine paired to a six-speed automatic transmission, where outputs are 226 hp and 350 Nm of torque in hybrid guise which employs a 1.49 kWh battery for a total range of up to 800 km, while the plug-in hybrid version enlists a 13.8 kWh battery pack for a pure EV range of 45 km.

The fifth-generation Kia Sportage will see its global market launch later year, according to the manufacturer, and more information of the new SUV will be made available in due course, says Kia.