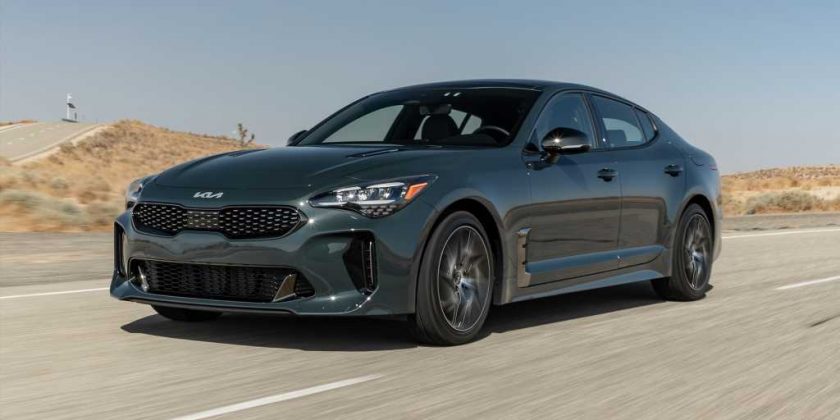 When Kia brought the Stinger five-passenger sport sedan to compete for the 2018 MotorTrend Car of the Year award, we were delighted with its capability, but the lineup suffered from an underpowered base engine.

The Stinger is back to address that complaint with a new 2.5-liter I-4 that puts out 300 hp and 311 lb-ft of torque. The power output represents an impressive 45-hp hike over the 2.0-liter turbocharged four-cylinder it replaces, and the new mill is more fuel efficient.

Like its more luxurious Genesis G70 counterpart, the Stinger is a rear-drive car, and we appreciate its fun dynamics. You may also opt for the more powerful carryover 3.3-liter twin-turbo V-6, and the Stinger also has available all-wheel drive with torque vectoring. However, our testing this time around was limited to the new entry GT-Line model with rear-wheel drive.

Judges appreciated the new base engine’s additional output. Digital director Erik Johnson liked the smooth and flexible powerband but not the accompanying soundtrack. Overall, we were divided on the sound; some liked it, but others said it was grainy and coarse.

Most judges decried the overeager stability control, which can’t be turned off fully and cuts in when the chassis is about to shine. Depriving a rear-drive car of the ability to hang its tail out is a glaring oversight, senior editor Conner Golden said. In the eyes of road test editor Chris Walton, this trait makes the Stinger more of a grand tourer than sport sedan.

But technical director Frank Markus still had a ball on the winding track in Sport mode, enjoying some mild slides through the turns. He was equally impressed with how the car handled the obstacles on the proving ground’s rough road portion. Deputy editor Alex Stoklosa said Kia seems to have improved the suspension’s rebound damping, which was an issue on earlier Stingers. The midcycle refresh also brought new looks and a Stinger Scorpion Special Edition model, which we fear is a parting shot for a car on the verge of being discontinued.

Inside is a larger 10.3-inch infotainment screen, a big improvement over the previous 8.0-incher. The rear seat is decently roomy, with air vents, USB, and power outlets. But there is also a disappointing amount of black plastic.

The 2022 model adds a 360-degree camera and blind-spot monitor; we were surprised these weren’t already available. Overall, the car “has a superb safety rating,” buyer’s guide director Zach Gale said.

At least one judge wished this base engine had been available at launch, before the base price started to climb. “If the Stinger GT had this 300-hp turbo I-4 from the start—and at the low $30,000 introductory price—the Stinger might have been more successful,” guest judge Chris Theodore said. He then went one step further and claimed he might have bought one if that had been the case. But today, at $39,715, our test model with the base engine won’t get him to open his wallet.

View every 2022 Car of the Year contender here