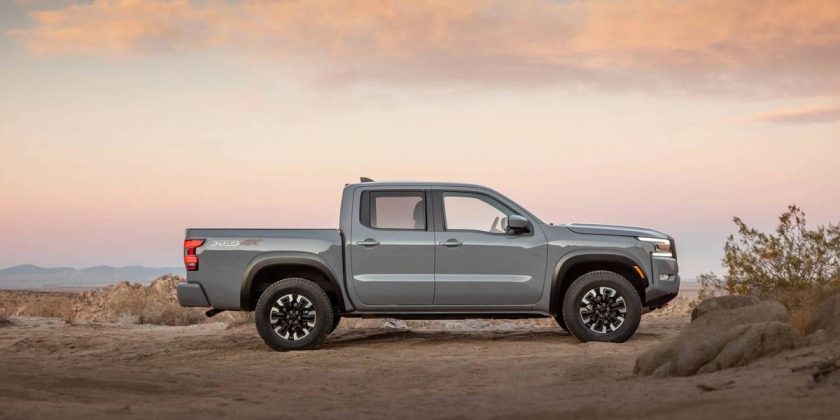 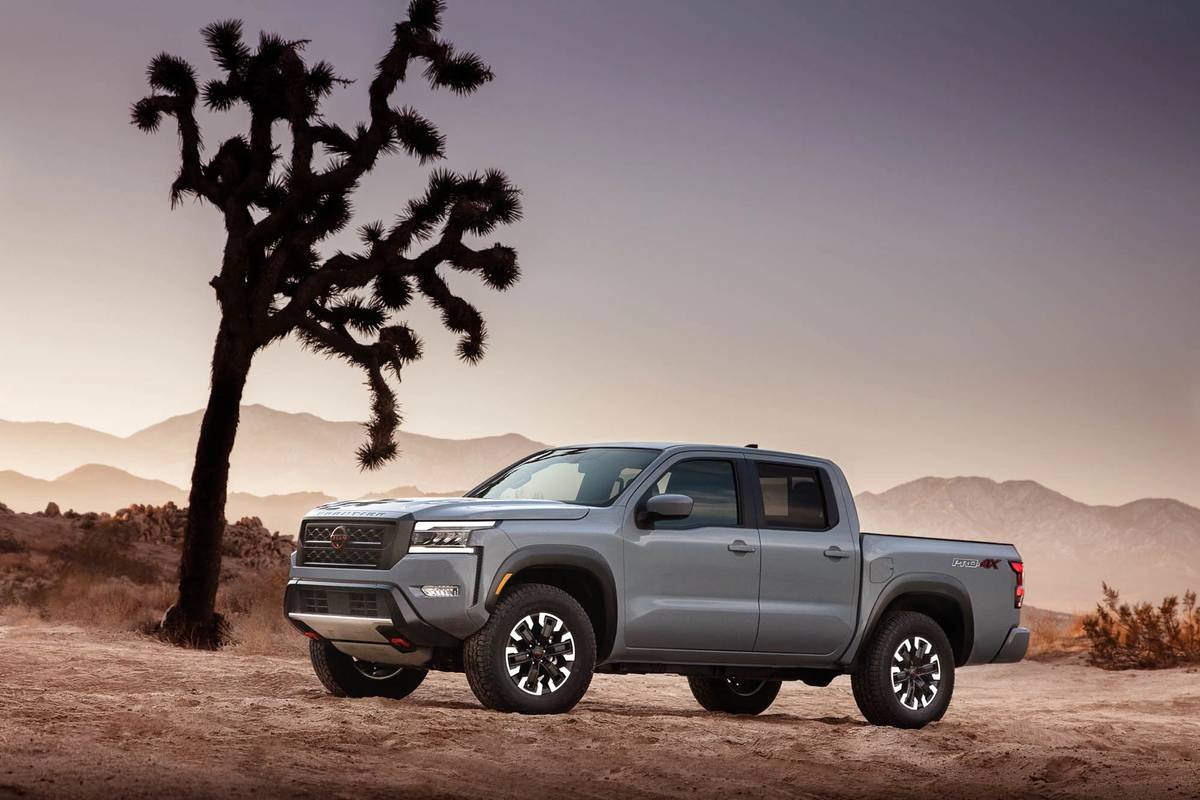 Nissan has finally, finally updated its ancient, tried and trusted Frontier mid-size pickup truck for the North American market. And we do mean for North America because this truck is not a clean-sheet, all-new vehicle that shares its bits with the global Nissan Navara mid-size pickup. According to Nissan, it’s a unique truck for our domestic shores, and while it might share some components with the global truck, it’s designed for our use here, and is based largely off the preceding model’s bones.

That means we get a truck with tidy dimensions that’s smaller than competing models like the Chevrolet Colorado or Ford Ranger. Nissan said going bigger didn’t really fit with what its customers said they wanted. Making it easier to drive, park and wheel the Frontier through the dirt was more valuable to Nissan’s loyal truck customers than extra space, so that’s what Nissan  delivered. That doesn’t mean that the new 2022 Nissan Frontier hasn’t been heavily updated, as it has, because the new truck looks to be a significant improvement over the old model.

The biggest and most obvious change is to the styling. Nissan designers said that their inspiration was the original 1986 Nissan Hardbody pickup with its very modern (for its time) slab-sided block-of-metal styling. But instead of going retro and mimicking the old truck, it used the Hardbody as inspiration and crafted something new that fits in well with the rest of the Nissan lineup and complements the bigger Titan nicely. The theme Nissan settled on is one of interlocking mechanical features, and it’s visible in the way the new optional LED headlights and available foglights, front fenders, bumper and grille all seem to “lock” into one another. It’s the same thing out back, where new LED taillights complement the stamped-metal Frontier script in the tailgate. The whole truck is beefier and chunkier, with a higher body side and smaller-looking greenhouse, giving it a more substantial appearance without materially affecting its overall size.

Four trim levels will be offered for 2022, as will King and crew cab models: the work truck S, the better equipped SV, the off-road-ready Pro-4X and the new Pro-X trim. The Pro-X is a two-wheel-drive version that gets some of the Pro-4X’s off-road goods, like tuned Bilstein shocks and all of its styling, but none of its beefier four-wheel-drive equipment  — similar to the Ford Ranger’s FX2 package versus the FX4. Two bed lengths (5 and 6 feet) will be available depending on trim and cab style, with the SV getting a long-wheelbase, 6-foot-bed crew-cab option. The Pro-X and Pro-4X will be crew-cab models only in the U.S., no King-Cab models for the off-road set.

The ’22 Frontier sits on the same chassis as the outgoing model, but it’s not fair to say that it’s an old design because it’s been continually updated and improved since it debuted in 2005, and receives significant upgrades for the ’22 model year. The wheelbase is unchanged at 126 inches, according to Nissan, which keeps it on the short end of the mid-size truck category. Only the Honda Ridgeline has a shorter wheelbase at 125.2 inches, while the Ford Ranger is next shortest at 126.8 inches before you get to the longer Chevrolet Colorado at 128.3 inches. An extended wheelbase Frontier will again be available, stretching up to 139.8 inches and combining the SV crew-cab body with the 6-foot long bed. A 5-foot bed is standard with the crew-cab model, while the 6-foot bed usually comes with the King-Cab short body.

As expected, the powertrain is the 3.8-liter V-6 and nine-speed automatic that we briefly saw in the 2020 Frontier after Nissan decided to do a special run of trucks that combined the old body with the next-generation powertrain. It officially makes 310 horsepower and 281 pounds-feet of torque, making it the most powerful base engine available in a mid-size truck. It’s a full 40 hp more than the next-most-powerful Ford Ranger’s standard turbocharged 2.3-liter four-cylinder engine, a situation that’s reversed in the torque department, where the Ranger outguns the Frontier with 310 pounds-feet. The nine-speed auto is the only transmission available, as the manual transmission is no more, nor is the prior generation truck’s four-cylinder engine. Rear-wheel drive is standard, with part-time four-wheel drive an option on the S and SV trim levels (four-wheel drive is not available on Pro-X and it’s standard on Pro-4X trims).

The chassis and suspension get love for 2022 as well. Specifically, the body mounts for the cab are now hydraulic for improved vibration damping, and new urethane jounce bumpers have been fitted. The suspension bushings are retuned for better isolation and ride quality, while a larger front stabilizer bar and new rear stabilizer bar have been added. The steering system has been retuned with an updated hydraulic rack-and-pinion system — there’s no electronic power steering, which means no lane departure mitigation or automatic steering systems on this generation of the Frontier, not yet anyway. Also added is a quicker steering ratio for more responsive steering feel. The tow rating has not changed from the prior model — it’s still 6,720 pounds maximum when properly equipped, but electronic trailer-sway control is now standard.

The Pro-4X off-road trim gets specially tuned Bilstein off-road shocks, 17-inch Hankook All-Terrain tires and skid plates covering the front end, gas tank and transfer case. An electronic locking rear differential is also included with the Pro-4X, as are more rugged looking interior and exterior trim accents. The new 2WD Pro-X trim gets all of the cosmetic changes of the Pro-4X as well as its own specially-tuned Bilstein shock absorbers, but none of the 4WD equipment that would actually make it an off-road-capable truck like the skid plates and electronic locking differential.

Out back, the bedsides are now taller than the previous model, but integrated bed steps should help people get items in and out more easily. The tailgate is damped, allowing it to be closed with minimal effort, while a three-channel Utili-track system is optional for helping to secure items in the bed. A factory spray-on bedliner is optional, as is a 110-volt bed power outlet and LED lighting.

The cabin itself gets a full redo and what looks to be a significant upgrade over the ancient, plasticky old digs. The “mechanical interlocking elements” theme from the exterior is also present inside, with a thick spar spanning the width of the dashboard, interrupted by the center console. The dash now sports a standard 8-inch touchscreen or an available biggest-in-the-class, according to Nissan, 9-inch touchscreen; a 7-inch display screen is standard in the gauge cluster. Apple CarPlay and Android Auto are standard on all models. Nissan’s Zero Gravity seats make their debut in the Frontier, and new special orange accent trim is present in the Pro-X and Pro-4X trims. The SL trim has been discontinued, so there’s no special luxe trim for the Frontier anymore, but a leather interior will be optional in one of several packages that Nissan has said it will announce closer to the on-sale date.

With the new interior comes a significant bump in interior storage. The redesigned center console now features 4.0-liters of storage – Nissan says that’s double of most mid-size trucks — while there’s 6.5 liters of storage in the front door pockets and 5.7 liters in the rear door pockets. There is also standard underseat storage in the second row. Interior tech gets some help as well, with two USB ports standard and two more optional. A second 110-volt, 400-watt household outlet is also available in the cabin, as are heated seats and steering wheel. A wireless smartphone charger is available, as is onboard Wi-Fi and an optional nine-speaker Fender Premium Audio system.

The new Frontier also gets considerable improvements to its onboard safety systems, now featuring the available Nissan Safety Shield 360 system that include automatic emergency braking with pedestrian detection, blind spot warning, rear cross-traffic alert, lane departure warning, high-beam assist and rear automatic braking. Standard safety systems include forward collision warning, tire pressure monitor with Easy Fill Tire Alert and rear door alert. More extra-cost features include automatic cruise control, traffic sign recognition and a driver alertness monitor. One interesting optional feature is the Intelligent Around View Monitor with a 360-degree picture of the truck’s surroundings, but now featuring an Off-Road mode that allows it to operate at low speeds when 4-Low is engaged to allow for viewing the terrain the Frontier is rolling over.

No pricing is yet available for the new Frontier, and we’re still waiting on some final dimensions like interior volume, fuel economy, curb weight and the various off-road clearance angles. All of that is expected to be announced closer to the truck’s on-sale date, which will be sometime this summer.