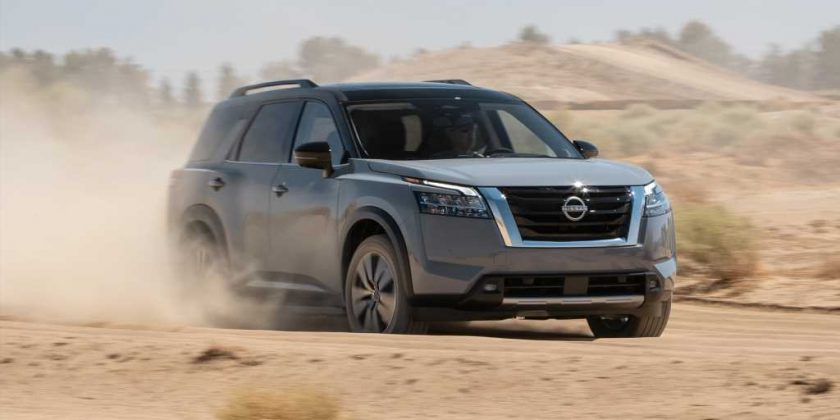 The latest iteration of Nissan’s family-friendly Pathfinder three-row SUV doesn’t return to the nameplate’s body-on-frame roots, but it does receive a much-needed dose of ruggedness. A primary factor in that shift is the bolder, squarer styling, which our SUV of the Year judges agreed is handsome and better than that of its soft-lined predecessor.

Of course, the new model’s improvements are more than skin deep. Although this fourth-generation Pathfinder uses the same V-6 engine as before, it gets a new nine-speed automatic transmission and an optional all-wheel-drive system that Nissan says can shift power more quickly and offers greater torque capacity at the rear axle.

Despite this—and its name—the Pathfinder seemed out of its element off-road. Intrusive traction control hindered its momentum in the sand and ruts, regardless of drive mode. Unsurprisingly, the front-drive model we evaluated was an even weaker performer in the dirt. That said, despite their trepidatious pace, neither Pathfinder got stuck, but a primary rival on hand, the Jeep Grand Cherokee L, cruised through the same challenges as if they were paved.

The Nissan impressed us more with its family-centric features. Between the wide cargo area and spacious first and second rows, the overall packaging received praise. “I like how the second-row seat slides forward with the touch of a button. Its spring-loaded release works well,” editorial director and new dad Ed Loh said. It’s a better solution than in the Grand Cherokee L, which releases its heavy second-row seats via a high-mounted latch out of reach of children.

Pressing that button creates a wide aperture for third-row access, but several 6-ish-foot-tall judges were divided on whether those seats were suitable for anyone besides youngsters. Associate editor Duncan Brady called its legroom “unacceptable,” and senior editor Greg Fink felt “cramped.” Conversely, Mexico editor Miguel Cortina appreciated how “the seat reclines for a more comfortable position,” while technical director Frank Markus had “plenty of legroom with the middle-row seats slid forward.” All of them—as well as the other judges—liked how third-row riders get air vents, cupholders, and USB ports.

From the driver’s seat, the experience was mixed but improved from our first test of a pre-production model.  The powertrain acquitted itself better, with the notably uneven power delivery somewhat smoothed by updated transmission programming that also slightly mitigates the gearbox’s zeal for selecting higher ratios. The ride quality was fine, ironing out most bumps. The Pathfinder isn’t a zesty handler, but it does offer decent body control. Vibrations from the powertrain and chassis troubled some judges, however. Guest judge Gordon Dickie, a former Mazda R&D chief, felt them “coming through the steering wheel and floor pan even on smooth roads.”

All told, we agreed this new Pathfinder is an improvement—it’s nicer looking, more versatile, and better to drive than before. Yet the segment has moved beyond where Nissan seemingly set its goal posts, with our 2020 SUV of the Year, the Kia Telluride, and this year’s excellent Kia Sorento and Grand Cherokee L representing the new state of the three-row art. Cortina summed up our consensus: “The Pathfinder feels more competitive in its segment, but that wasn’t hard to achieve.”