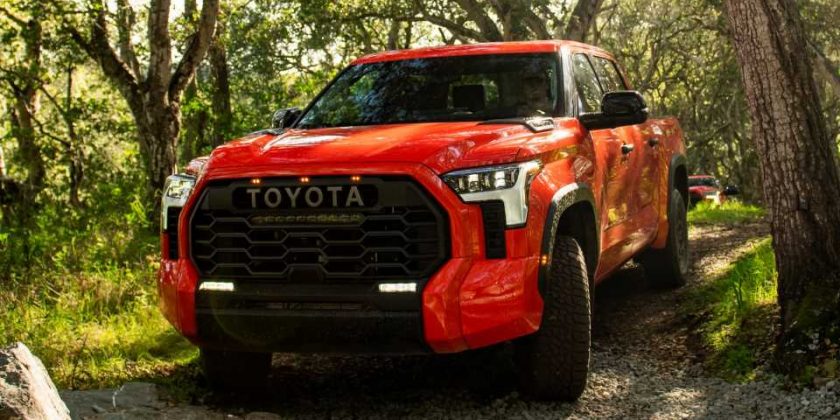 Toyota has been making hybrids for well over 20 years, but the all-new 2022 Toyota Tundra’s i-Force Max hybrid powertrain is something new, at least for Toyota. While Toyota’s other hybrids (most notably the Prius) use a parallel system (where a gasoline engine and two electric motor-generators connect to a planetary gearset transmission), the i-Force Max—which will also serve as the sole powertrain for the upcoming 2023 Sequoia—is a series system, sandwiching a 48-hp electric motor between a 3.4-liter twin-turbo V-6 and a traditional 10-speed automatic transmission.

Why the change? According to Toyota, one limitation of the parallel approach is that it cannot deliver continuous maximum torque because the engine never connects directly to the wheels; it must power the motor-generator that is not directly connected to the wheels. The series system allows both gasoline engine and electric motor to dump 100 percent of their available torque into the driveline simultaneously, and torque is what pickup trucks need. A clutch between the gasoline engine and the electric motor allows the Tundra hybrid to move on battery power alone, but it does so only at slow speeds and light throttle application.

Speaking of the Ford F-150 PowerBoost, Tundra shoppers hoping for a mobile power station like Ford’s ProPower system are out of luck. Hybrid Tundras have the same 120-volt, 400-watt outlets as non-hybrid versions, but nothing like Ford’s optional 240-volt, 7,200-watt system. Toyota said it didn’t think it was something customers were clamoring for. There is no way it missed the news stories about Texans using F-150s to heat their homes during last winter’s freeze-induced power outage, a situation with a possible repeat one year later as a winter storm descends on the state this week. Toyota is based in Texas, and some of its employees surely experienced last year’s winterpocalypse first hand. Let’s hope the power grid holds up this time.

We sampled various Tundra hybrid models, and what impressed us most was the i-Force Max’s refinement. Keep in mind what a massive change this is for Toyota: The engineers effectively turned their backs on two decades of parallel hybrid development and did something completely new, yet the i-Force Max system is every bit as smooth and seamless as any other Toyota hybrid.

Under very light throttle, we occasionally noticed a slight bump as the clutch between the engine and motor closed. Decoupling is seamless; like most hybrids, the Tundra shuts its gas engine off early as you coast to a stop, and the only indication we had that the engine had dropped out was the hybrid chiming—a sound many electrified vehicles play to alert the sight-impaired of their silent approach. Speaking of sound, the hybrid Tundra uses the same piped-in engine soundtrack as the gas truck, boosting our impression that this is one of the most non-hybrid-like hybrids we’ve driven. Someone who wasn’t clued in might well think they were driving a Tundra with a conventional V-8.

Toyota’s engineers told us their goal for the hybrid system was to create a diesel-like torque curve with strong low-end power. The electric- and turbo-boost gauges—Toyota didn’t fit the Tundra with a traditional power flow gauge, which is too bad—shows that the i-Force Max’s electric motor primarily works at low speeds and low rpm, filling in the gap between the driver hitting the accelerator and the turbos building boost. The motor also helps out under sudden full-throttle demands—goosing the accelerator to pass, for example—providing a jolt of juice until the turbos spin up. The motor’s job is effectively to eliminate turbo lag, which isn’t much of an issue in the Tundra to begin with, and once the turbochargers are doing their thing, the electric motor stays mostly dormant. Because the motor is positioned ahead of the transmission, i-Force Max fills in torque dips while the transmission shifts, but Toyota’s 10-speed snaps to attention nicely, and it’s certainly smoother than the Ford hybrid’s 10-speed.

Hybrid Delivers What We Expected When Towing, But Not Off-Roading

We towed a 4,500-pound Airstream travel trailer with a hybrid Tundra, and the electric boost allowed us to move off smartly—a notable change from the non-hybrid Tundra, which needs a lot of revs to get a trailer into motion. Hybrid-equipped Tundras tow slightly more than their non-hybrid counterparts, with tow capacity ranging from 10,340 pounds for the 4×4 Capstone to 11,450 for the Limited 4×2 model with a crew cab and short bed. However, the towing champ in the Tundra lineup is still the lightweight non-hybrid SR5 model, which can pull up to 12,000 pounds.

We took a Tundra TRD Pro (it’s exclusively a hybrid) on a fairly challenging off-road course and were surprised at how little the hybrid powertrain came into play. Our cross-country trip in the Rivian R1T and our time with the Jeep Wrangler 4xe has made us fans of electric off-roading, but when we shifted the transfer case of the Tundra TRD Pro to 4-Low range, the gas engine started and stayed running for the length of the trail, and we were unable to detect the hybrid system offering assistance as we crawled through the dirt and mud. We asked Toyota’s engineers why there’s no silent electric off-roading option, and they cited the clutch between the engine and motor. Connecting and disconnecting the engine and motor would cause a jerk, the antitheses of the smooth throttle modulation that off-roading requires. They assured us the motor can help out if you open the accelerator climbing a grade or crossing a bog.

Toyota is offering the i-Force Max hybrid powertrain as standard for the TRD Pro and new top-of-the-line Capstone models. It’s optional in the Limited, Platinum, and 1794 Edition trims, but not the basic SR and SR5. All Tundra hybrids have crew cabs—the battery lives under the rear seat—but buyers can choose from 5.5-foot-bed, short-wheelbase or 6.5-foot-bed, long-wheelbase variations. The price premium for the i-Force Max hybrid is $3,400 in all models, so the range spans from $53,995 for the short-box 4×2 Limited to $66,115 for the long-box 4×4 1794 Edition. The hybrid-only TRD Pro lists for $68,500, while the Capstone goes for $75,225; both are available exclusively as four-wheel-drive, short-wheelbase, short-bed models.

Speaking of the Tundra Capstone, we got our first drive in this high-zoot competitor to the Ford F-150 Limited, Chevrolet Silverado High Country, GMC Sierra Denali, and Ram 1500 Limited. What sets the Capstone apart from other Tundras? Outside, it gets extra chrome for the grille (at first glance, it isn’t all that easy to distinguish from the Platinum and 1794 models) and big, shiny 22-inch wheels, along with Capstone lettering on the door. Inside you’ll find two-tone black-and-white leather of the same type used in the Lexus LS, open-pore wood, ambient lighting, and a high level of standard equipment—every available feature in the Tundra comes standard except for towing mirrors, adaptive air suspension, air springs, and a head-up display, which are optional.

Although we like the idea of a high-end Tundra, we have to wonder whether any of the Capstone designers has ever owned a pickup truck. The two-tone interior looks beautiful, and the soft leather on the steering wheel feels great under our palms. But white leather on the armrests, steering wheel, and dashboard? On a pickup? Someone didn’t think that one through, unless Toyota plans to add a built-in sink to wash your hands after hooking up a trailer or loading the bed with fill dirt. And those 22-inch wheels might look nice, but they take the Tundra’s lumpy ride, which already deteriorates quickly on bad pavement, and make it even worse. (And yes, we tried the adjustable suspension’s Comfort and Sport modes; we think they should be labeled “uncomfortable” and “just a smidgeon more uncomfortable. “) A $75,000 truck with a dirt-magnet interior and a dreadful ride? We’ll take a pass.

But the rest of the hybrid lineup? Yes, we like it. Much as Toyota might want us to believe otherwise, an electrified pickup like the Tundra i-Force Max is a world away from a true electric pickup like our Truck of the Year-winning Rivian R1T, the Chevrolet Silverado EV, the Ford F-150 Lightning, or the GMC Hummer EV. But a well-built, refined truck that uses less fuel and does a better job at towing and hauling—and one that imposes no penalty from its drivers save a slightly higher price? That seems like a sensible proposition to us.