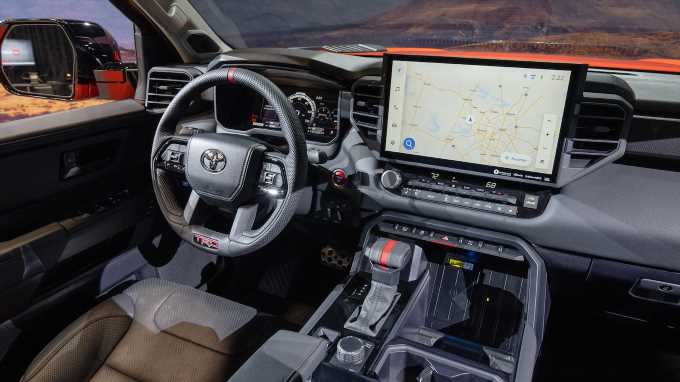 Sit inside the 2022 toyota tundra, and you’ll probably be at least somewhat impressed by its technology, modern touches, and overall design. The new interior is not only an improvement over the outgoing Tundra’s—that wasn’t hard to do—but it also stands out among those of other full-size trucks, which isn’t as easy. Customers wanted a more sophisticated cabin and Toyota delivered—the new Tundra cabin ups the experience in every single way.

The new Tundra is available in SR, SR5, Limited, Platinum, 1794, and TRD Pro trims, and each is differentiated by unique interior details. The SR and SR5 have rugged appearances, whereas Limited and Platinum get more refined looks. As in the past, the 1794 is the most luxurious, while the TRD Pro’s cabin makes it clear to occupants they’re riding in an off-road-oriented truck.

And now, here’s a deeper look inside the new Tundra.

The first thing you notice in the cabin of higher trims is the new, available 14.0-inch touchscreen with a fresh infotainment system developed in house by Toyota Connected Services. The landscape-oriented display has excellent resolution and works like a tablet, where you can touch, swipe, and pinch in or out for several functions. We’ve seen large screens in Toyotas before, but this display—which we’ll see in future models from the company—finally feels properly current.

The infotainment system has icons that are well spaced out and is compatible with wireless Apple CarPlay and Android Auto. It uses Google Maps for navigation, which provides hours and phone numbers of the retailers or other locations in addition to the reliable Google navigation. Apple Music and Amazon Music are installed on the system itself, and users sign in through the Toyota App to link their music streaming accounts. And for the first time ever, the Tundra is getting voice commands that work by saying “Hey, Toyota.” The system lets the user ask for directions or change the A/C temperature setting, among other commands.

The standard display is an 8.0-inch touchscreen that runs the same new infotainment system. We’ve yet to see the smaller display in action, but we’re told it works just as well as the big screen, which we’re eager to verify.

Similar to what Ram has done with its 1500 and 2500 trucks, each Tundra model sports distinct décor. For example, while all Tundra models have the same spacious center console, the dashboard design is different in each truck. The patterns on the seats of each version are unique in order to appeal to the intended buyers of each model. The 1794, for example, has a classier look, whereas the TRD Pro has a camo-style seat pattern. The SR, which is the work truck version, has a tray on the passenger side dashboard that holds small items like a measuring tape or gloves.

We spent most of our time in the 1794, and although we like its aesthetic and high-quality materials, it still doesn’t feel quite as premium as the fanciest Ram 1500s. Kevin Hunter, president of Toyota’s Calty Design Studio and lead Tundra designer, said he stayed away from shiny surfaces such as chrome to maintain a rugged look.

The 2022 Tundra will be available with two cabs: Double Cab with rear half-doors and CrewMax with four full doors. We only had a chance to get inside the CrewMax cabins, but we liked how spacious and versatile the rear seats are and appreciated the underseat storage (though the rear seat storage isn’t available in Tundra i-Force Max models due to the hybrid battery pack).

The seat cushions can be folded up against the rear just like the current Tundra, but unlike the current truck, a long and versatile space below was designed to store hunting rifles, fishing poles, and the like. Fold the seat backs down, and a separate storage space behind allows owners to stash more stuff, although it’s not crazy deep. Depending on its size, you may be able to squeeze in a duffle bag.

For the first time ever, the Tundra is getting an optional 12.3-inch digital instrument cluster, which definitely modernizes the cabin. The massive display provides a clear layout of information and features multiple high-resolution graphics and readouts.

Tundras without the full digital display have large analog gauges with a smaller information screen between.