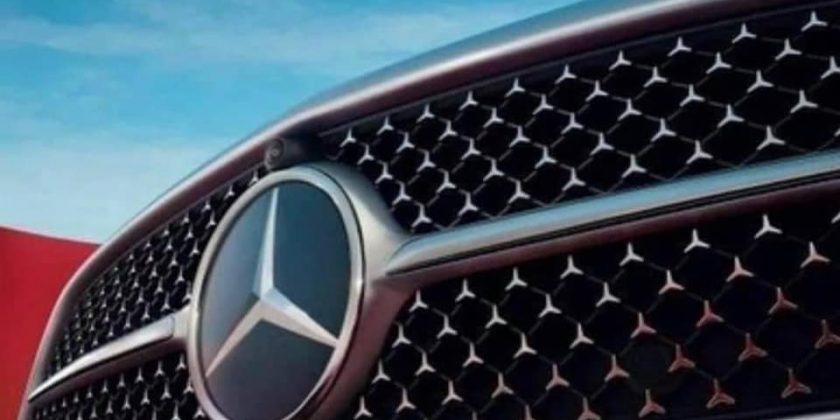 We’ve had our first uncovered look at the 2022 W206 Mercedes-Benz C-Class over the weekend, via what looks like official press photos that were leaked slightly ahead of the planned February 23 official reveal. Now here are a couple more images, showing the compact executive’s sporty AMG Line trim level, as well as some interior details.

We’ll start with the AMG Line, which has got so popular in our parts that the sporty trim level seems like the default one now. The white Avantgarde car that we saw had vertical grille slats, while the silver AMG Line you see here sports pins on the grille, a now familiar cue.

Interestingly, the bright parts of the pattern – the pins – are actually little three-pointed stars surrounding the large central logo, as seen in the official teaser banner. There’s also a camera above the big star.

The bigger change from the Avantgarde car is the front bumper. I find the AV’s front bumper to be quite odd, like a two-ended spoon, and very prominent. The AMG Line has larger and more angular “side intakes”, joined by an upturned lip. Looks more “normal” here compared to the AV IMHO – what do you think?

By the way, the shape of the grille differs from the AV’s. It’s more of a trapezoid with rounder edges here, while the AV’s nose is more like an organic hexagon. The “mini S-Class” you see here wears large double-five-spoke alloys, while the more luxury-style Avantgarde had multi-spoke rims.

On to the other details. The W206’s dashboard is dominated by a very big touchscreen (see the graphics here) covering almost the entire centre stack, topped by three round AC vents. Once again, the dash design follows the W223 S-Class, although the vents on the limo are square. The previous dash pic we saw had pinstripe inlays; this one has carbon-style glossy trim for a sportier feel.

Lastly, we also get a glimpse of the rear seats (in tan leather) and rear door card design. There’s a graphic showing +2cm of rear kneeroom, which is much welcomed in the C-Class, which is rather tight at the back in outgoing W205 form. So, do you prefer the look of this or the old one?

Specs wise, we do have some official details of the W206 courtesy of selected media who have previewed Stuttgart’s latest exec. Compared to the W205, the new C-Class is 65 mm longer – 10 mm in the front overhang, 30 mm in the wheelbase and 25 mm in the rear overhang. This would put the its length at 4,751 mm and the wheelbase at 2,865 mm, both longer than the G20 BMW 3 Series.

Mercedes-Benz User Experience (MBUX) makes its way into the C-Class for the first time, and this latest version has an improved “Hey Mercedes” voice control system, smart home integration and an upgraded MBUX Interior Assistant. legroom and 13 mm more headroom.

Under the hood, the C will switch to a full four-cylinder engine lineup, and this will include the AMG models. The whole range is expected to have mild hybrid tech, while the C300e PHEV is set to have a 25.4 kWh battery and over 100 km of range, more than double the previous-gen. Stay tuned for the launch report.