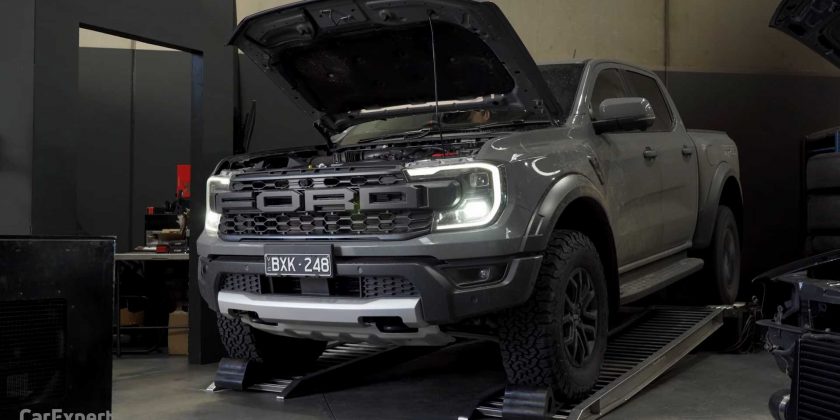 It feels like US buyers have waited forever for the new Ford Ranger to arrive. Meanwhile, truck fans in Australia have the midsize truck in a variety of flavors to sample right now, including the hot Raptor. This new video from Car Expert takes three versions to a chassis dyno for some power testing.

It’s been nearly a year since the 2023 Ranger debuted to a global audience, so let’s go through a quick refresher. Powertrains will vary by region, with diesel power prevalent outside the US. For Australia, that means a turbocharged 3.0-liter V6 making 247 horsepower (184 kilowatts) and a twin-turbocharged 2.0-liter four-cylinder good for 207 hp (154 kW). Of greater interest is the Ranger Raptor, which wields a twin-turbocharged 3.0-liter V6 gas-burner. European emission regulations limit power to 288 hp (214 kW), but in Australia, it’s good for 392 hp (292 kW). We expect a similar rating for North America.

Before discussing the dyno numbers, it’s important to note that such figures can vary greatly depending on all kinds of factors. We’ve certainly seen crazy numbers resulting from incorrect dyno settings; atmospheric conditions and transmission types can also play a role. We point this out because the numbers shared in this video are quite surprising, with the diesels showing much more power than expected at the wheels. Meanwhile, the Raptor checks in with less.

First, the diesels. The four-cylinder Ranger showed 170 hp (127 kW) to the wheels. That’s an 18 percent power loss, which is generally considered above average for a vehicle with an automatic transmission. The V6 diesel does even better, laying down 212 hp (158 kW). Doing the math, we see there’s only a 14 percent power loss between the engine and the ground. That’s well above average, even for a vehicle with a manual gearbox. However, Ford dropped the manual Ranger for 2023 in Australia, so all the trucks here are running a 10-speed automatic.

Now for the Ranger Raptor, and here’s where things get strange. The off-road-focused truck posted 274 hp (204 kW) to the rear wheels, which represents a whopping 30 percent power loss from the engine. Losses ranging from 20 to 25 percent with a traditional automatic transmission are common, so we’re left with something of a quandary. Are Ford’s diesel Rangers underrated? Is the Ranger Raptor overrated? Are we dealing with errors in dyno settings? Or is something else happening here?

With next-generation Ranger pickups still absent in most of the world, we’ll likely have longer to wait before seeing more dyno testing. The results in this run at least give us something to consider as more trucks make their way into the hands of owners.