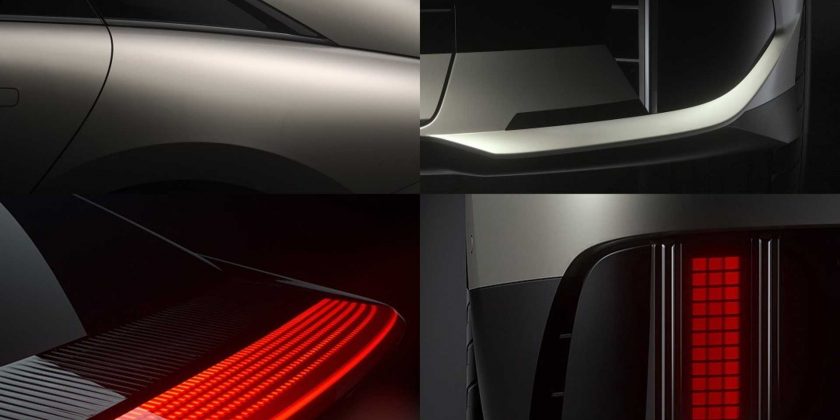 Hyundai is providing a better look at the hotly anticipated Ioniq 6 ahead of the EV’s reveal this week. The Tesla Model 3 rival has been subjected to a lengthy teaser campaign that started nearly two and a half years ago when the Prophecy concept was unveiled. The road-going model won’t be as sleek as the showcar, but that doesn’t mean the production version is going to look boring. On the contrary, these up-close renderings are quite promising.

The so-called Parametric Pixel design theme shared with the Ioniq 5 crossover is evident in these teasers showing a wide third brake light built into the rear spoiler. More squares have been embedded into the vertical reflectors at the back and we can also catch a glimpse of the almost coupe-like roofline. Where legal, the Ioniq 6 will have these side cameras replacing the conventional mirrors.

A section of the production-ready front bumper is also shown with its smooth surface to aid aerodynamics. We can also see the large alloys featuring an intricate spoke design that’ll likely make the wheels a pain to clean. As expected, the 2023 Hyundai Ioniq 6 will have pop-out electronic door handles to reduce the wind resistance and therefore boost the range.

Described as being an “electrified streamliner,” the second dedicated EV from the Ioniq series is expected to come in both single- and dual-motor setups with rear- and all-wheel drive, respectively. It’ll reportedly get a 77.4-kWh battery pack and roughly 300 hp in the most potent version available upon launch. Hyundai is working on an Ioniq 5 N so we shouldn’t exclude the possibility of a hotter derivative for the sedan as well.

Fully revealing images will be released by the South Korean marque later this week. However, in typical Hyundai / Kia / Genesis fashion, we’ll have to wait a bit more for technical specifications. Rumor has it all the juicy details are going to be disclosed in mid-July during the 2022 Busan Auto Show where the Ioniq 6 will get its first public outing.

Come 2023, Hyundai will expand its Ioniq portfolio with a fullsize, three-row SUV previewed by the Seven Concept. It too will sit on the E-GMP platform as the Ioniq 5 and 6, with an equivalent Kia version to be called EV9. There also might be a more luxurious GV90 from the Genesis brand.