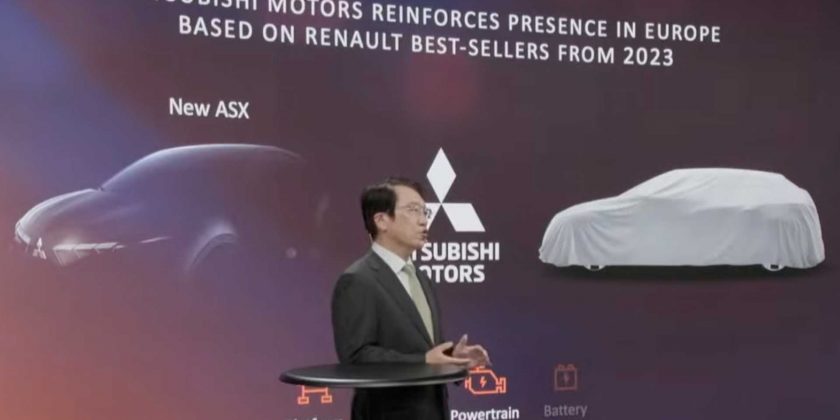 In July 2020, Mitsubishi announced it would not introduce any new models in Europe by deciding to stick with its existing models. The company had a change of heart in March 2021 when it revealed plans to launch two cars on the Old Continent based on Renault products. At that moment, Mitsu said the vehicles would be built by the French company with the diamond logo and hit the market sometime in 2023.

Fast forward to this week, the conference held by the Renault-Nissan-Mitsubishi alliance included some tidbits about the new vehicles. Scheduled to go on sale in early 2023, the first one will be the next-generation ASX. As you might have figured out by now, it will be heavily based on the Captur, but more than just a rebadged vehicle. The teaser gives us the impression it will look substantially different, although we’re sure some of the body panels will be shared.

The current ASX / Outlander Sport / RVR is getting a bit long in the tooth considering the subcompact crossover has been around in its third generation since early 2010. Its replacement will be assembled at the same factory in Valladolid, Spain where the Captur is manufactured. Mitsubishi goes on to say it will sell its B-segment crossover with hybrid and plug-in hybrid powertrains, obviously inherited from its French brother.

Details regarding the second model have not been disclosed, aside from a sales start later in 2023. It too will be a Mitsubishi design on top of a Renault product with electrified powertrains. Logic tells us it will be bigger than the ASX, so perhaps a compact crossover twinned with the Austral, the Kadjar replacement. However, this has not been confirmed and it’s pure speculation on our part.