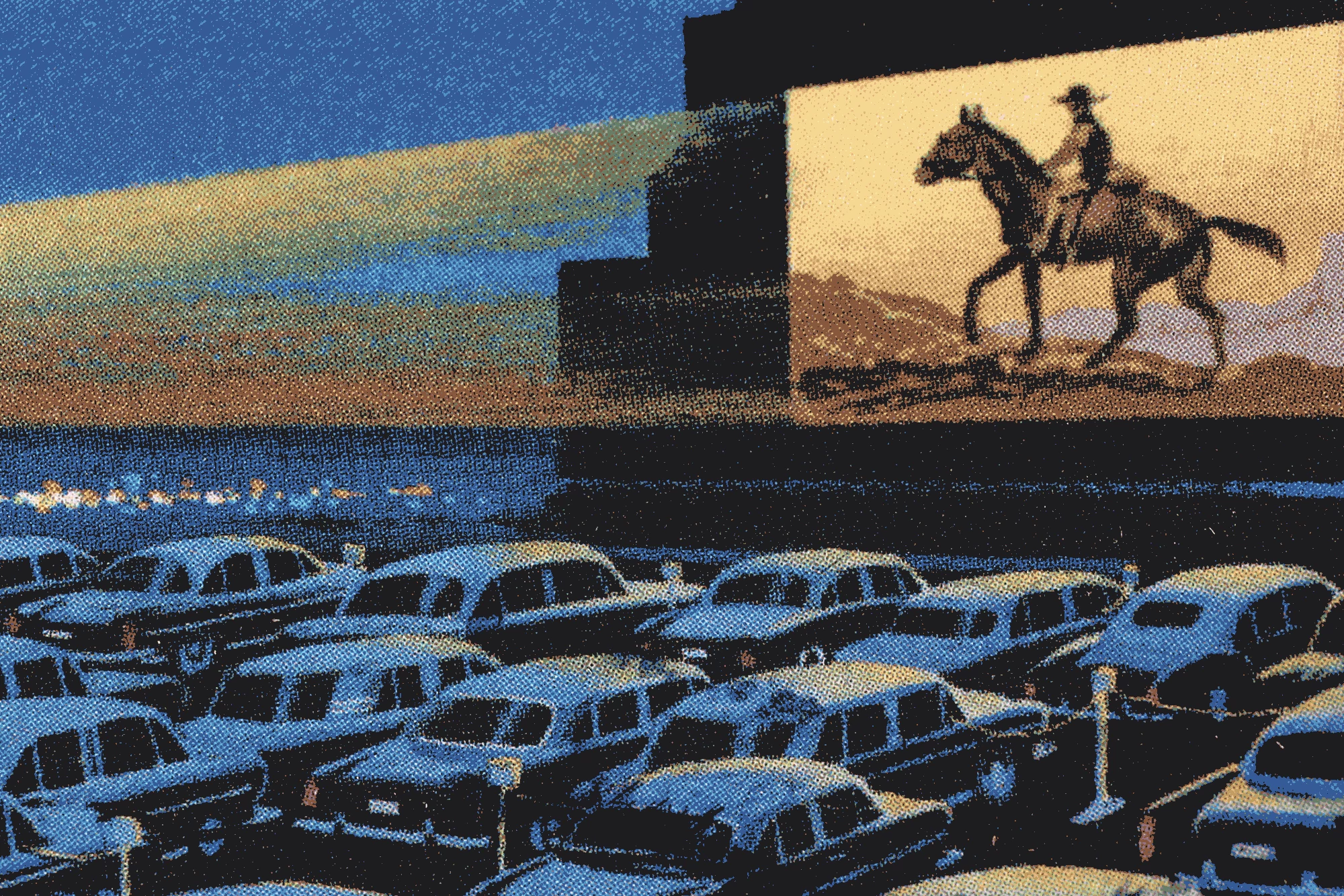 After months of quarantine, shelter-in-place, stay-at-home or whatever they’re calling lockdowns where you live, we’re starting to see some light at the end of the tunnel — and some of that light is coming from the glow of an outdoor movie screen against the night sky as you drive toward it in the distance. It may be difficult to imagine much of anything positive coming from the coronavirus pandemic, but there have been little silver linings here and there: reduced air pollution, less traffic, plummeting gas prices … and the resurgence of the drive-in movie theater.

As emergency social distancing measures went into effect across the nation earlier this spring, among the stores, restaurants and other businesses forced to close, movie theaters went dark — except for some of that peculiar type you can drive your car straight into, park in front of the big screen and enjoy an entire double feature without ever leaving the relative self-contained safety of your vehicle. Yes, as coronavirus closures throw the very future of theatrical film exhibition into uncertainty, the drive-in — a nostalgic icon of a bygone era conjuring Atomic Age images of soda shops, poodle skirts and “parking” — has shown renewed viability as a combo of cabin fever and caution have lured moviegoers back to this otherwise antiquated industry. On one weekend in early April, just 14 movie theaters in the entire U.S. purportedly opened their box office — 13 of them drive-ins.

With just 305 drive-in theater locations left in America — compared with some 4,000 during the so-called golden age in the 1950s and ’60s — outdoor theaters, also known as “ozoners,” were all but gasping their final breaths. Now, as Americans approach Memorial Day in a world forever changed by COVID-19, it’s starting to look like folks back then were onto something.

A closely related pastime of the era was cruising — look no further than nostalgia-mold-setting movies like “American Graffiti” or “Grease” — and the drive-in of yore was like a fashion runway for showing off your ride. And for the movie lovers among us here at Cars.com, wheels ’n’ reels are two great tastes that taste great together, so the prospect of a drive-in revival is a silver-screen silver lining to this whole thing we’re inclined to celebrate (bearing in mind likely restrictions, of course, on vehicle proximity, concessions and restrooms).

In eager anticipation of the holiday weekend and upcoming outings to the outdoor theater for films al fresco, we came up with a list of vehicles (in no particular order or ranking) that’ll each accommodate your experience in their own way. Here are six of the best cars to take to the drive-in: 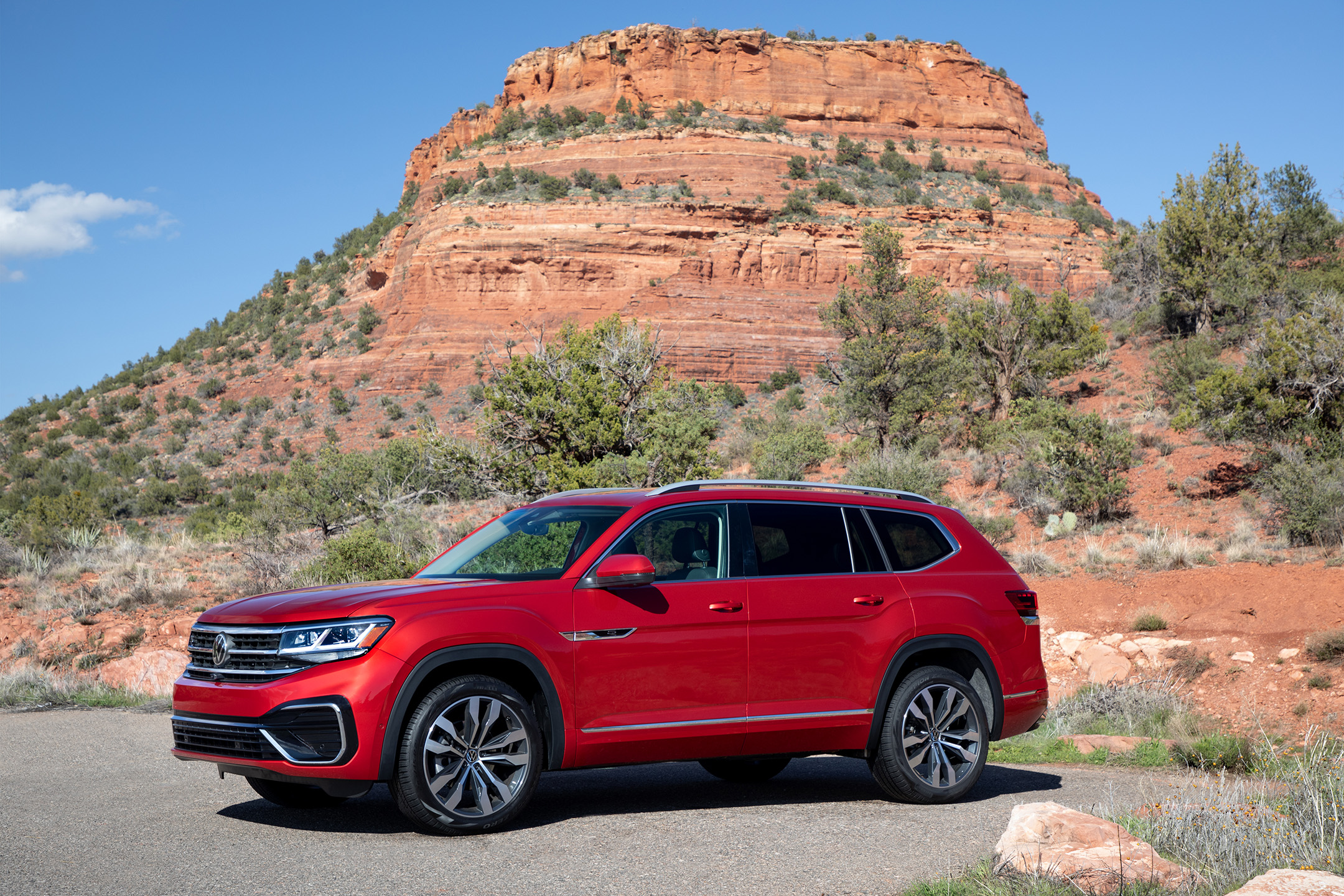 The sensible-yet-sexy Volkswagen Atlas three-row SUV earned Cars.com’s top overall award as our Best of 2018 vehicle and subsequently nabbed our 2020 Family Car of the Year award. So … can recommend. But beyond being able to comfortably load up as many as seven occupants for movie night in the Atlas’ elegantly understated cabin, if you opt for the SEL Premium Fender 12-speaker audio system, you’ll markedly improve the film soundtrack pumped through your car stereo as opposed to those tinny-sounding, old-timey post-mounted drive-in speakers.

We’ve heard better car stereos, but if you get the premium sound system upgrade, you’ll find it money well spent for high-quality sound in a family hauler we’ve shown a whole lotta love in recent years. It may not be Dolby Atmos, but it is Volkswagen Atlas, at least — and that ain’t bad. 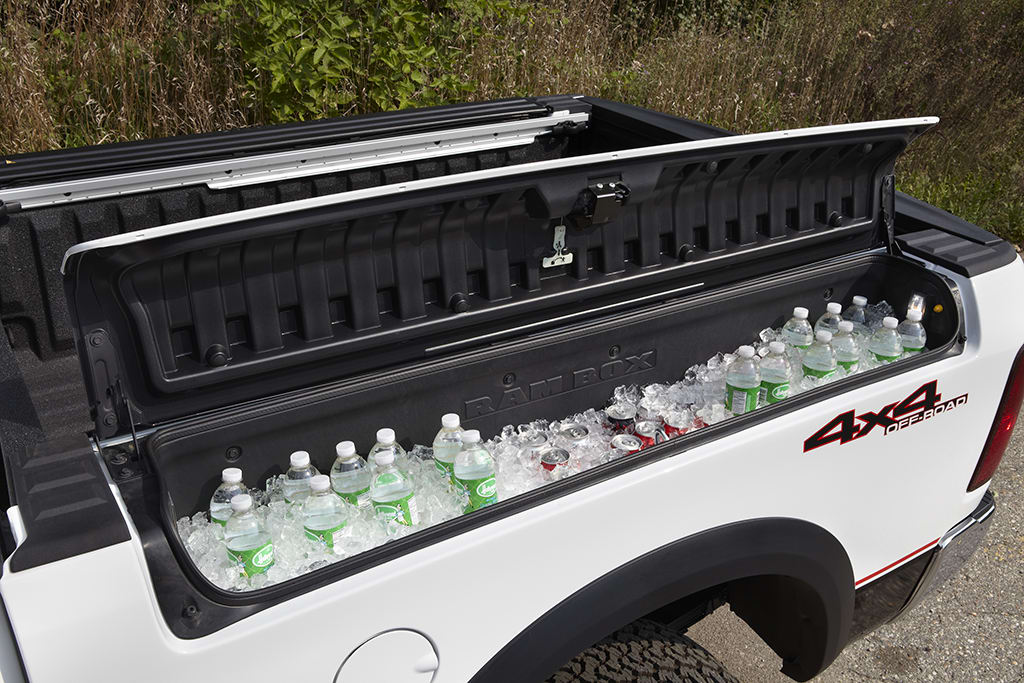 Having optimized sound to maximize your film experience is cool and all, but c’mon, who are you, friggin’ A.O. Scott over here? You came to have a good time chillin’ outside on a warm summer’s night with a fun distraction in the foreground. To that end, vehicles come no better equipped for drive-in movies than the Ram 1500.

What makes it more desirable than any other pickup truck? Why, the RamBox, of course. The RamBox Cargo Management System is technically just a fancy toolbox incorporated into the side rails of your truck bed that flips open to reveal a massive locking, conveniently lit storage space inside your hull. Get this, though: It’s drainable, meaning you can fill that bad boy with ice to keep your candy bars and other movie treats cool — you can put six packs of bee … soda in here! You’ll be the best stocked vehicle in the whole drive-in, and everyone you’re with will have a tonneau fun. 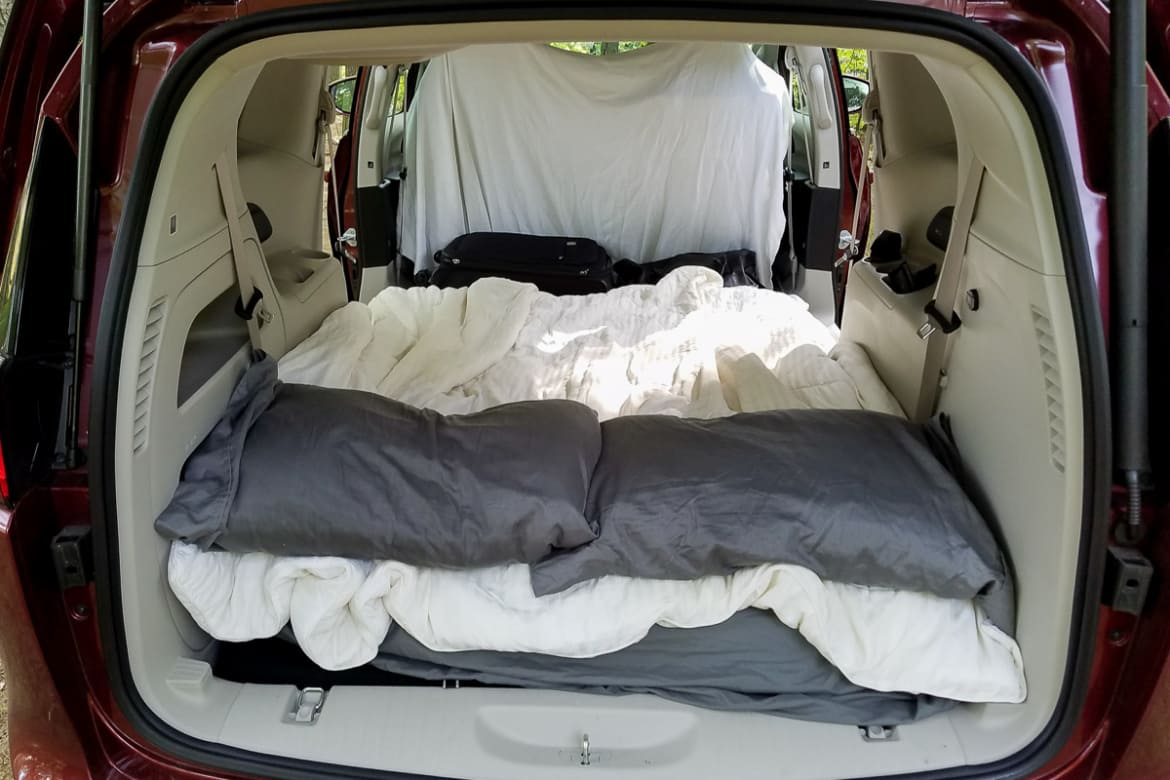 This one’s a no-brainer. The Stow ‘n Go seats create a ginormous flat surface ideal for settling in for a long night at the moving pictures. Cars.com’s Best of 2017 boasts plenty of mini cubbies and storage nooks in back for your popcorn, Sno-Caps, Milk Duds, Red Vines and Coca-Colas. And all you’ve gotta do is park with your rear end facing the screen (the Pacifica’s, not yours), pop the liftgate and spread out your blankets and pillows, and you’re snug as a bug in a rug while sheltered from the rain should Mother Nature try to throw water on your good time.

Oh, and if the film turns out to be terrible — perhaps you’re seeing that Robert Downey Jr. “Dolittle” movie — you can just pop in a better one from your own Blu-ray collection. If you’re bent on RDJ that night, maybe bring along your copy of “Avengers: Endgame” courtesy of the fantastic Chrysler Uconnect infotainment system. (Either way, you’ll love it 3,000.) 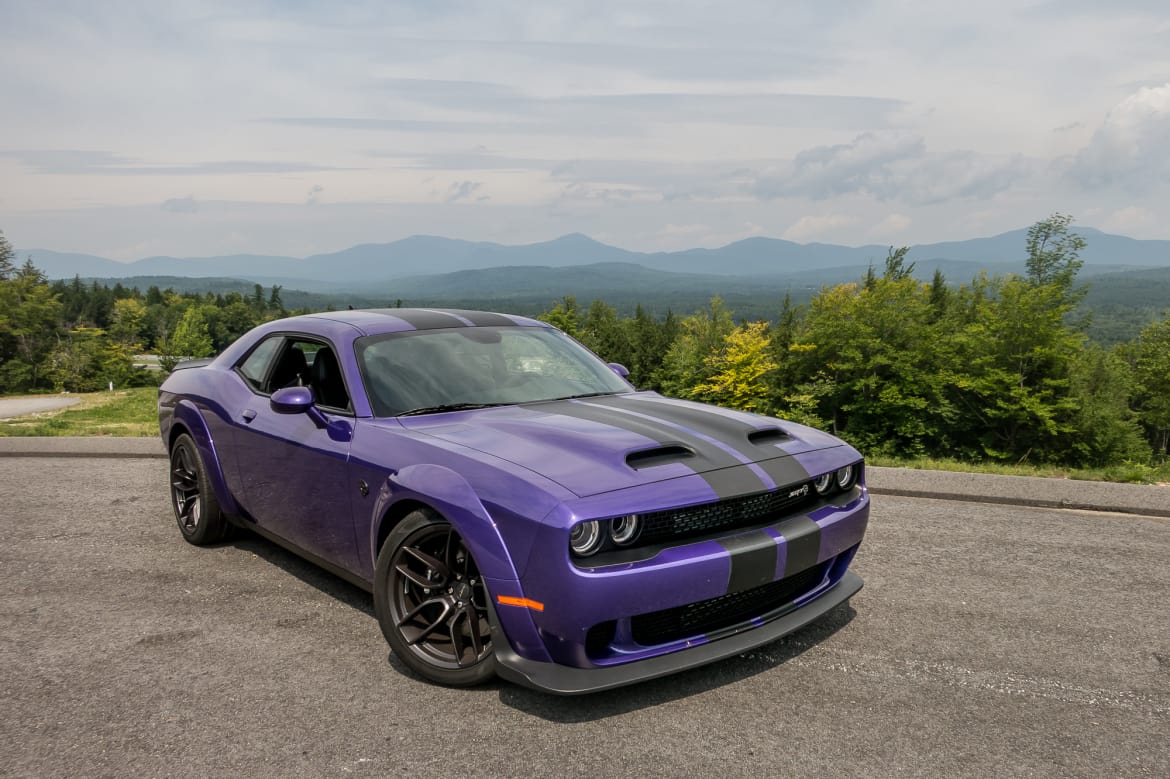 Even in the “new normal,” nostalgia looms large for the days of tailfins and muscle cars. While any of the classic pony cars still around today — the Chevrolet Camaro, Dodge Challenger and Ford Mustang — suffice for the see-and-be-seen ambiance of an evening (hopefully not stranded) at the drive-in, the Challenger’s directly referential throwback body style feels like it retains the most of era-appropriate Greased Lightning charm. Just make sure that if you pony up for, say, the 717-horsepower SRT Hellcat version, be polite and stay until after the credits roll so as to avoid drowning out the dialogue up on the screen with the rumble under your hood. 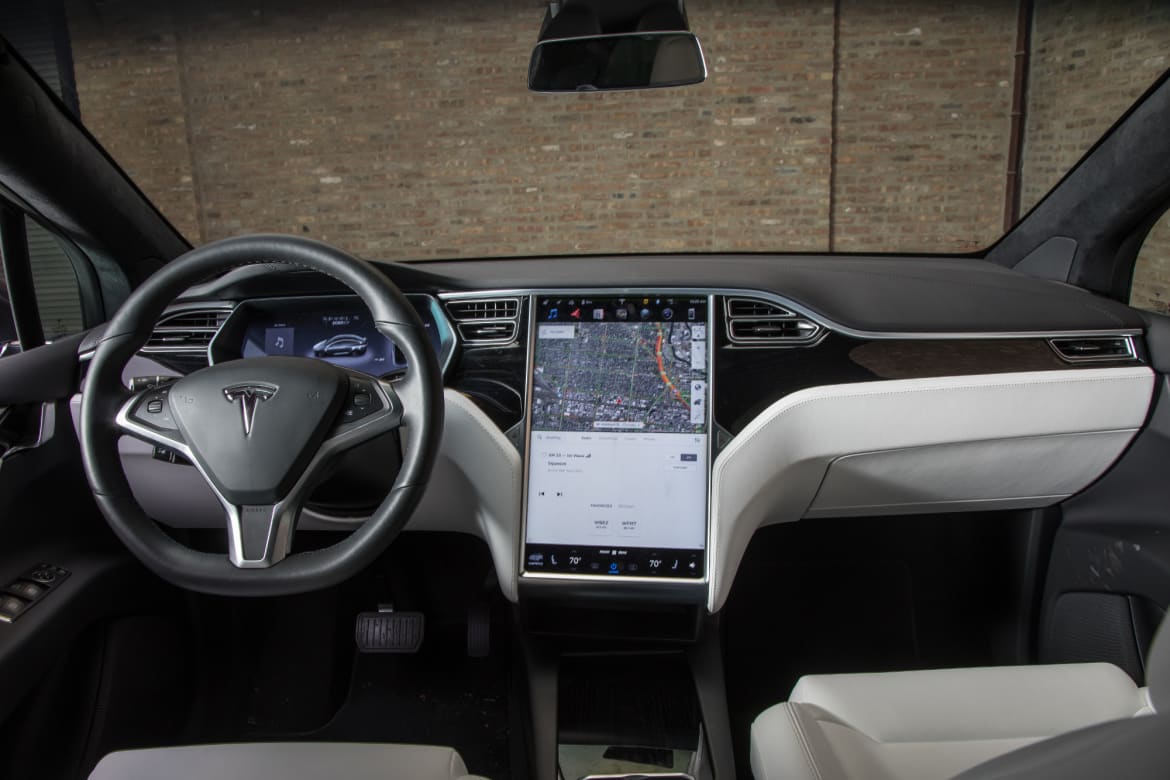 If you’re already inclined toward the brand-enthusiast-bolstered Tesla Model X, you certainly don’t need our endorsement to convince you. But in our time with Tesla’s first all-electric SUV, we took quite a liking to its rocketship looks and matching acceleration, over-the-air software updates, natural-feeling brakes rivaling even those of non-EVs, fatigue-mitigating semi-autonomous driving capability for commuting in heavy traffic, a roomy and nicely appointed cabin, and up to 328 miles of range.

But for our purposes here, maximizing visibility maximizes the movie-watching experience, and to that end, the Model X marks the spot. The Tesla’s tall side windows and large windshield that stretches over the first and second rows combine to ensure you can see as much of the screen, unobstructed, as possible. (Just don’t get distracted by that other massive screen — the Tesla’s 17-inch central-control touchscreen comprising vehicle controls and infotainment functions.)

When you’re dropping $420,000 on your ride, you have the right to expect decadently indulgent comfort in completely random scenarios. While the Cullinan’s Viewing Suite is more likely intended for taking in, like, a polo match or something, it’s perfectly applicable here … say, for example, you want to get audience reactions to a film you financed from real, salt-of-the-earth Americans.

Push a button on the open tailgate and a two-seat, leather-covered bench with a cocktail table and two collapsible chair backs smoothly slides out to create a delightful little display of conspicuous consumption. Want the drive-in experience but don’t wanna expose yourself to the envious gaze of the plebs? It’s OK, just blame ’rona anxiety, repair to the second row and relax with a snort of whiskey from the custom, console-stored decanter and tumblers, or pop a bottle of Cristal from the built-in Champagne fridge and have a Rolls-branded flute of bubs. To quote Ferris Bueller: “It is so choice. If you have the means, I highly recommend picking one up.”