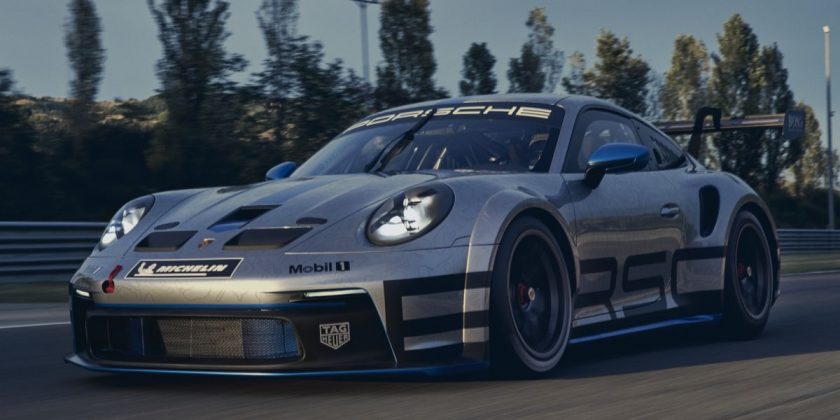 Porsche has unveiled the 992-generation 911 GT3 Cup, the car that will enter one-make Carrera Cup racing series in various countries as well as the Porsche Mobil 1 Supercup, which has run as a support racing series on the Formula 1 calendar. Like its predecessor, the race car has arrived before the road car.

The 992 GT3 Cup can be specified with choice of three exhaust systems to suit various racing series and regulations encountered. As before, engine outputs are sent to the rear wheels through a six-speed, single-clutch paddle shift sequential manual gearbox and mechanical limited-slip differential.

The shfit barrel actuator is now powered by an electric servo motor instead of the previous pneumatic operation, offering even quicker gear changes and the ability to perform live diagnosis as well as a reduced risk of damage in the event of gearshift errors, says Porsche.

The 992-generation GT3 Cup racer has more aluminium in its bodyshell construction, now with 70% aluminium and 30% steel compared with the 30% aluminium/70% steel construction of the 991.2-generation Cup car. The new car’s dry weight gain by 35 kg over its predecessor to 1,260 kg is attributed to the additional struts in the steel safety cell.

Here, a roof escape hatch is added to comply with the latest FIA safety standards. All window panels are made of polycarbonate with scratch-resistant glazing, while the doors, engine hood and rear wing are made of carbon-fibre reinforced plastic (CFRP). The front bonnet is made of aluminium for lower repair costs in the event of damage sustained in a crash.

The latest Cup car adopts the suspension layout of the upcoming GT3 road car; where the rear multi-link suspension is ‘essentially unchanged’ from the production model – itself carried over from the 991.2 GT3 – while the front end shares the double wishbone setup that will also feature in the 992-generation GT3 road car. For the first time, the GT3 Cup adopts electro-mechanical power steering.

Additional improvements with the new-generation Cup car include a complete accessory kit when purchased new from Porsche Motorsport, which includes, among others, all special tools and wishbone spacers for track adjustment. This enables a new GT3 Cup to be ready to race without customer teams having to order said parts seperately, says Porsche. Inside, the seat in the GT3 Cup can now be adjusted for height in two levels, while the redesigned multi-function steering wheel takes after that in the Group GT3-class 911 GT3 R racer. Illuminated buttons have been rearranged following driver feedback, where the 10-button rubber switch panel (RSP) resembles a control panel section in the 919 Hybrid prototype endurance racer.

The driver also gets a redesigned 10.3-inch colour display that prioritises key information. Meanhwhile, optional functions such as ABS and traction control are stored in the system, and can be activated by a digital code. In most Carrera Cup series and the Supercup series, regulations dictate that these are switched off. There are also improved safety quick releases for inside door openers, a redesigned electrical system without plug fuses to save weight in the wiring harness, and automatically activating hazard lights should the car stall at the start of the race.

Carried over from the 991.2 race car are the locations of the water radiators directly behind the front apron, which was deliberately retained in order to discourage overly aggressive driving, says Porsche. That said, internal strut placement helps ensure that minor nudges go unpunished.

The new, 992-generation 911 GT3 Cup is able to run on synthetic fuels, which significantly lowers CO2 emissions, says Porsche, who also expects the new car to improve on lap times by 1%, depending on circuit. Deliveries to teams will commence February 2021, and the car is available now at 225,000 Euros (RM1,105,437) excluding local taxes.