Feel Shut Out of the Hot-Car Market? Lower Your Standards.

All Bryan Barlow wanted was a 1965 Chevelle. “I’d been collecting parts to build one for quite some time,” he begins. “I just couldn’t find a good car for it all to go in, at least for what I could afford.” So when a close friend called to report that his neighbor was looking to sell just the car Bryan wanted, he ran right over. “I’m like, ‘So where is it?’ He says I’m standing right next to it. I look at the car that’s next to me. Then I look at him. ‘Dude, that’s a Plymouth!’ 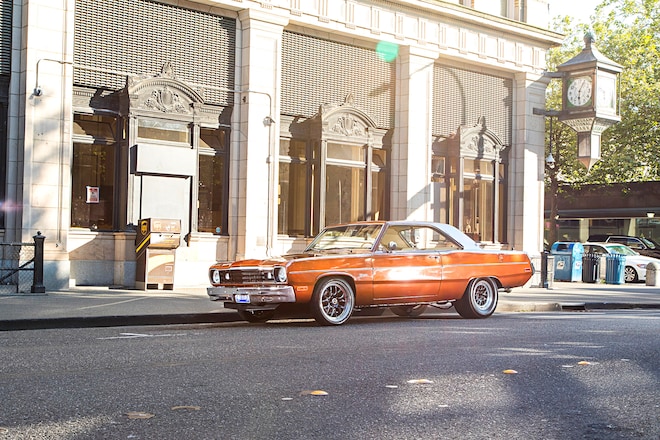 “Todd Schiewe is one of my closest friends and a great guy. But he’s not really a car guy. He just saw an old car that looked kind of like the cars I showed him.” 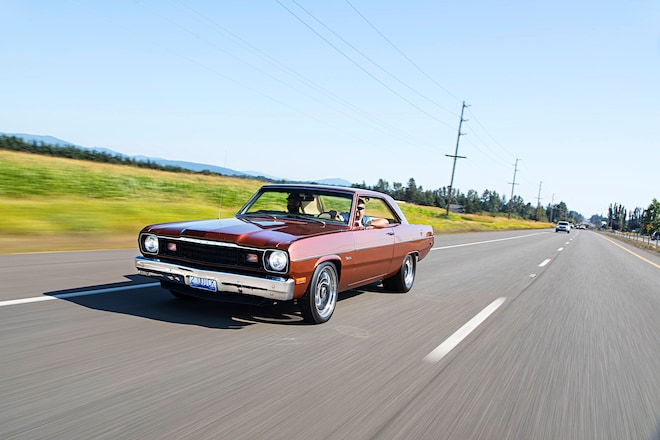 What Bryan didn’t realize is that Schiewe inadvertently gave him a gift far more valuable than a low-buck Chevelle. He gave him a taste of freedom. “So I get to looking at the thing,” Bryan continues. “It actually ticks all the boxes: it’s a hardtop, it’s solid, it doesn’t really need paint or anything.” 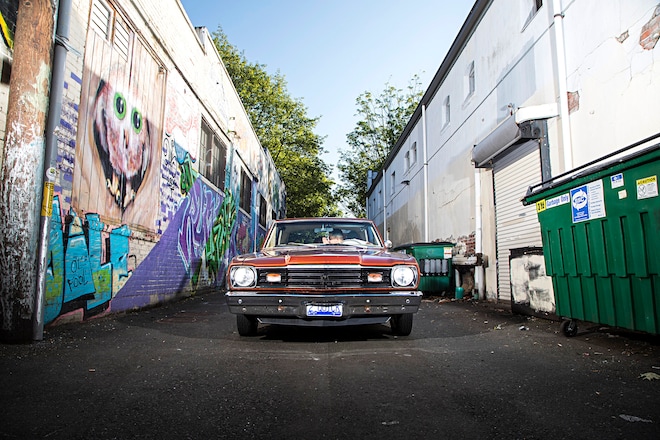 Though he continued his quest for a Chevelle, the Scamp remained in the back of his mind. Bryan began to explore the prospect of building a Chevy-powered Plymouth. But as he asked around, he discovered something: the deep rift between Chevrolet and Mopar worlds. “I was shocked when I heard that this rivalry even existed,” he exclaims. “I had to do it.” 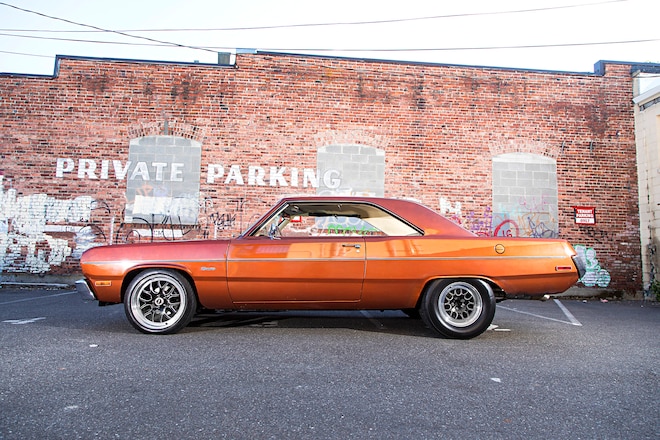 The guys Bryan first hired to make the changes cut the car up within 24 hours, but took six weeks to return a simple phone call. “When I went looking I realized that there was a problem: the car had been cut apart by people who had no idea how they were going to put it back together.” Not surprisingly, the shop and so-called fabricators parted ways. And the shop really didn’t want anything to do with Bryan’s poop-glitter orphan. 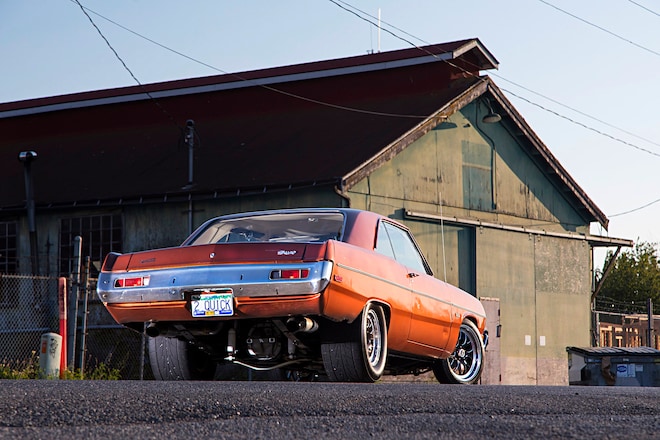 “There were awesome race cars being fabricated around my car,” he recalls. That’s when shopkeeper Jack Kolinsky kindly asked Bryan to make other accommodations for the Scamp. “His son Kyle was very quiet, but the look on his face said take your car home.” Bryan declined. “I said, ‘someone here is clearly capable of putting my car back to one piece.’” The gentlemen they are, Jack and Kyle resisted the urge to just kick the old coupe to the curb. Instead, Kyle started to weld. Bryan gladly paid but declined to take the car home. “Over the course of the next two and a half years I would sneak parts into the shop and place them in the locations I wanted them installed,” Bryan says. “We had little to no communication and the parts found their way on the car. 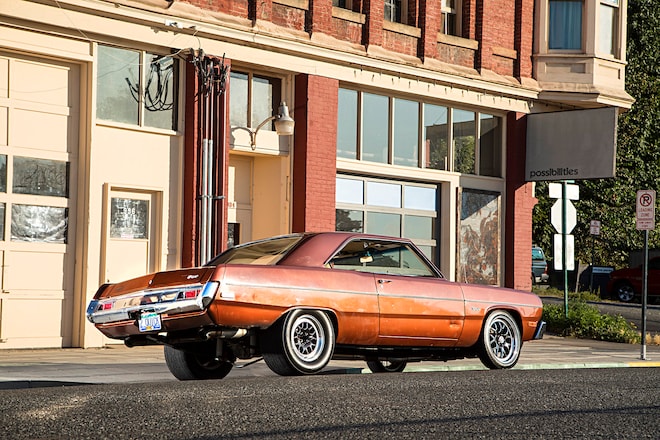 “This was the beginning of a strong friendship,” Bryan says, laughing. And it was; they even tagged along with Bryan and his wife Kassy for the photo shoot. 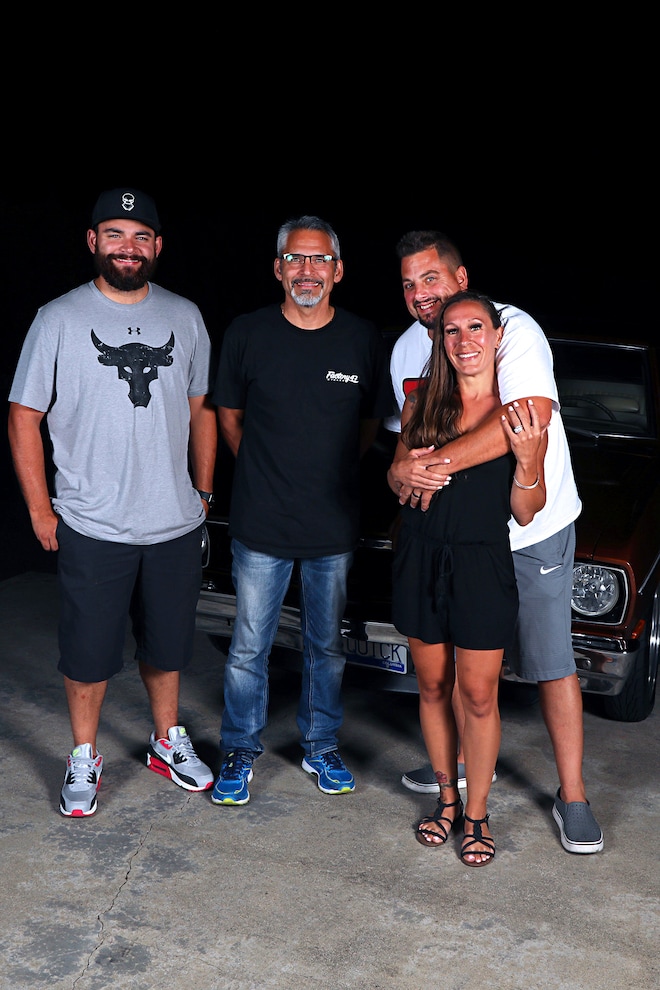 “Today we look back and laugh at the fact that everything that didn’t fit the car was made to fit beautifully,” Bryan says. “If you look on the Internet, you’ll see a bunch of LS-swapped Mopars like this. But none of them ever get finished.” And for good reason: the combination requires the elimination of a not-so-modest chunk of K-member, which of course requires some fancy engineering as it’s the foundation for the car’s suspension. They went so far as to modify the trans crossmember for exhaust so discretely, you’d think the factory anticipated dual pipes. 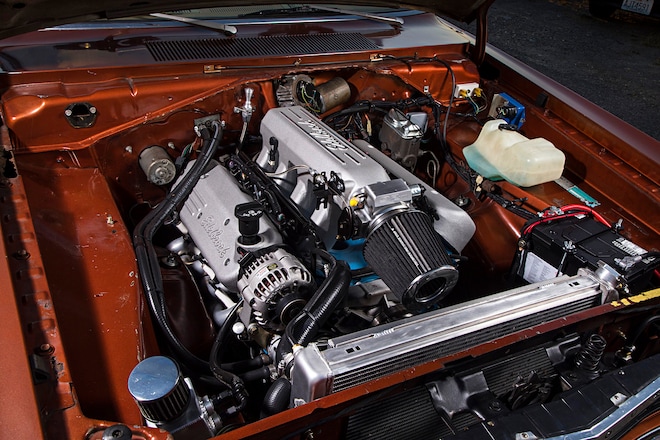 All of this was done in deference of a 424-inch LSX. Though relatively modest on paper (only 9.8:1 static CR for example), Brian coaxed 565 lb-ft torque at 4,450 rpm and 628 hp at 6,750 rpm (and that’s without any spray). But then again, as a professional tuner, it’s Bryan’s job to do just that. And as Canada’s west coast rep for Edelbrock, it’s also his job to showcase his employer’s wares, hence the abundance of the company’s products. In fact, we discovered the car parked in front of the Edelbrock trailer at Goodguys 32nd Pacific Northwest Nationals in Puyallup, Washington, where it angered Mopar fans and delighted LS devotees all weekend long. 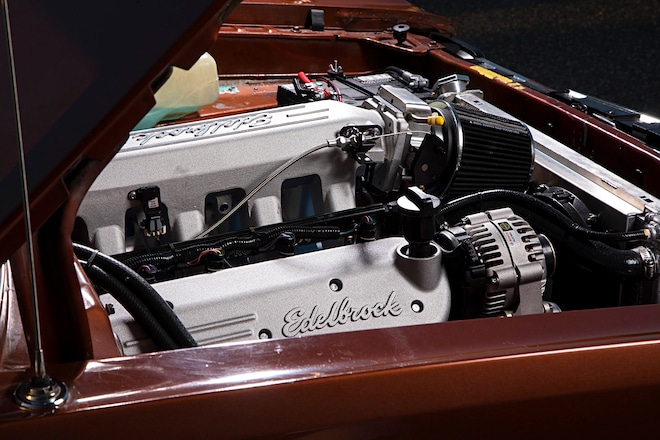 Despite the shabby presentation, Bryan holds the car to some pretty high standards. “The car was purposely built to terrorize the street,” he says. “We built it with tech and safety in mind, but we really wanted an all-around tire-shredding street machine that required little to no maintenance, it had to be original and it had to be driveable, reliable, and something the entire family could get in and run 10-second slips.” To that end, Kassy is a regular fixture behind the wheel for block-long burnouts. He even (possibly foolishly) let this editor drive the car. 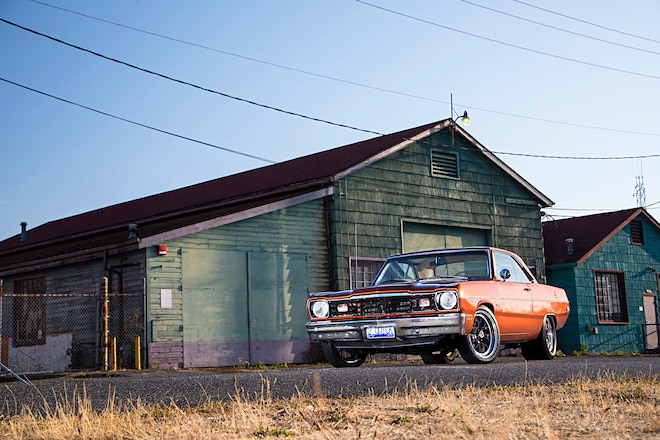 “We built the car with a rain-or-shine attitude; work boots and spilly drinks were acceptable knowing that it was going to get door dings and rock chips,” he concludes. And to that end, he even laughed off the chromoly driveshaft that got twisted up the week after we shot the car. In fact, he described it with an “LOL!” 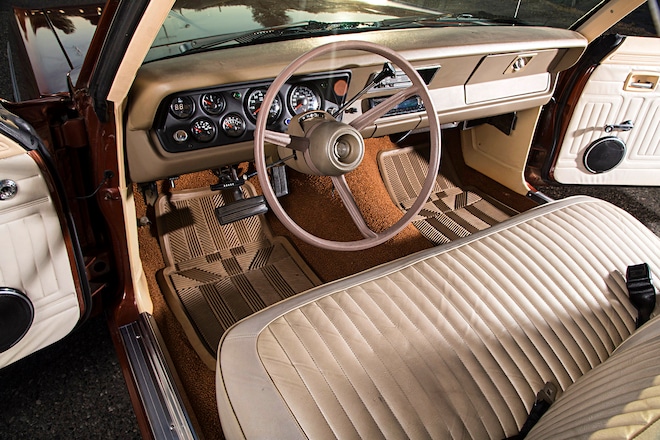 Now we’re not saying that Bryan Barlow is going to pass on a 1965 Chevelle for a good deal, but he’s not actively looking for one, either. “I realize now that I couldn’t do this in a car like that,” he admits. “I’d be scared I’d screw it up!” 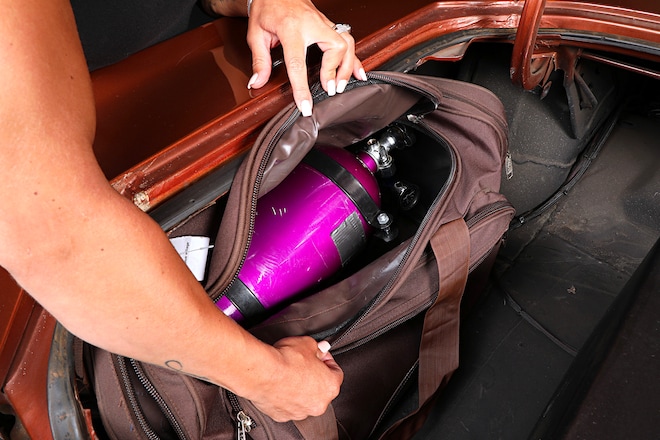 Tech Notes
Who: Bryan and Kassy Barlow
What: 1973 Plymouth Scamp
Where: Chilliwack, BC, Canada 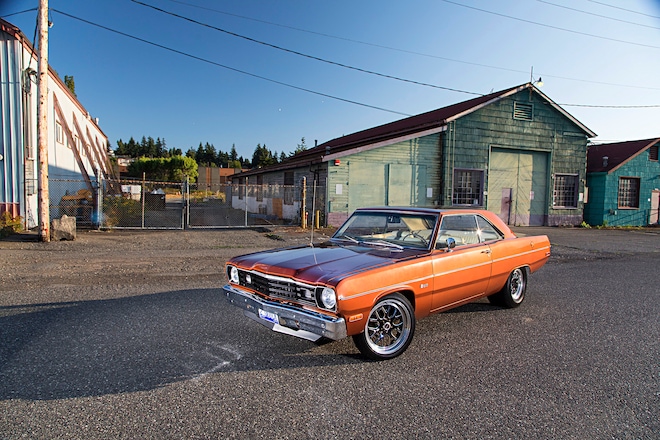 Engine:
Ron Croteau at the Langley, BC, Lordco location built up an LSX block with a Scat Performance 4.1-inch stroker crank, H-beam connecting rods, and 4.06-inch Mahle slugs. SD Performance put together a set of its CNC-machined cathedral-port heads. “Dave is a master of porting, and his wife, Lisa, did a great job of assembly,” Bryan says. The relatively low 9.8:1 static CR gives Bryan the opportunity to run a fairly streetable cam on pump gas: the Edelbrock 2219, which has 230/234 duration (at .050-inch) and 0.613 inches of lift. 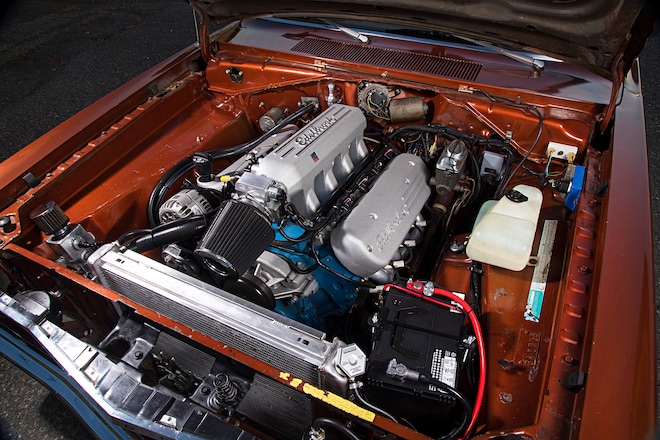 Induction/Exhaust:
Bryan feeds the engine with an Edelbrock Pro Flo 4 system. The tower atop the engine is a CNC-ported Edelbrock Pro XT manifold. The engine also has a small hidden nitrous system to cover any mouthing-off that its owner may occasionally do. Kolinsky Trucking (Jack and Kyle Kolinsky) built 1 3/4-inch headers to fit the odd combination. They feed 3-inch pipes with an X-pipe and the largest bullet mufflers that would fit under the car. That wasn’t enough, so they terminated the pipes with small resonators. 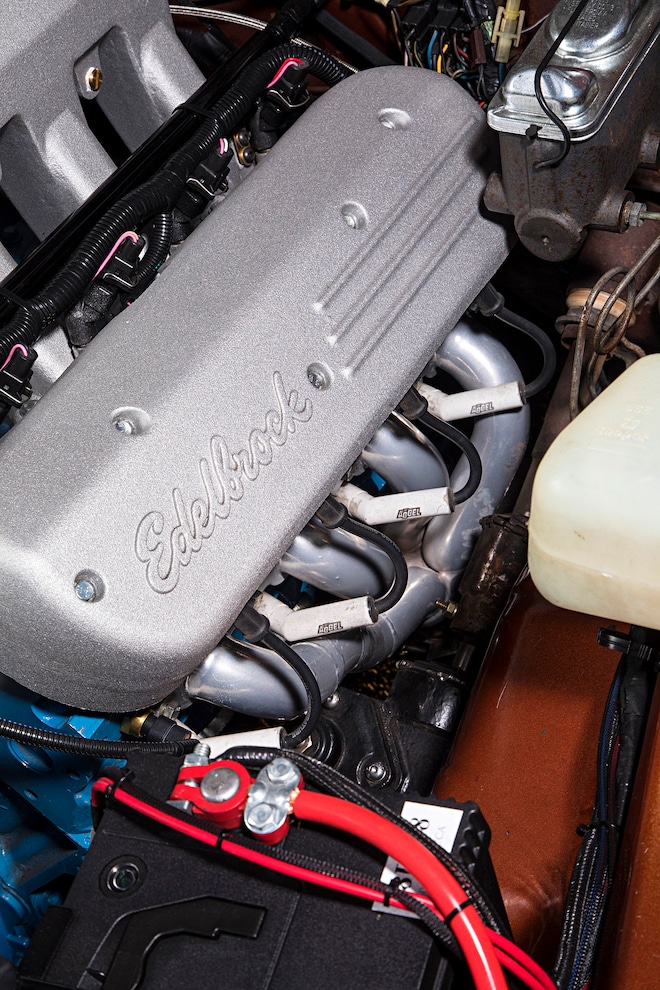 Transmission:
Bob Dyck in Abbotsford, BC, built up a 4L70E with a host of TCS components to give it the fortitude to handle the big engine and tires. Harley Hamilton at Drive Products in Langley, BC, built the unfortunate chromoly shaft that got, well … the shaft on a hard launch. 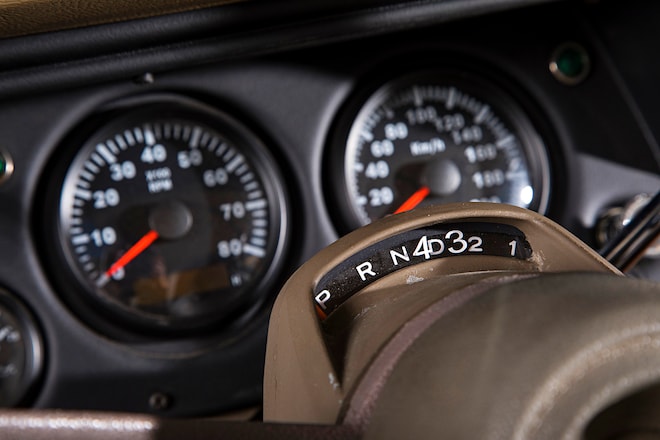 Murphy’s Auto Repair in Chilliwack built up the Ford 8.8 with a 3.55:1 gear on a Murphy’s locking carrier. Quality Gear machined the 33-spline axle shafts. 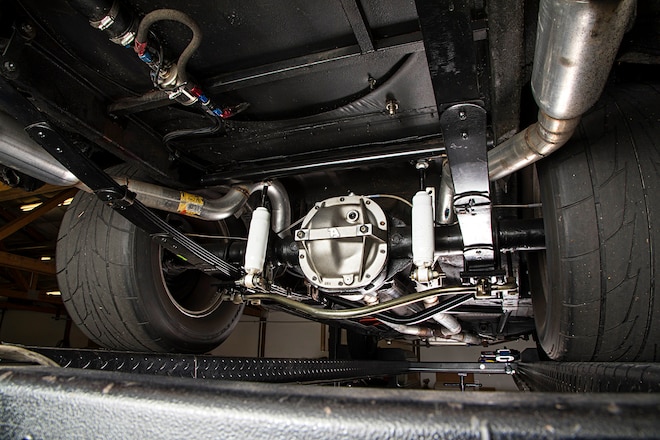 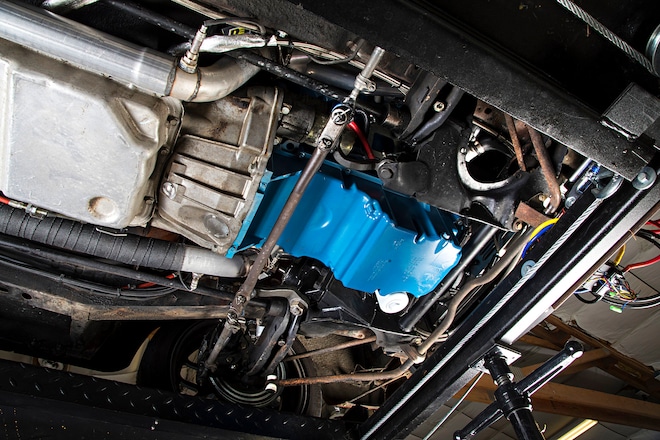 Wheels/Tires:
Bryan found the wheels and tires secondhand—a Ford dealer parted out a Cobra drag car and unloaded the rolling stock on the cheap. They’re 18×4 and 15×11 Weld Racing RTX wheels with 185/55R18 Mickey Thompson Sportsman SRs up front and 325/50ZR15 Nitto NT-555R Drag Radials out back. 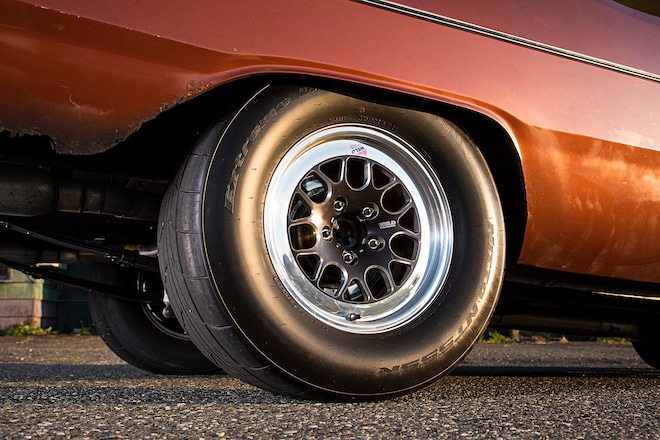 Paint/Body:
If there’s an official color for the Malaise Era, it’s Autumn Bronze Poly. Bryan and Kassy’s Scamp wears its original finish, which would surely surprise even the people who applied it 45 years ago. Bryan regards the occasional rusty panels as his weight-savings program. Jack and Kyle Kolinsky installed the mini-tubs. 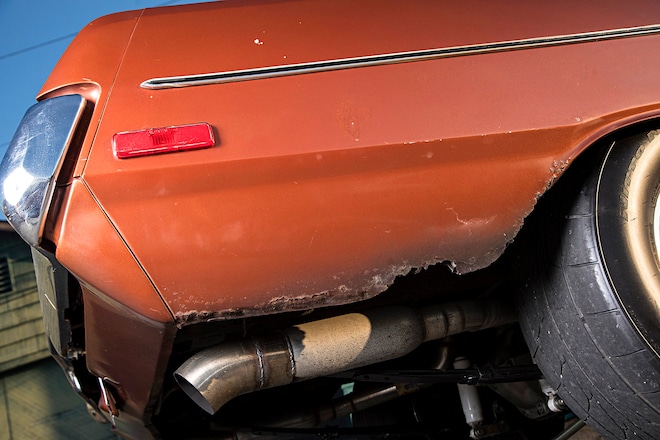 Interior:
Plymouth called the interior Medium Parchment but it’s probably more accurate to call it four or five shades of parchment as the color varies by the composition of the plastic. The only thing Bryan did was pressure wash the entire car and install new carpet from Auto Custom Carpets and fresh sillplates. Oh yeah, they also installed Speedhut gauges in an AutoMeter Direct-Fit insert. 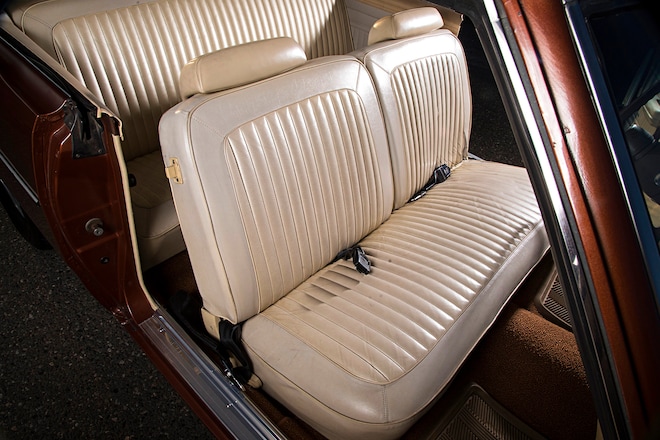