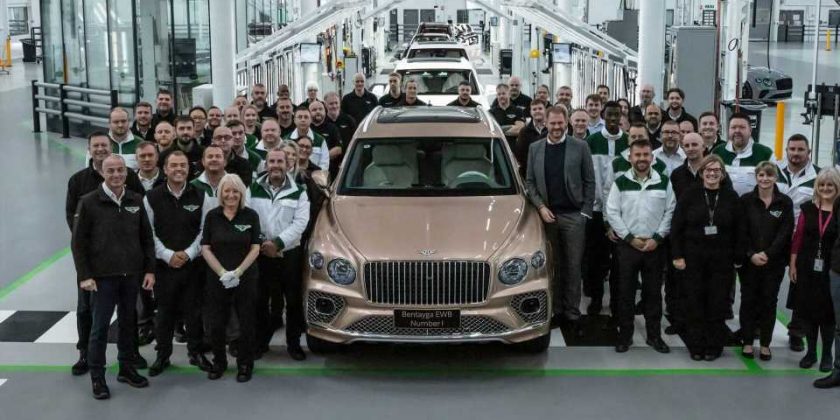 The Bentley Bentayga Extended Wheelbase is now officially in production. The stretched luxury SUVs hits the assembly lines at the automaker’s factory campus in Crewe, increasing the Bentayga family to a total of five models. Since its launch, the Bentayga EWB has accounted for about 40 percent of all new Bentayga orders and is currently Bentley’s best-selling model.

Unveiled in May this year, the Bentayga EWB takes 132 hours of work from Bentley’s skilled craftspeople. The process includes 10 hours just to curate the wood for each model and more hours are needed for all the different customization options. The first Bentayga EWB customers have already personalized their orders and are soon going to receive their bespoke vehicles of the company’s “new sector-defining pinnacle model.”

The Bentayga EWB is not just a longer version of Crewe’s most luxurious product in Bentley’s current model lineup. It gets special treatment in the form of the so-called Airline Seat option, which packs 12 electric motors and offers 22-way adjustment. To ensure the optimal seating position, the chairs can perform up to 177 pressure changes. More than 50 percent of the firm’s customers opt for this feature.

In terms of dimensions, the Bentayga EWB is 3,175 millimeters (125 inches) long or 180 mm (7.1 in) longer than the standard model between the axles. The customers can have it in either a standard five-seat or an exclusive four-seat configuration with two captain’s chairs.

There’s just a single engine option for the Bentayga EWB. It is a twin-turbocharged 4.0-liter V8 engine, good for 542 horsepower (398 kilowatts) and 568 pound-feet (770 Newton-meters) of torque. Despite its size, the stretched SUV reaches 62 miles per hour (100 kilometers per hour) in just 4.5 seconds, according to the latest information released by Bentley. The top speed stands at 180 mph (290 kph).

“In our Crewe, UK Dream Factory, we combine the highest levels of innovation, craftsmanship, and sustainability,” Peter Bosch, one of Bentley’s highest-ranked executives for production, comments. “Each car produced contains leading technology and is an artisanal piece of art, handcrafted using only the finest of materials, in true Bentley fashion.”

The Bentley EWB is now on sale only in certain markets.