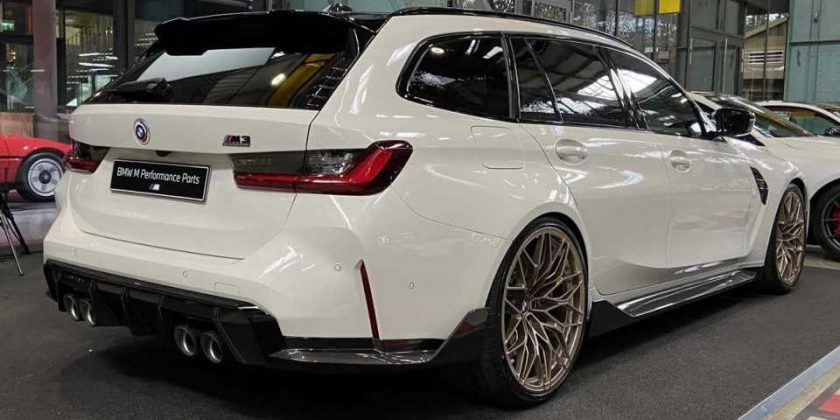 The M3 Touring is quite possibly all the car you’ll ever need, but it certainly doesn’t come cheap. It costs just under €100,000 at home in Germany and you can easily reach into the six-figure territory by ticking a few boxes on the options list. Whoever configured this build must’ve ticked nearly all of them since we get to see an Alpine White car with an extended array of upgrades from the M Performance catalog.

The most eye-catching option is the wheel design, finished in what BMW refers to as Frozen Gold. Wrapped in Yokohama tires, the alloys can be seen here with special valve caps proudly carrying the M logo. We’d reckon those carbon fiber front canards on a wagon are overkill, although the rest of the aero package does lend the M3 Touring a more muscular appearance.

Exhibited at the BMW Welt in Munich next to the company’s headquarters, the belated AMG C63 Estate rival features beefy side skirts and end plates making it wider than it already was in stock form. Codenamed G81, the first-ever M3 with a long roof also has carbon fiber finishers for the quad exhaust, but the roof is made from conventional metal. That’s because BMW decided not to reconfigure the assembly line to accommodate a carbon fiber roof for the M3 Touring, knowing it wouldn’t have been feasible for a relatively low-volume M car.

The museum in Germany also hosts a different example of the super wagon, without the M Performance Parts but with an Individual Le Mans Blue paint. We’ll remind you all M3 Tourings are going to be assembled in Competition flavor with an automatic transmission and xDrive.

As with the recently facelifted 3 Series lineup, the do-it-all M3 gets the iDrive 8 with the side-by-side screens, shared with the M3 Sedan. However, the two performance cars lack the sharper-looking headlights introduced with the 3 Series LCI. The lineup is a bit confusing considering the mechanically related M4 in all of its forms has yet to switch to the latest infotainment as not even the new CSL has it. The M4-based 3.0 CSL coming before the year’s end is expected to stick with the iDrive 7.

In the meantime, the order books for the M3 Touring will open in September, with the start of production planned for roughly a month later. As previously mentioned, the car won’t be coming to the United States where BMW said homologation costs would’ve been too high.