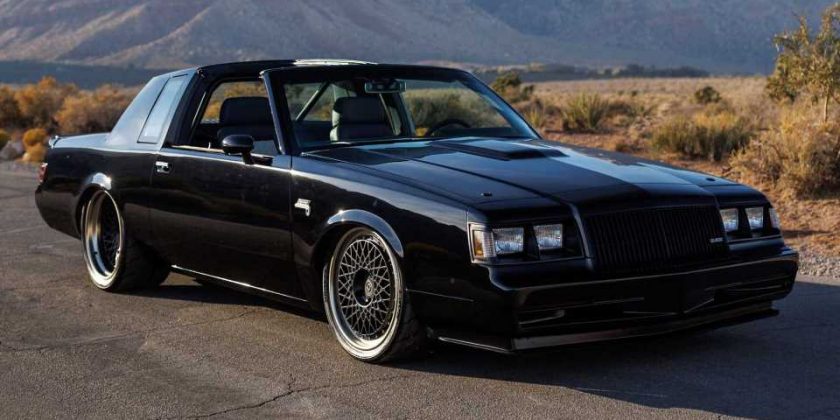 Comedian and actor Kevin Hart is an auto enthusiast who has a passion for restomods of American muscle cars. The latest one to join his collection is a heavily modified 1987 Buick Grand National with T-tops by Salvaggio Design.

Rather than the LC2 turbocharged 3.8-liter turbocharged V6 from the ’80s Grand National, this one gets power from the LF4 3.6-liter twin-turbo V6 from a Cadillac ATS-V. However, to be more like the original, it’s running a single 67-millimeter Boost Labs BL67R ball-bearing turbo with a billet wheel. On 103 octane, the dyno shows the powerplant putting down 650 horsepower (485 kilowatts). The plan is to add new camshafts to push the output to 700 hp (522 kW) on race fuel.

Salvaggio Design replaces the original GM G-Body platform with its own laser-cut and TIG-welded frame. A bolt-in subframe improves rigidity over the original. The suspension includes Ultimate Performance coilovers and a four-link rear with a Panhard bar. For stopping, this Grand National has Brembo GT brake calipers that have six pistons in front and four pistons in the back.

Hart names his custom cars, and this one is the Dark Knight. The similarities to the Caped Crusader are quite subtle, though.

The comedian requested a vehicle with a sleeper appearance. This Grand National doesn’t look particularly different from stock on the outside, but if you know what you’re looking for, there are quite a few changes. For example, the front bumper is now carbon fiber and has a design for improved cooling ability. The hood, rear spoiler, and mirror caps are also carbon. Some of the smaller touches include billet door handles with carbon inlays.

The Dark Knight wears BASF black paint with no tints or extra finishes to the material. It rides on 19-inch HRE 501 wheels with a nickel finish. They’re nine inches wide in front and 11 inches wide at the back.

Like the exterior, the cabin looks similar to the original layout but with lots of subtle changes. The seats feature a mix of light gray and dark blue leather, which evokes Batman’s costume. Bronze stitching takes inspiration from the Caped Crusader’s utility belt.

Hart’s Grand National was on display at this year’s SEMA Show. His ’69 Plymouth Roadrunner restomod was also there. Salvaggio Design built it, too.