AutoTrader designs show cars of the future will become a home away from home with a relaxation pod in place of traditional seating. Concept designs were put together by the online marketplace after a survey revealed what features road users would most want to see inside their future vehicles.

A quarter said a built-in mattress to catch up on sleep during the trip was most desired while other popular additions include a library, TV screen and yoga mats

The 2050 concept car is fitted with windows which extend across the entire roof to provide more headroom for passengers to walk around.

The 360-degree panoramic views will allow passengers to relax and enjoy the views as the vehicle drives itself to a destination.

AutoTrader concepts show windows could be blacked out with the touch of a button to allow passengers privacy to enjoy their mobile living room. 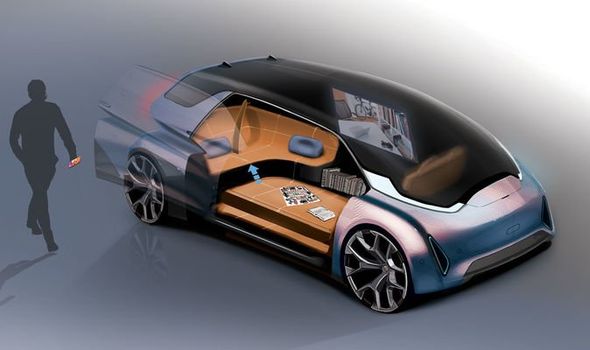 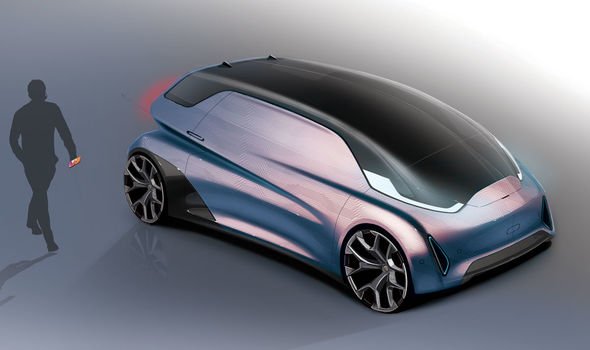 Further testing of autonomous technology means driverless cars capable of transporting passengers without any control could become a reality in just decades.

AutoTrader claims advances in battery technology could mean electric vehicles are able to run for over 1,000 miles without needing to be recharged.

Futurist Tom Cheesewright was involved in the concept design alongside AutoTrader and said the car of the future will give designers room to focus on comfort and style.

He said: “Tomorrow’s car takes you from A to B with minimum fuss and in maximum style.

“Future technologies will give designers free reign to create more space and comfort so that we can get on with our lives while an AI takes care of the driving.

“While our cars won’t be flying any time soon, we can all benefit from cleaner, quieter, safer roads.

“In just twenty years, the age of the combustion engine will be well and truly over.”

A revolutionary digital paint system could also be installed on future vehicles which will allow motorists to change the look and feel of their cars at the touch of a button.

The technology could save motorists thousands of pounds on professional spray jobs and offer an element of vehicle personalisation.

AutoTrader says advances in technology will mean colour-changing cars controlled through a mobile phone application could be implemented as early as 2040.

Rory Reid spokesman for AutoTrader said: “The concept of digital paint and the implications this may have for those looking to buy new cars is in keeping with consumer trends and our growing desire for personalisation.

“People are increasingly using technology to express themselves and this tech would remove the need to wait for a colour of car to come into stock or fork out extra to have a car spray-painted a certain colour.” 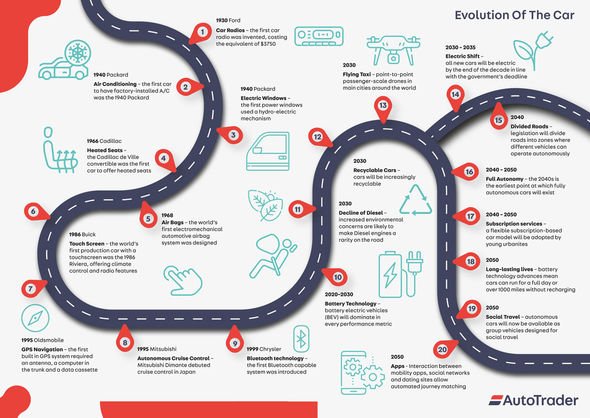 AutoTrader’s Car of the Future report predicts this decade will be the last for the combustion engine as manufacturers squeeze the last few years from petrol power.

At this point, vehicles will become increasingly recyclable while increasing environmental concerns will see diesel engines become a rarity on the road.

The group says the first autonomous vehicles could be in active use by 2040 before further developments are made.

Between 2040 and 2050 cars could become social spies for people with digital personalisation tailoring every aspect of a vehicle.