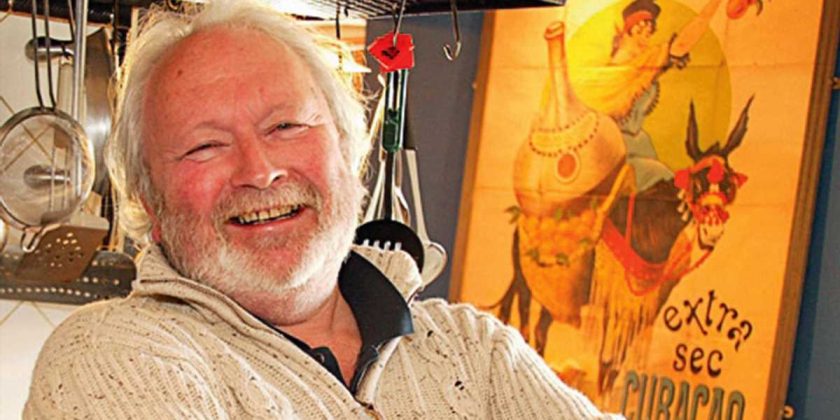 Paul Veysey has been buying and selling car posters for 20 years. Here’s a glimpse of his current offering 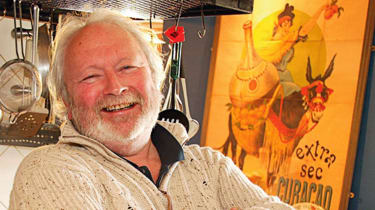 The digitisation of our world has brought many benefits for car fans, and revolutionised how we consume our passion for all things automotive. However, although new media has flourished, more traditional forms have waned in influence.

One prime example of that is the car poster. Once a trusted form of marketing for new cars or events, its importance has been superseded by more cutting-edge, interactive digital solutions. However, there is still a thriving market among collectors and fans for some of the classic posters from years gone by.

One of the foremost experts in the country is Paul Veysey, a poster dealer from Tibberton in Gloucestershire, who turned to trading 20 years ago after a career in TV and radio broadcasting.

Paul is a self-confessed petrolhead, who raced Triumph TRs in Australia, rallied here in the UK, and has owned “oodles of classics” over the years, including MGs and Citroen Tractions, IDs and DSs.

Already a dealer in motoring books, Paul acquired one or two more posters and, sensing a business opportunity, decided to branch out.

“At that point I thought it might be worth going for a tiny niche within a tiny niche market, and that was movie posters, particularly ones featuring motor cars and motor racing in the graphics,” he recalls.

Twenty years on, his website, Drivepast.com, has some of the finest car movie artwork you’ll ever see, spanning a number of decades, accompanied by manufacturers’ showroom posters and beautiful motoring events posters. Buying from other traders and at auction, and selling online and at events including the Goodwood Revival and the Pebble Beach Concours d’Elegance, Paul has built up a healthy customer base.

“A lot of the time I’ll buy posters for people who I know have the motor cars featured in them,” he says. “I have some customers who have fairly serious motor-car collections. They see one of their cars featured in a movie poster or racing poster and have to have it.” Celebrity fans include pop star Jay Kay of Jamiroquai fame, TV chef James Martin and renowned classic car dealer Gregor Fisken.

Prices are obviously dependent on the poster itself and its collectability, but can range from less than £100 to thousands.

The gold standard as far as Paul is concerned is an extremely limited poster advertising a 1950 documentary on Argentinian racing legend Juan Manual Fangio. It depicts him cornering the classic Maserati 4CLT, which is liveried in the nation’s traditional blue and yellow racing colours. “A most beautiful thing,” Paul reflects. He has traded two of these in his career, and was once offered the chance to buy one for an astonishing £10,000. He declined, although he subsequently heard of one selling for around half that.

What makes a good poster is a matter of taste, but obviously vivid graphics and clear messaging are key. And when it comes to car companies, Paul has his own thoughts on who did it best. “Some of the old British stuff for the likes of Jaguar in the fifties was lovely,” he says. “And the French did some fantastic posters, in particular Citroen when they were rallying the ID and DS in the fifties and early sixties.”

When it comes to car film posters, he has a simple rule of thumb. “Generally, the better the poster, the worse the movie. In the early days, the best work was always on the most wretched movies. For the blockbusters there would simply be pictures of the stars.”

And, as posters have declined in relevance, so has their quality. “These days, so many are just computer-generated images of the leading players with some kind of generic background.”

If you like what you see here and fancy a dabble yourself, he has some clear advice on getting started in the poster business. “The first and most important thing is buy what you like, without knowing very much about it. Don’t buy with a view to selling, initially. Over the years you will pick up an appreciation of paper quality, size and smell so you are not getting suckered.”

With those words in mind, we invited Paul to guide us through some of the highlights currently available on his website. 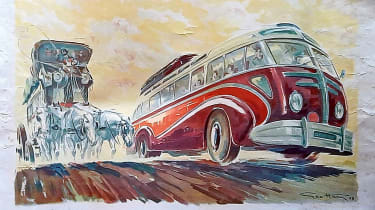 This original lithograph poster was commissioned by France’s Federation Nationale des Transport Routiers to highlight that travelling by its new buses was a better option than horse-drawn carriages. The real story, though, is the artist: Georges Hamel, or Geo Ham as he was known. He was considered the cream of France’s illustrators at the time, and produced a number of posters for Le Mans. He also did some covers for the country’s leading motoring journals. 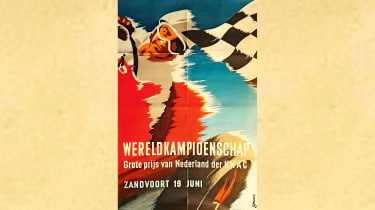 Another ultra-rare poster, this one promoting the Dutch Grand Prix at Zandvoort, is on offer for £1,200. According to Paul, the only other poster for the race he has seen in comparable condition was selling for $4,000. The artwork shows Alberto Ascari winning the 1953 Dutch GP in a Ferrari. In 1955, Juan Manuel Fangio triumphed in a Mercedes. As our image shows, folds are evident, but this is common on most produced prior to 1970. 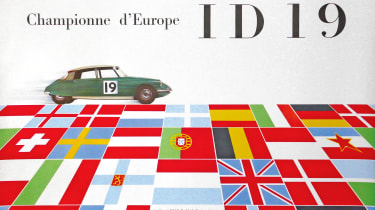 A simple but highly impactful poster produced by Citroen in 1959, when driver Paul Coltelloni won the Rallye Monte Carlo in an ID 19 on the way to claiming the European Rally Championship. Note how some of the flags no longer exist, illustrating Europe’s ever-changing borders. This beautifully preserved poster is on offer for just under £500. 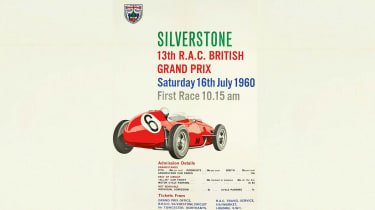 This stunning poster for the 1960 British GP at Silverstone shows how a simple design can be hugely effective. It features the Ferrari Dino 246, which had been raced in previous seasons, and as Paul says: “Whoever decided on the white background was genius, thanks to the red of the Ferrari against it. Then there’s the text colour: green, red and blue. Terrific.” The race was won by Jack Brabham in a Cooper-Climax. British GP posters are still produced but in much larger numbers than in the past and, according to Paul, are of little interest. 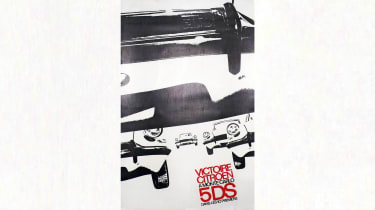 Citroen’s rally success continued into the early sixties, and this one was published in 1963 to mark the DS taking five of the top 10 places in the Rallye Monte Carlo that year. It would be displayed in showrooms, as was common at the time. This is an extremely rare poster, reflected in its current asking price of £795. 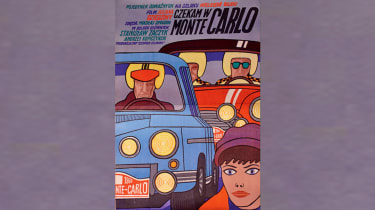 No matter how obscure the movie, if the poster looks good, Paul is interested. This one is for a 1969 Polish release, Czekam W Monte Carlo, which means ‘I’ll Be Waiting In Monte Carlo’. “At some stage, someone with a Renault 8 Gordini is going to come along and take my arm off for this,” says Paul. 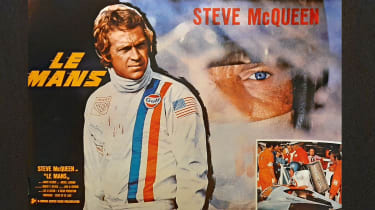 Paul’s website features a number of different posters advertising the iconic 1971 racing movie, but this Italian one, printed specifically for a Swiss cinema archive, is one of the most striking. He says: “This film is probably the most followed motor racing film of them all, and Steve McQueen is always popular. Sometimes the McQueen market plateaus out – but then there will be an auction of one of his motorbikes or jackets, and it comes hurtling back.” 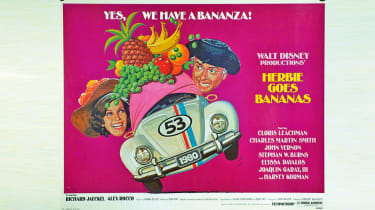 Remember Herbie, the cutesy Volkswagen Beetle that starred in a series of Walt Disney movies in the sixties, seventies and early eighties? As Paul says: “They are films that are very much of their time, and haven’t aged that well. But the poster has aged better than the movie. This is one of the best Herbie ones I’ve seen.” 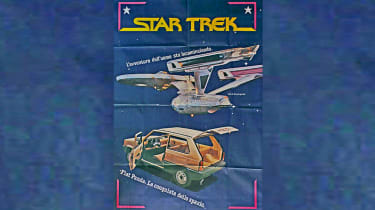 Every so often Paul unearths a poster that is so bizarre it defies logical explanation (even by Mr Spock), and this Italian effort is in that category. “It’s a cross-fertilisation – Fiat sponsoring Star Trek in Italy. The whole schtick is about ‘conquering space’. It’s so obtuse and obscure, but I just thought it was absolutely bananas.” 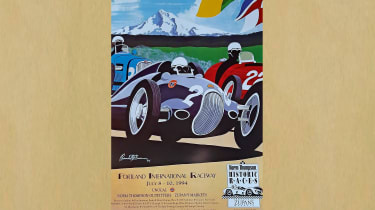 Classic race meetings obvious offer an opportunity for posters to replicate some historic artwork, and that’s the case with this lovely offering highlighting an event at Portland International Raceway in Oregon in 1994. The Auto Union race car in the foreground gives the poster a real dramatic impact. 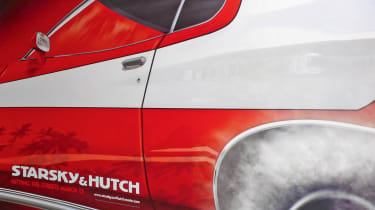 Most will associate the Bay City cops with the iconic TV series of the seventies, starring David Soul and Paul Michael Glaser, but this poster is for the much less fondly remembered movie remake from 2004, which featured Ben Stiller and Owen Wilson. The image is a close-up of the pair’s Ford Gran Torino car; Paul reflects: “This is one of the first contemporary posters I bought; a teaser poster designed to arouse interest before the release of the movie. This is another good example of the worse the film, the better the poster. But it doesn’t necessarily detract from the value; people will buy it for the image.” 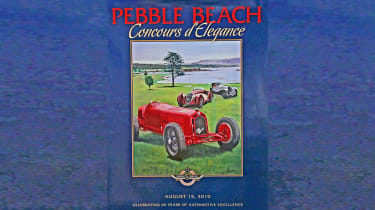 The Pebble Beach Concours d’Elegance is one of the world’s leading events for classic car collectors and this poster, produced for the 2010 event, features an illustration of the Alfa Romeo 8C 2300 Monza of the early thirties. Paul says: “There comes a point with much older cars that people seem to spend their money on the cars, rather than posters.”

Drivepast.com is a good place to start, particularly if you have an interest in cars that have featured in the movies over the years. Other websites worth a look are Toronto-based Collectorstudio.com, Arteauto.com (Texas) and Historiccarart.net (Derbyshire). Emmanuel Lopez’s book Car Posters is available from Amazon (£25) and shows some of the most striking examples from the 20th century, while Paul has also written a book, Motor Movies – The Posters, which you can buy from Amazon.

Which is your favourite poster from those listed above? Let us know in the comments section…